This tutorial will discuss various Types of Classes in Java like Abstract, Concrete, Final, Inner, POJO, Static & other special classes with examples:

In our previous tutorial, we discussed classes and objects in Java. A class in Java is a template or blueprint. It can also be defined as a collection of similar objects. We define objects of type class and then communicate via these objects.

Each object is an instance of a class that has a state and behavior. 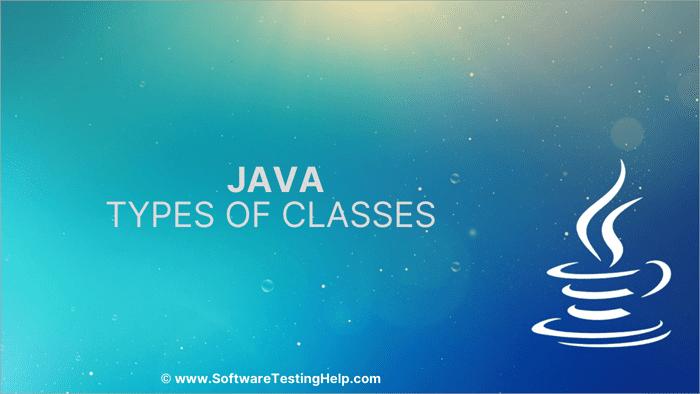 We all know that the class has the following components:

Depending on the different modifiers used, class body specified, and keywords used, we have various types of classes in Java.

In this tutorial, we will discuss each of these class types with examples.

We will also discuss some other types of classes that are considered special classes in Java.

But first, let’s briefly discuss how to import a class in Java along with the Main class in Java that contains the main method or starting point in Java.

Given below is the syntax for the import statement.

If we want to import java.lang package and all its classes, then we can write the following statement:

Suppose we want to include the functionality of the Arrays class in our program, then we can write the following statement:

Note that the JVM does not create an object of class Main. The logic behind this is that as main () is a static method, it can be called without any class object.

Types Of Classes In Java

Now let us move on to the types of classes in Java. We will explain each of these classes one by one followed by the programming examples.

A concrete class is any normal class in a Java program. This class will not have any abstract methods. All the methods in the concrete class are completely implemented.

A concrete class can inherit from another class, even an abstract class or implement an interface. We can instantiate the concrete class and create its objects.

A simple example of a concrete class is shown below.

The above program shows a concrete class. We see that this class has a complete implementation. There is nothing left incomplete or unimplemented.

A POJO class does not have its behavior. However, it may override some methods like equals or interfaces.

Given below is a Java Program that demonstrates the POJO class.

The above demonstration of the POJO class shows that it has a private variable and the getter setter methods for this variable. To access this member variable, we use the getter method. The setter method is used to update the value.

An abstract class is a class that is incomplete or whose implementation is not completed. An abstract class cannot be instantiated. It needs to be extended by the other classes and implement its methods to form a concrete class.

A static in Java in general means the object that belongs to a class and not to the individual instances. So a static member or method in Java need not be accessed with an object but directly using a class name.

A static class in Java can contain only static members. Also, we cannot instantiate a static class.

A final class is a class that cannot be inherited or subclassed. Once a class is declared final in Java, it is a sort of constant and it becomes immutable.

Hence to make a class immutable, we have to declare it as final.

The above program first declares a Base_Class that is marked “final”. Hence when we try to extend it in Derived_Class, we get a compiler error. (The commented line). But we can create its object and call the Display method.

Nested class, also known as Inner class in Java is used to enhance encapsulation. A nested class/Inner class is a class enclosed inside another class.

A nested class has the following structure:

Inner classes have the following subtypes:

This is the inner class that is declared inside an outer class method.

Anonymous inner class is an inner class declared inside an outer class and is without any name.

The way a class has a static member variable, it can also have a static class as its member.

An example of a Nested/Inner class is given below:

Other Special Classes In Java

All the wrapper classes in Java for primitive types (Integer, Boolean, Byte, etc.) are immutable. The String class is also immutable.

We can also have user-defined immutable classes in Java.

For a class to be immutable, it needs to be declared final along with all its data members. Also, the class should have a parameterized constructor. All the member variables should have a getter method but not a setter method.

All the above requirements must be fulfilled for a class to be immutable.

Let’s implement a Java program to demonstrate the immutable class.

Note the commented line of code in the main method. If we uncomment this line, then we will get a compiler error (provided in the comment here) as we are trying to set the value for a member variable.

Note that termination of the application life cycle does not destroy a singleton class like the normal classes. When a class is declared singleton, then we do not create a new instance every time a new request for the object is made.

The same instance is used again and again. This way we can save memory space mostly in the case of multi-threaded and database applications.

We can use a singleton class for activities like caching, logging, etc.

We always return the same instance even though we appear to create different instances.

The Object class is the parent class or the first class in Java. It is at the topmost level of the Java hierarchy.

Declaration for java.lang.Object is:

The following table describes the constructors and methods of the Object class.

Let’s implement an example Java program that will demonstrate some of the Object class methods.

Java provides a feature called wrapper class which has a mechanism that converts primitive data types into objects and vice versa. Wrapper classes are the classes that represent primitive types like int, char, etc. as objects.

Thus each primitive data type in Java has its corresponding wrapper class.

The following table shows the primitive data types and their equivalent wrapper class.

To convert the primitives into objects and objects into primitives, we have techniques called “autoboxing” and “boxing” respectively. Ase Java is an Object-oriented programming language, we always deal with objects, and we also have lots of features like Collections, Serialization, etc. that also need objects and primitive types.

So it’s imperative that we always need objects and primitive types in Java and thus we require these techniques of autoboxing and unboxing.

Autoboxing is a technique of automatically converting a primitive data type to an object of its corresponding wrapper class. For example, conversion of int to Integer class, char to Character class, etc. are instances of autoboxing.

Note: Wrapper classes use the valueOf () method to convert the primitive into objects which are depreciated since Java 5.

The reverse conversion of wrapper class objects into their corresponding primitive data types is called “unboxing”.

Note: Since Java 5, the method intValue () that converts the wrapper object into a primitive type is depreciated.

Given below is an example of boxing/unboxing.

The above program shows autoboxing and unboxing on int value. First, we convert int to Integer object and then an Integer object is converted to the int data type.

Let’s implement a program that demonstrates the wrapper classes present in Java. 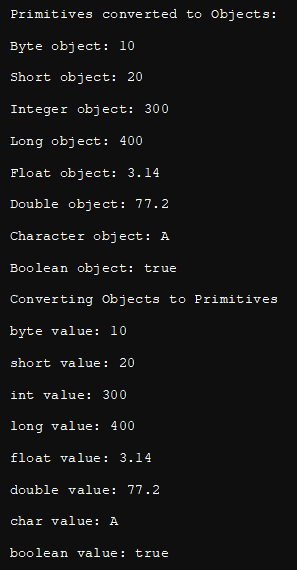 Answer: Java provides a class named “Class” that contains information about all the classes, objects, and interfaces of the running application. The Class class also represents primitive data types and void type.

The Class class is a part of the java.lang package.

Q#2) What is the Normal Class in Java?

Q #3) Is String a Wrapper Class in Java?

Q #4) What is the benefit of Wrapper Class?

Q #5) Why is Singleton Class used in Java?

Answer: Whenever we want a global point of access for a particular object, we go for a singleton pattern that allows us to design a singleton class in which there will be only one instance. Singleton classes are used in caches, thread pooling, database applications, logging, etc.

In this tutorial, we have covered the various class types used in Java. We saw the concrete, abstract, final, static, Nested, POJO, etc. class types. Apart from this, we also discussed Singleton classes, and Immutable classes, and discussed their implementation examples too.

We also covered wrapper classes and object classes in Java. Wrapper classes are the classes that wrap the primitive data types of Java into objects. Object class in Java is the superclass of all the other classes. It is the topmost class in the Java hierarchy.

Now that we have discussed the classes and objects in Java and the class types, in the next tutorial we will proceed with a detailed discussion on constructors in Java.