This Tutorial Explains all about Multithreading In Java, Concurrency Implementation, the Life cycle of a thread, Thread Class Example, Thread using Runnable Interface:

The concurrency in the computer world is the ability of a system (be it application, computer, or programming language) to execute several instances of a program or application in parallel.

By running instances or programs concurrently we ensure high throughput and higher performance as we can utilize the untapped resources like operating system hardware etc. For example, if a system has several CPUs, then the application can utilize these CPUs effectively and increase the throughput. 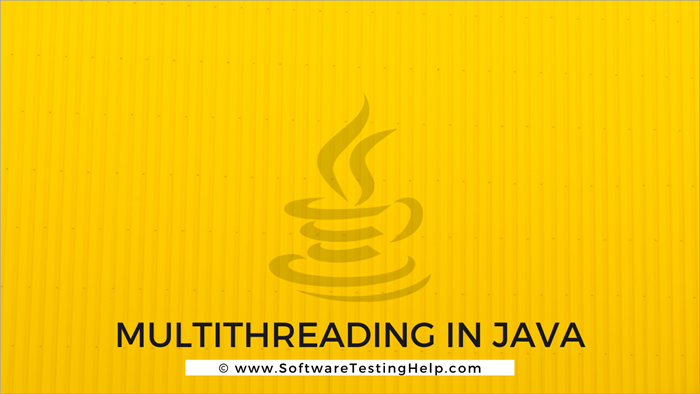 What Is Multithreading In Java

In Java, threads can be viewed as the backbone of concurrency. A thread is an executable, lightweight unit that accesses shared resources as well as its own call stack.

A Java application is one process and within this application, we can have multiple threads to achieve concurrency.

We know that an application running on the system can have multiple instances and these are usually called multi-doc applications. These application instances are called processes. Each of these processes is assigned an execution unit known as a thread.

“This technique of executing or running the multiple threads simultaneously or concurrently is known as multithreading.”

Multithreading simply means that -we have more than one thread executing inside the same application.

Multithreading is depicted in the above diagram. As shown, there are multiple threads that are running concurrently inside an application.

For example, a desktop application providing functionality like editing, printing, etc. is a multithreaded application. In this application, as printing is a background process, we can perform editing documents and printing documents concurrently by assigning these functions to two different threads.

The threads in multithreaded applications run parallel to each other in a concurrent manner. Thus multithreading is also a part of concurrency in Java. Note that though there are multiple threads, they share the memory area thereby saving on memory. Also, threads can easily switch contexts in no time.

Multithreading is mainly useful as it provides concurrent execution of two or more parts of an application. This lets the application utilize the CPU time to its maximum and idle time is kept to a minimum.

The following are some of the terms that we should know in relation to the multithreading environment as they are used frequently.

Multitasking: In multitasking, more than one task is executed at the same time.

Multithreading: Multithreading, as already mentioned is a process of executing multiple threads simultaneously.

Parallel Processing: Parallel processing is a technique where multiple CPUs work simultaneously in a computer system.

Multithreading has various benefits that aid in efficient programming.

The below points will make it clear.

When there is only one CPU in the system, with a single thread then the CPU time is wasted. When the thread is busy using other resources like IO, the CPU is idle. We can improve on this and better utilize the CPU by having multithreaded applications.

By using multithreading, if one thread is done with CPU, then the other thread can utilize it. With multiple threads, CPU idle time will be greatly reduced.

Just like single CPUs, even with systems having multiple CPUs, the multithreaded applications are able to utilize multiple CPUs efficiently.

#3) Improved user experience with respect to Responsiveness and Fairness

The responsiveness of the system improves with multithreaded applications. We do not experience the ‘GUI hanging’ when we have multiple threads accomplishing various tasks in the application and the users do not need to wait for a long time to get a response for their requests.

Similarly, the users are properly services in multithreaded systems.

How To Implement Concurrency In Java

We also have java.lang.Runnable interface that can be implemented by a Java class to abstract the thread behavior. For advanced application development, we can make use of the java.util.concurrent package available since Java 1.5.

What Is A Thread In Java

A single thread can be defined as the smallest and lightweight unit of processing. In Java, threads are used in programs using ‘Thread’ class.

Java threads are of two types:

#1) User thread: user thread is created when the application first starts. Then we can create as many user and daemon thread.

#2) Daemon thread: daemon threads are mainly used in the background and are used for tasks like cleaning the application, etc.

A single thread example is shown below:

The Life Cycle Of A Thread

The following diagram depicts the life cycle of a thread in Java. 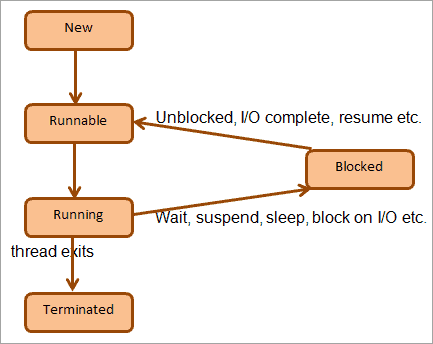 As shown in the above diagram, a thread in Java has the following states:

#1) New: Initially, the thread just created from thread class has a ‘new’ state. It is yet to be started. This thread is also called ‘born thread’.

#2) Runnable: In this state, the instance of a thread is invoked using the method ‘start’.

#3) Running: The thread instance’s start method is invoked and the thread begins execution. This is the running state. Mostly scheduler schedules and manages the threads.

#4) Blocked: There are multiple threads in an application. These threads have to wait for another as their execution has to be synchronized.

So a thread is first created, then scheduled and later the scheduler executes the thread. While the running thread may be blocked or suspended for some other activity. Then it is resumed and while processing completes, the thread is executed.

Enlisted below are some points to be remembered about thread priorities:

We can create a thread using either of the following ways:

The class ‘Thread’ contains the constructors and methods that allow us to create and perform operations on a thread object. Internally the Thread class implements Runnable interface and also extends Object class.

The following table gives a summary of various constructors and methods of a Thread () class.

We will elaborate on these thread methods in our next tutorial on multithreading.

The method start () that is used to start the thread performs the following steps:

The Runnable interface has only one method: 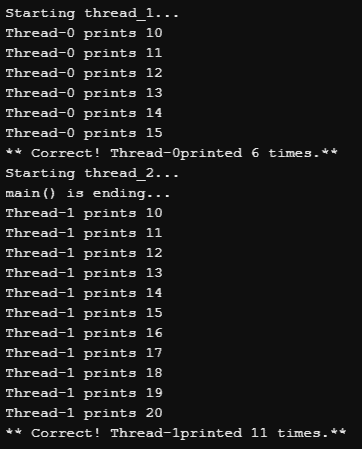 The following example demonstrates the use of the Runnable interface to create a thread instance. 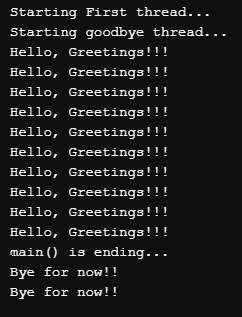 How To Stop A Thread In Java

We have seen the thread examples above. From these examples, we know that when the run method finishes execution, the thread stops or it also stops because of some exceptions.

Earlier versions of Java had a stop () method in Thread class that could be used to directly stop the thread. But it has now been deprecated for safety reasons. Thus we need to employ the other methods in order to stop the thread that is executing.

There are two methods we can employ to stop the thread.

In this section, we will discuss both these methods of stopping a thread.

The specialty of this method is that we declare the boolean variable as “volatile” so that it is always read from the main memory and the program cannot cache it in the CPU cache. This way, there will not be any difference in the values set and read.

The implementation of stopping a thread using a volatile boolean variable is shown below. 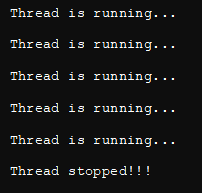 Note: Here we have shown only a part of the output. The thread might run for several minutes before stopping. So that we can obtain different output on different systems.

The following program demonstrates the usage of interrupt () method to stop the thread.

Q #1) Why do we use Multithreading in Java?

Answer: Multithreading allows concurrent or simultaneous execution of two or more threads in an application. The concurrent execution maximizes the Throughput and also utilizes the CPU to its maximum.

Q #2) What is Multithreading? What are its types?

Q #3) What is Multithreading vs. Multiprocessing?

Answer: In multithreading, there are multiple threads for the same or different processes and these threads execute concurrently to enhance the computing speed of a system. In multiprocessing, a system has more than two CPUs and multiple processes execute simultaneously.

Q #4) What are the advantages of Multithreading in Java?

Q #5) Is Multithreading good for gaming?

This is all about the introduction of multithreading. We have discussed the concurrency and multi-threading in Java in this tutorial. We discussed the creation of a thread with Thread class as well as the Runnable interface and have provided appropriate examples.

We have also learned the concepts of a single thread and its creation in detail. The thread concepts including the life cycle of a thread, stopping a thread, types of thread, etc. have been discussed in this tutorial.