In this Spock Tutorials for All, we explored all about Integration and Functional Testing in Spock in our previous tutorial.

This tutorial will cover the most commonly asked interview questions around the Spock framework.

We will also try to understand Spock fixture methods and built-in extensions support which make Spock a really powerful tool for a lot of testing types like Unit, Integration, and end to end. 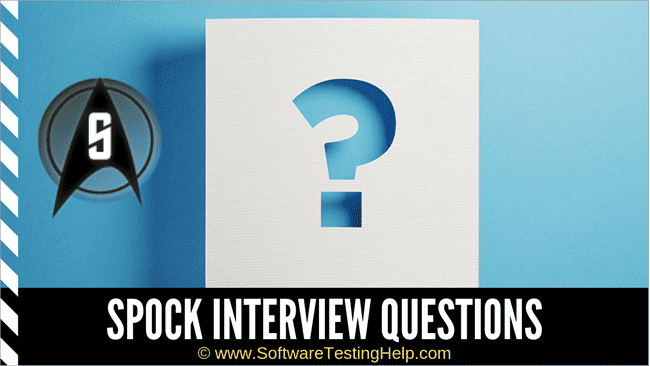 Enlisted below are some of the most commonly asked Spock Interview Questions with answers and examples.

Q #1) Can a Spock test have multiple when and then blocks?

Answer: It’s generally recommended to have small tests or scenarios, as trying to do a lot of things in a single test might be a code smell. Having said that, it’s perfectly valid to have multiple when and then blocks in a test. The test will be considered to be successful only when all the then blocks are in pass state.

Let’s see an example to illustrate this:

In the above code block, you can see that we have 2 when and then blocks.

Q #2) What all fixture methods are available in Spock?

Answer: Fixture methods are like callbacks which are called when a particular event hook is triggered.

Spock provided 4 test fixtures which are triggered against different events:

Let’s see a code sample to illustrate the fixture methods:

Below is the output of the above code sample:

As shown above, you can notice that the setup and cleanup spec are called just once for the entire spec and the setup & cleanup steps/fixtures are called once per test.

Q #3) Can Spock tests be used for testing REST-based services?

Answer: Yes, Spock framework can be used for creating E2E or integration tests for deployed rest services using common Java libraries like Rest template, etc. (Also, please note that, Spock can also be used for running tests for Spring boot based applications as well as with other frameworks like Selenium).

Let’s see this with a simple example that uses Spring’s RestTemplate class and performs a get operation on a public hosted API and checks the response to be non-null.

In the above example, you can refer to Spock specification that’s being used to assert the response of a public API.

Q #4) What are the limitations of the Spock framework?

Answer: Although the learning curve for the Spock framework is not as steep as it’s easy to learn, its declarative syntax makes it highly readable.

Meanwhile, there are a few points that could be considered:

In spite of all the above points, still, the advantages of the Spock framework outweigh the small list of cons that Spock has.

Q #5) Explain some of the built-in extensions of the Spock framework.

Answer: Spock provides a lot of built-in extensions/hooks/ triggers which are mostly annotation-based (We did see a couple of them in the test fixtures section/question).

Let’s see some of the in-built discussion with Examples:

@Ignore: To prevent a feature (or individual method) from getting executed. In order to use simply decorate method (individual test method) or an entire spec, this will ensure that the annotated method or class does not get executed.

@IgnoreRest: This annotation is useful when you just want to select one and execute the rest of the methods of the given Specification.

As seen in the above example, the method annotated with @IgnoreRest will be executed and the rest of the tests will be ignored.

@IgnoreIf: This annotation is a conditional ignore.

For Example: If You don’t want to run some tests on Mac OS, then you can use a combination of @IgnoreIf with System.getProperty(“os.name”) which will ensure that the tests will be run only if the matching OS is found.

Let’s try understanding this with the below code sample:

In the above code sample, we’ve used @IgnoreIf annotation with a condition on System.getProperty which will check for “Mac” in the property value and ignore only if the condition match is successful.

Let’s see one more extension here i.e. @Timeout: This helps to mention a timeout value in the unit of your choice for the test under execution and if timeout threshold is breached, the test will throw an exception.

Another important point to note here is, the @Timeout annotation can be mentioned over the complete spec as well and this will combine the duration of all the individual tests and throw an exception in case of threshold breach.

In the above code, if the total execution time of spec exceeds 10 ms then the scenario execution will fail. You can see the output with error details in the error console.

Similar to the above-mentioned extensions, there are a couple of other built-in extensions as well like:

@Requires: Which requires a specific condition to be true.

@Issue: To link any defects associated with the test case, etc.

These extensions add a lot of flexibility and power to Spock specifications and give in a lot of control for the test execution.

Thus, we have covered the most popular Spock Interview Questions here in this tutorial. The learning curve for Spock is low owing to the fact that the language groovy follows a declarative programming style and is highly readable.

Although relatively new, Spock is gaining popularity as a framework of choice for writing different kinds of tests in Java or Groovy-based applications.

Hope, you enjoyed all the informative tutorials in this Spock Series. We are indeed sure that these tutorials would have enriched your knowledge and understanding of Spock.