TDD, BDD & ATDD are the terms which have revolutionized the tester’s world in Agile and have gained momentum too. Change in the mindset of testers also requires learning new skills and more importantly, changing the attitude, and the way of working.

Unlike working in isolation, testers need to collaborate and work together with the programmers which means

Before I jump into the discussion of a tester’s involvement in these practices, let’s first try to understand the concepts behind these terms:

How can we test a piece of software which is yet to be developed?

TDD works in small increments where:

Let me try to explain it through a flowchart:

Yes!!  You guessed it right!! It’s the unit testing.

The test which is written first is not the test that the testers write, but it is the unit test which the programmers write. So, I would rephrase the steps as:

Now, the question that arises here is – if TDD is a programmer’s job, what is the tester’s role in this approach?

Well, having said that TDD is a programmer’s job, it does not mean that the testers are not involved in it. Testers can collaborate by sharing the test scenarios consisting of:

What I mean to say is – testers should participate in defining the unit test scenarios and collaborate with the programmers to implement the same. Testers should provide their feedback on the test results.

If we want to implement TDD, testers need to upgrade their skill sets. They need to be more technical and focus on improving their analytical and logical skills.

Testers should also put in an effort to understand the technical jargon that the programmers use, and if possible, must have a bird’s eye view of the code.  In a similar fashion, the programmers have to step into the tester’s shoes and try to come up with more sophisticated scenarios that will make the unit testing more robust and solid.

Both programmers and testers have to step into each other shoes, unlike the old traditional approach where the programmers did not give much weight to the unit tests because they relied on the testers for finding bugs and defects, and the testers did not want to indulge themselves into learning the technical stuff because they think their job ends after finding the defects.

BDD, as the name suggests, illustrates the methods of developing a feature based on its behavior. The behavior is basically explained in terms of examples in a very simple language which can be understood by everyone in the team who is responsible for the development.

Some of the key features of BDD are as follows:

Well, we know that fixing a defect/bug at the later stage of any development cycle is quite costly. Fixing of the production defects not only impacts the code but also the design and its requirements. When we do the RCA (Root Cause Analysis) of any defect, most of the time, we conclude that the defect actually boils down to miss-understood requirements.

BDD approach allows the development team to do so by:-

How to Implement BDD?

There are many tools available in the market for implementing BDD. I am naming a few here:

Let’s try to understand BDD with an example. For my case, I am using Gherkin (Cucumber):

Consider a simple case where we want to allow only authenticated users to enter into XYZ site.

The Gherkin file (feature file) would be as follows:

Given: Customer opens the registration portal

Then: the customer should be able to view the form.

We can see how a particular requirement is documented using simple English. The three amigos can work together to design the feature files and specific test data can be documented in the example section. BDD provides a medium to bring programmers, testers, and business to one table and establish a common understanding of the features to be implemented.

BDD approach saves effort & costs and checks if there are any defects post the production deployment as the collaboration of the customers and developers was throughout the development cycle of the feature.

Development teams can utilize these feature files and convert them into executable programs to test a particular feature.

Well, you need to learn Cucumber / Fitnesse for that!!

Acceptance Test Driven Development or ATDD is a technique where the entire team collaborates to define the acceptance criteria of an epic/story before the implementation actually begins. These acceptance tests are supported by proper examples and other necessary information.

Most of the time, BDD and ATDD are used interchangeably. The ATDD approach can also be implemented using the Given-When-Then format, just like how we write features in the BDD approach.

Let’s quickly try to summarize the differences between the 3 approaches:

All these techniques basically talk about the “test-First” approach, unlike the “test-last” approach used in traditional development methodologies.

As the tests are written first, testers do play a very important role. Not only do testers need to have a vast domain and business knowledge, but they also need to possess good technical skills so that they can add value in brainstorming during the 3 amigos discussions.

With the concepts like CI (Continuous Integration) and CD (Continuous Delivery), testers need to collaborate well with the programmers and contribute equally to the development & operations area.

Let me summarize this discussion with the famous Test Pyramid in Agile: 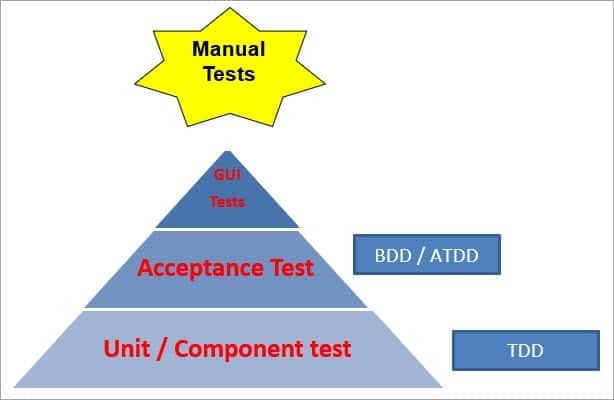 In the Agile world, an emphasis is laid on making this layer of the pyramid more strong and robust and it is emphasized that most of the testing is achieved at this layer.

Tools used in this layer of a pyramid are all the Xunit tools.

Tools used in the middle layer of the pyramid are – Fitnesse, Cucumber, and Robot Framework.

Tools used in the top layer are – Selenium, QTP, and RFT.

Since we work in small increments in Scrum (called Sprints), manual implementation of all these approaches is not feasible. These approaches require automated intervention. Automation, in this case, is very critical.

In fact, these approaches are actually executed through automation. At the end of every sprint, new features are being added, so it becomes important that the previously implemented feature work as expected; hence, Automation becomes the HERO here.

By the end of the article, you must have learned about How the Testers are Involved in TDD, BDD & ATDD Techniques.

In the third part of the series, I will focus my discussion on automation in an Agile world.

About the author: This article is by STH Author Shilpa. She is working in the software testing field for the past 10+ years in domains like Internet advertising, Investment Banking, and Telecom.

Keep watching this space for much more updates.

17 thoughts on “How the Testers are Involved in TDD, BDD & ATDD Techniques”