In this Complete Beginners Guide on Spock, a brief Introduction on Spock Framework and Groovy programming was given in our previous tutorial.

In this tutorial, we will walk through all the details/steps required to get started with Unit testing in Spock.

For the sake of simplicity, we are going to test a simple Calculator Application which has different methods like addition, subtraction, multiplication, division, etc., all of which accept integer parameters and return an integer output. 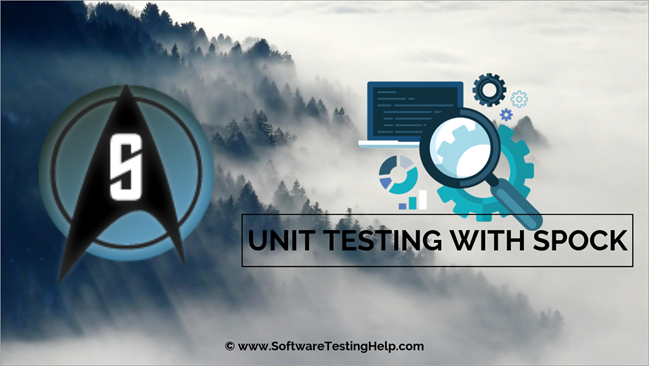 Similar to any other Unit testing frameworks, Spock too can be used to write scenarios/test cases for an application under test. We’ll try to compare and contrast the different features of the Spock framework with the existing/known frameworks like JUnit.

Let us first try to understand the Groovy’s “def” keyword in brief. The def keyword is used to define the type-def and can be used to declare a function as well as a field/variable.

“def” is generally used when we don’t want to restrict the type of a field or return type of a method. Let’s see some examples of def keyword in a groovy class and all its valid usages.

The Lifecycle of a Spock Specification

Spock spec when executed looks for all the tests defined and executes them one by one. However, there are few other functionalities/features that are provided by Spock to make tests less redundant and more readable.

Let’s discuss some features below:

Defining Inputs/Variables as a part of Spec

Consider having multiple tests all using the same input values. One way would be to initialize the input values in each test individually, else we can directly define the fields at spec level and ensure that before each test, the fields will be initialized and available to the test being executed.

Let’s see an Example for our calculator application class.

We will define the input data at the spec level so that it will be available with the initial values to all the tests present in the specification.

In this code sample, you can see, that we have defined input1, input2, the application under test and result at spec level. What this ensures is that every time a test is run from the spec files, and the initialized fields are passed to that test. This indeed eliminates the need for setting up tests every time with input values.

Similar to most of the unit testing frameworks, Spock also provides setup and cleanup methods for executing special logic/tasks at specific lifecycle events of test execution.

These methods are called once for each Spec execution and are called before and after the test execution respectively. These are comparable to @BeforeClass and @AfterClass annotations of JUnit.

These methods are called before and after the execution of each test in the spec.

These hooks are the right place for any logic/piece of code that you would like to execute before and after test execution. For Example, In cleanup, you can write a code to close the database connection (if any) that was used during the test.

These can be compared to @BeforeTest and @AfterTest annotations in the JUnit.

Let’s see an Example of these fixtures in our calculator application test.

If the above test fixture code is added to a spec containing 4 tests, then the output will be as below:

The assertions in Spock are called power assert (and it was adopted by groovy later after being introduced by Spock). The Spock assertions provide a lot of diagnostic exceptions in case of any assert failures.

One can easily find out what went wrong by simply looking at the failure diagnostic as opposed to verbose AssertionErrors in JUnit and other frameworks.

We will work with a simple test that check’s for string equality and see what diagnostics are generated in case of an assertion failure.

As you can infer from above, the diagnostic info provided by Spock has better detail and is more user-friendly when compared to the other frameworks like JUnit.

Asserting multiple elements at once – Spock provides various shorthand’s for assertions and one such is “*” notation which allows asserting the elements at the list.

Let’s understand this with an Example:

Consider a CityInfo class having cityName and population as the fields. We will write a Spock test to assert the names of cities that are there in the given list.

As shown in assertion shorthand above you could validate the entire list with the help of the “*” keyword.

Let’s also see how a failure would’ve looked like. I’ll remove the name of any one city from the assertion above.

You can see that the diagnostic information of assertion failure is rich and easy to comprehend.

Let’s see, how we can leverage closure parameter named every() to add an assertion for every element of a list or collection. In the same example, let’s try adding an assertion which validates the population of each city if the given input is > 50.

Exceptions can be asserted to be thrown in the “then” block (which means a when the block is also required). The exception detail can be diagnosed to by assigning the thrown exception to a field and asserting the required properties of the exception thrown.

Let’s use the same CityInfo class and define a method that throws an exception and write a test for it.

Let’s look at the test now:

In order to generate beautiful and detailed HTML based reports, there are libraries available which can be added in the build file and now whenever the tests get executed during the build (or by direct execution), a detailed html based report will get generated in the output folder.

In order to get the test reports generated, add the following libraries to the build.gradle file (and similarly for Maven pom.xml file as well).

Now build the project and execute the tests by running all the tests in the “test” folder or by executing “gradle clean test”. 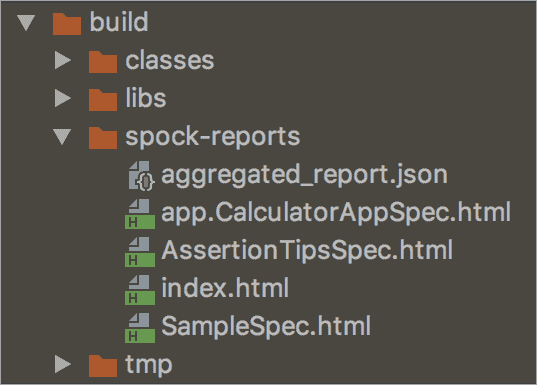 You can open index.html file to get a summarized report for all Spock specs that were available to be executed.

If you want to see the detailed report for a specific Spec, then click on the spec from the above list and you can see a detailed report of failures as well as successes. 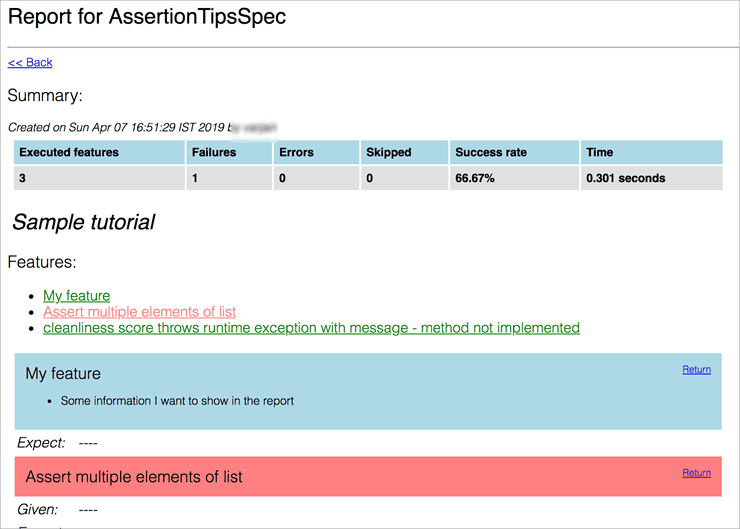 In this tutorial, we covered the basics of Unit testing with Spock Framework. We saw the different ways and shorthands for writing assertions and the kind of rich diagnostics info generated by the Spock framework for assertion failures.

We also looked at how we could generate quiet pretty HTML based reports for the Spock tests which include the same detailed diagnostics for the tests executed.

Our upcoming tutorial will brief you about writing parameterized tests with Spock in detail!!