This Tutorial Explains How to Write Your First Program – Hello World in Java. It includes Creation, Compilation, and Execution of the program:

In this tutorial, we will write and discuss the various components of the first program in Java, i.e. the universal program “Hello, World”.

Simple examples have been included in this tutorial for your easy understanding of the concept. 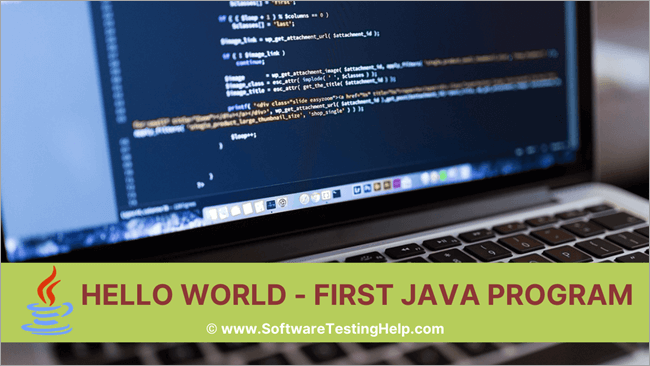 How To Begin Java Programming?

The basic steps to begin Java programming are as follows:

So far we have seen the Java tutorials related to Java download, installation, setting up IDE, etc., we have also discussed two popular Java IDEs i.e. Eclipse and IntelliJ IDEA. Next, we discussed the features introduced in Java 8 that was the most important release.

Now after following these tutorials, you have set the latest Java version on your machine along with all the required environment variables, and you have got Java working on your machine. Thus it’s now the time to start with actual Java programming and learn its various programming constructs i.e. in this tutorial we will learn steps 3 & 4 listed above.

Let us begin with the universal program that is always the first program irrespective of which programming language you are learning. The “Hello, World” program.

We will first learn how to develop a Java program in a step by step manner and then compile and execute it using the command prompt. We will also see how to run the same program in a Java IDE.

#2) Save the above file as “myfirstclass.java” in your code directory.

As the class “myfirstclass” is declared public, you will name the Java file with this class name. This is a Java convention.

#3) Open the command prompt and go to the directory where you just saved your Java file.

#4) Next type in the command “javac myfirstclass.java” in the command prompt. The following output is displayed. Note that there are no errors and the file is compiled successfully.

#5) Check the folder containing Java file. You will see that a class file “myfirstclass.class” is generated as a result of the compilation. Note that irrespective of what name you give to your Java source file, a class file contains the name of the actual class. 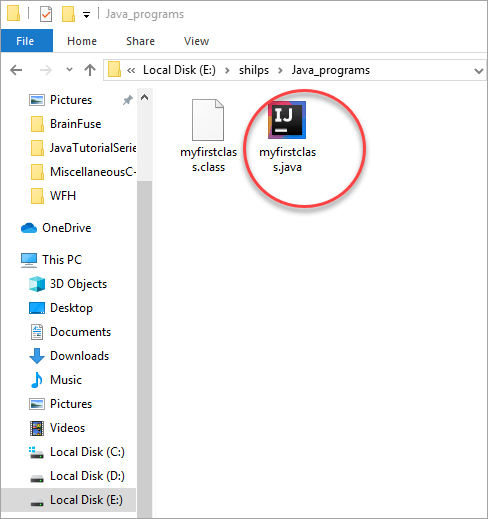 #6) If there is more than one class in the source Java file, then a class file is created for each file.

#7) Next, go back to the command prompt and type the command “java myfirstclass”. This will execute the class file and output displayed.

Alternatively, if you want to use IDE like Eclipse for creating Java programs, then you can create a project and add a class with the main function. You can give a print statement to print “Hello, World” and then run this project as a Java application as shown in the below image.

We have already developed and executed the “Hello, World” Java program successfully. Now let us analyze and understand each component of the program.

For your convenience, the contents of the program are posted below.

Let us understand the program by listing the main Java keywords that are used:

Q #1) What is Hello World in programming?

Answer: “Hello, World” is a simple program that displays the message “Hello, World”. This is a general computer program that demonstrates the basic syntax of the programming language being used. Developing this program is quite simple and is usually the first program written when a programmer learns to code.

Answer: Brian Kernighan, the author of the book “C Programming Language” first referenced the phrase “Hello, World” in his book and from then it has been used universally to illustrate the basic syntax or the first program in most of the programming languages.

Answer: A simple Java program is good to assess the programmer’s basic skills and also learn the basic syntax of the Java programming language.

You can start with a simple “Hello, World” program that demonstrates the use of class, static, public and void keywords, main function, command-line arguments, System.out.println, etc.

Answer: You can write Java code in simple a notepad or notepad++ text editor and then compile and execute it using the command prompt. Alternatively, there are a lot of Java IDEs like Eclipse, Net Beans, IntelliJ IDEA, etc. that have the Java environment ready to develop the simple program as well as bigger, complex projects.

The following are the basic steps to create a simple program in Java.

Answer: The main class of Java is the one that contains the “main” method. As per Java convention, at least one class should contain the main method that happens to be the entry point for the Java program.

Answer: Steps to say “Hello, World” in Java are given below:

In this tutorial, we developed the “Hello, World” program which was the first Java program. We also discussed all the parts of this program in detail.

In our next article, we will learn more about the terms and definitions in Java language along with the basic syntax and programming of the Java language.