This tutorial explains the concept of Comparable And Comparator Interfaces In Java with examples. You will also learn about the differences between the two:

We learned all about interfaces in our earlier tutorials. An interface is used to declare abstract methods and static or final variables. By default, interface methods are public. Since Java 8, interfaces can also have static and default methods defined in them. 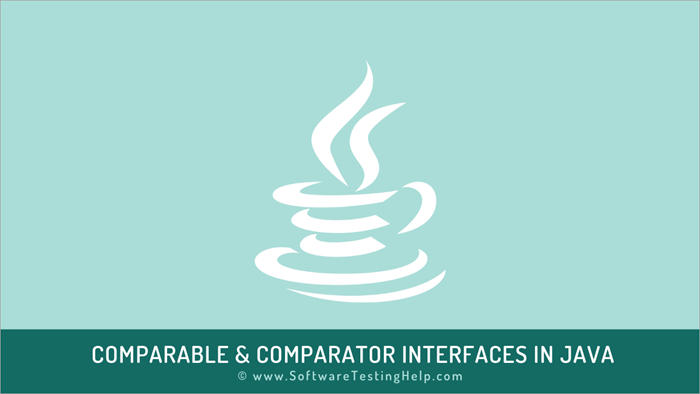 Let’s begin with a Comparable interface.

For example, if we have name and age as fields in our class then at a time we can either sort the class objects on name or age. We cannot sort simultaneously on both name and age.

The method ‘compareTo’ of the Comparable interface is used to compare the current object to the given object. The general syntax of the compareTo object is given below.

As shown above, the compareTo method accepts an object as an argument (it can be any custom object) and compares it with the current object used to invoke this method.

The compareTo method returns an integer value that can have one of the following values:

We can use the compareTo () method to sort:

Now let’s implement an example of a Comparable interface.

The following Java program implements a Person class that contains name and age as member fields. This class implements a ‘Comparable’ interface that will allow us to sort the object of class Person.

Note that as we are going to sort custom objects, we need to override the ‘compareTo ()’ method of the Comparable interface.

Inside the overridden compareTo () method, we compare the age of the person object that is passed with that of the current object and accordingly return the value.

An Example Java program is given below.

As seen from the output, we use a Comparable interface to compare two objects of the Person class based on the age member variable.

So as the name suggests, a Comparable interface allows us to compare one object with the other provided the objects are of the same type. As long as the objects know to arrange themselves, we can sort the objects easily using the sole method ‘compareTo ()’ that belongs to this interface.

We can also use the compareTo () method to compare two String type objects in Java. The two string objects are compared lexicographically by converting each character of the string object into its equivalent Unicode character. 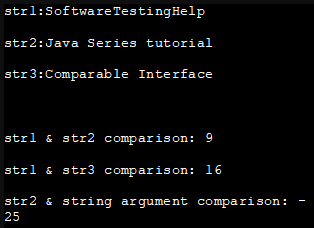 Now let’s move on to the Comparator interface in Java.

Then we can call the Collections.sort () method with these Comparators.

So how exactly can we write the Comparators?

Consider an example of a Class Student with name and age as its field. Consider that we want to sort Student objects on name and age fields.

For this purpose, we will have to first write Comparator classes, StudentAgeComparator, and StudenNameComparator. In these classes, we will override the compare ( ) method of the Comparator interface, and then we will call the Collections.sort method using each of these comparators to sort student objects.

The comparator interface contains a ‘compare’ object that is used to compare objects of two different classes. The general syntax of the compare method is:

The Comparator interface is a part of the java.util package and apart from the compare method; it also contains another method named equals.

Let’s implement a Comparator example in Java. Again we have taken a Student class with name and age as its data members. Then we define a comparator class AgeComparator that overrides the compare method to compare ages of two students and return appropriate values.

In the main method, we construct an Arraylist of Student objects. Then we call Collections.sort method with ArrayList and AgeComparator object as arguments. This sorts the Student objects according to age.

The Java program implementing this scenario is given below.

This way we can have as many Comparator classes as required to sort objects in various fields. The way in which we compared two int variables, we can also compare variables of the other data types using the Compare method.

Difference Between Comparable Vs Comparator

Q #1) Is comparable a functional interface?

Q #2) How do you make a class Comparable?

Answer: We make a class comparable by implementing the Comparable interface. Inside the class, we override the compareTo () method to sort the object. We pass an object and compare it with the current object.

Q #3) What is the main purpose of the Comparator interface?

Q #4) Why is Comparator used in Java?

Answer: Comparator interface is mainly used when we want a different sorting order for our custom objects other than natural ordering based on multiple fields.

Q #5) What implements the Comparable interface?

The comparable interface has a method ‘compareTo ()’ that needs to be overridden in the class implementing the Comparator interface and whose objects are to be sorted.