In this Java Vs Python Tutorial, you will Learn the Major Differences Between Java and Python Programming Languages and the Drawbacks of Both.

Though Java beats Python from the speed and concurrency point of view, there are also some areas like the size of code, simplicity, etc. in which Python takes the upper hand. 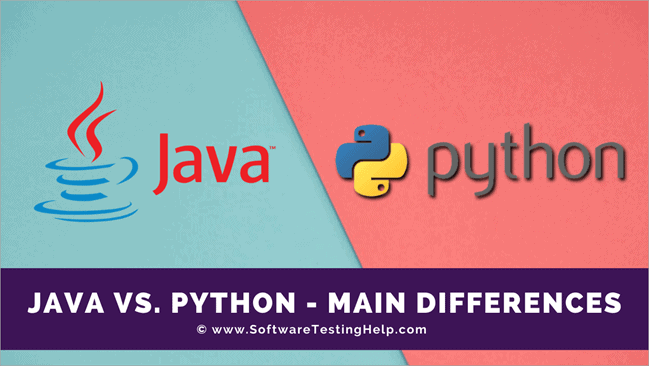 In this tutorial, we identify numerous factors based on which we can differentiate between Java vs Python and also answer some of the questions that will help the readers decide which language they prefer.

In the above code, the comparison shows the static typing of Java wherein you need to declare the variables of appropriate data type before using them.

On the contrary, in the Python program, you need not declare the type of the variables. You can directly carry out the operations and the type will be decided at run time as Python is a dynamically-typed language.

This is yet another comparison between Java and Python for syntax. From the program, you can note that each Java statement needs a semicolon to end it. Also, any function block should be enclosed in curly braces ({}).

If you miss any one of these, then you will get a syntax error. Also whether you indent or not doesn’t make any difference to Java. On the other hand, for Python, you need not use any opening/closing braces, semicolons, etc. You just provide two print statements as shown in the above program.

As for code readability, check the above program samples for Java and Python. To print a simple message “Hello, World” in Java, you need to start right from declaring a class, the main function and so on. So to print the message, you have got 6 lines of code.

On the contrary, check the Python program, its just one line. So as stated above, Java has a more verbose code.

Python Vs Java – Some More Differences

#1) Whitespace: Java ignores whitespaces and makes use of semicolons, curly brace to define statements, blocks, etc. Python uses whitespaces as a part of the syntax. Python also uses tabs and indentation to define its program syntax and formatting.

#2) File I/O: In Java, a simple task like reading a file consists of importing too many classes and writing a class to read the contents of the file. In Python, on the other hand, it’s just two lines that can read the file for you.

#3) Agility: Java has more refactoring support because of static typing and the universal IDEs it has. Java is more popular for mobile and web applications.

Python, on the other hand, is more in the talent field and is mostly popular in machine learning, IoT and AI fields.

#4) AI and Machine Learning Support: Python being syntactically easy and full-fledged general-purpose language is the most popular language in the field of machine and Artificial intelligence. Most of the AI and machine learning applications are developed in Python.

Java is also used in AI and machine learning fields but not as much as Python.

#5) Applications: Java finds most of its applications developed in mobile, web and finance fields. Python is mostly used in the field of IoT, machine learning and Artificial Intelligence.

Python, on the other hand, has fewer legacy problems. Thus, the organization finds it difficult for the script to copy and paste the code.

#7) Trends: The latest trends show that Java is still the most popular language in all fields. Python, however, has shown astronomical growth and is still marching ahead.

#8) Jobs & Salary: As far as Java and Python are concerned, there is no clear distinction between the two in terms of jobs and salary. While Java is holding its ground firmly as far as the demand for jobs goes, Python’s demand has gone up exponentially in recent years.

As long as you have decent expertise in any one of the languages, you get a decent hike in your salary. Java has been around for a long time and java developers have a good hold over industry especially the enterprise.

Having differentiated Java and Python on various points, let’s discuss some of the drawbacks of both the languages.

Q #1) Which is faster Python or Java?

Answer: As far as execution speed is concerned, Java is faster as it’s a compiled language. Also, Java has statically typed so all the data types, etc. are checked at compile time.

Python, on the other hand, is an interpreted language and the program is interpreted as one statement at a time.

Q #2) Why Python is preferred over Java for machine learning implementation?

Answer: Python has a simple syntax and is easy to use. Thus unlike Java, it is easy to learn especially for beginners. Python has its own set of libraries that can easily integrate with machine learning libraries.

Python is preferred by data scientists as the most favored language mainly because of its functionality that can implement machine learning algorithms and integrate with ML libraries.

Answer: No. You don’t need Java to use Python. Python has its own functionality and libraries to get what is needed.

Having said that, Python is still lacking in fields like parallel processing, embedded systems, etc. that makes it dependent on languages like Java, C/C++.

Q #4) Which is better for AI Java or Python?

Java is popular in mobile and web application development. Also for parallel programming and database applications, Java is the first choice for programmers. Python has weaker database connectivity and also does not support concurrent operations.

Thus based on this comparison, you can decide the language you are going to use depending on the project requirements.