Learn about Encapsulation in Java with examples, why we need it, associated getter and setter methods:

In this tutorial, we will discuss another OOP concept – “Encapsulation”. OOP has four pillars namely, abstraction, encapsulation, polymorphism, and inheritance.

While abstraction is used to expose only the relevant details to the end-user, encapsulation mainly deals with data security. In ensuring data security, encapsulation shields the data members from unwanted access by specifying access modifiers and also bundles the data into a single unit. 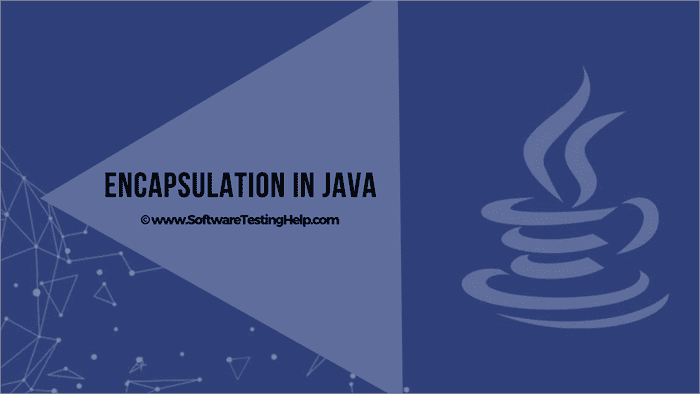 So how can we define Encapsulation in Java?

“Encapsulation in Java can be defined as a mechanism using which the data and the methods that work on that data is wrapped to form a single unit.”

What Is Encapsulation In Java

Using encapsulation we can also hide the class data members (variables) from the other classes. These data member variables can be accessed indirectly using methods of the class in which they are declared. The methods in turn are accessed using the object of that class.

So what we conclude from the above definition is that we have hidden the data member variables inside a class and have also specified the access modifiers so that they are not accessible to the other classes.

The above figure represents a class which is an encapsulation unit that bundles the data and methods operating on this data into a single unit.

Thus encapsulation acts as a protective shield around the data and prevents the data from unauthorized access by the outside world. In other words, it protects the sensitive data of our application.

In Java, there are two steps to implement encapsulation. Following are the steps:

Let’s now implement the example of encapsulation in Java.

In the above program, we declare a class which is the encapsulation unit. This class Student has bundled the data (Student_Id and name) and the methods to read and set values for these members into a single unit.

We provide getters (getId and getname) to read the values of these fields and setter methods (setId and setname) to set values for these methods. This is the only access they have and that also should be done using the Student class object.

To implement encapsulation in Java, we make the data member variables of the class as private. Now, these private variables are not accessible to anything outside the class including the class object.

This means if we have a class ABC as follows.

Let’s create an object of class ABC as follows:

So in the above code, accessing the private variable using the class object will result in a compiler error.

Getter and Setters are public methods that we can use to create, modify, delete, or simply view the values of the private variables.

The below program is an example of Getter and Setter methods.

The above program has a class Account and it has four private variables related to the account. As all the data members are private we have provided the getter and setter methods for each of these variables.

In the main method, we read and set values for these private variables using the public getter and setter methods accessed through the object of the class Account.

Frequently, we use encapsulation and data hiding interchangeably. But both are not the same. Java encapsulation deals with grouping of related data into a single unit to ensure better management and security of data.

Data hiding on the other hand restricts the data member access by hiding the implementation details. Although encapsulation is not exactly data hiding, it provides us the way of data hiding. Data hiding is achieved using access modifiers.

Encapsulation bundles the data in a single unit, so in a way, it hides the data. Also, it makes the data private and thus is inaccessible to the outside world. For making the data private, we use the access modifier private which is a data hiding concept.

At the same time, only the relevant details are provided to the end-user without exposing the implementation details which is a definition of abstraction. Thus we can view encapsulation as a combination of abstraction as well as data-hiding.

Why Do We Need Encapsulation

There are various reasons as to why encapsulation is essential in Java:

Q #1) Why Is Encapsulation used in Java?

Answer: Encapsulation in Java is mostly useful to hide the data. Or in other words, to decide about the access given to data as to who can access it, and who cannot.

Q #2) What is Encapsulation in OOP?

Answer: Encapsulation is one of the important pillars of Object-oriented programming language and it deals with the bundling of data and methods operating on that data into a single unit. For example, a class in Java is an encapsulated structure. Encapsulation also deals with decisions regarding providing access to data.

Q #3) What is the advantage of Encapsulation in Java?

Answer: The major advantage of encapsulation in Java is data hiding. Using encapsulation we can allow the programmer to decide on the access to data and methods operating on that data. For example, if we want a particular piece of data to be inaccessible to anyone outside the class, then we make that data private.

Q #4) What is the Encapsulation process?

Answer: Encapsulation is a process of picking up data from one format or protocol (in networking terms) and translating or reformatting it into another format or protocol so that the data is accessible across the applications or network and at the same time it is protected.

Q #5) What is the last step in data encapsulation?

Answer: The last step in encapsulation is changing the user information into equivalent data. Then this data is changed into segments that are further transformed into data packets. Data packets are placed into a logical frame that can be transferred to and fro in the software environment

Java achieves encapsulation implementation by making all the data members private and then providing getter and setter methods that are public so that we can read the values of the private variables and set new values for these variables.