This Java Introduction Video Tutorial Explains What is Java Programming Language, its Features and Various Application Types we can Develop using Java Language:

Java is a popular programming language developed by Sun Microsystems (later merged with Oracle) in 1991. Java was developed by James Gosling and Patrick Naughton.

In our day to day life from morning to evening, we are using many Java programmed applications and devices which include the smartphone in your hand to secure ATM backing transactions.

An explicit sequence of Java tutorials is compiled in this series to give you a better understanding of the concept of Java. 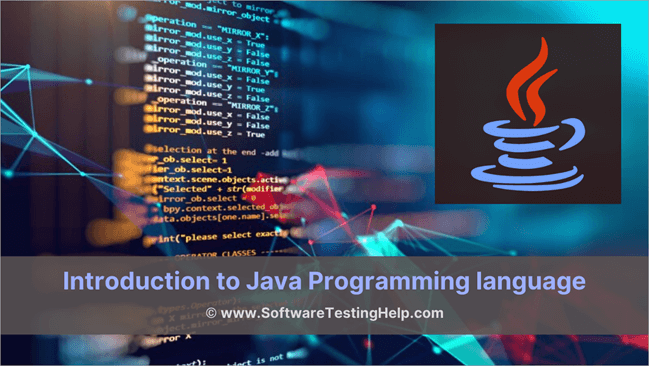 Check out the below video tutorial on:

Initially, it was named as “Oak” but was renamed subsequently in 1995 as “Java” since Oak was already a registered trademark.

The first edition of Java was known as “Java 1.0”. Over the years, Java language has evolved considerably and lots of features have been added to Java. As a result, lots of new versions have been released. The latest edition of Java is JDK (Java Development Kit) 13 or Java 13, which was released on September 10, 2019.

So, what is Java?

So, we can define Java as a

Any hardware component or a software environment in which a program runs is called a “platform”. Java has a Java Runtime Environment (JRE) running on it. Thus Java is also a platform.

We will learn more about Java as a platform in our subsequent tutorials.

Let’s discuss some of the distinguishing features of the Java programming language.

#1) Simple: Java syntax is quite simple and easy to understand. Java is also easy to learn. Most of the features of C++ that were either difficult to understand or ambiguous are simplified in Java and some are omitted.

For Example, pointers are absent in Java.

#2) Secure: A Java program runs in Java Runtime Environment (JRE) that makes it secure. The JRE does not have interaction with system OS, so java programs do not interfere with the system. Additionally, the Java language has security features that allow us to develop virus-free, secure applications. This is why many banking applications are built on Java.

#4) Portable: The Java program compiled into Byte code can be run on any platform. It is implementation-independent and everything required to run the code like storage, data types, etc. are predefined.

#6) Platform independent: Java is a “write once, run anywhere” code. Unlike other programming languages that compile into machine-specific code, Java is compiled into a byte code that can run on any machine independent of the operating system. Any machine that runs Java Runtime Environment (JRE) can run this byte code.

So we can distribute the Java program on various machines connected through the internet i.e. an object on one machine can execute remote procedures on another remote machine.

These are the major features of Java that make it a popular and most sought after programming language today.

Java programming language can be used to create the following types of applications.

These are also known as Windows-based or desktop applications. These are basically independent software that can install on the desktop.

Applications like media player, antivirus software, desktop editors, etc. are some of the applications that are standalone. Java features like AWT and Swing are typically used to develop these types of applications.

Enterprise applications are usually distributed applications and have features like high security, load balancing, and clustering.

Web applications run on the server-side and create dynamic web pages. These applications need to be highly dynamic and should be able to develop web pages on the go. Java features like JSP, servlets, struts, spring, hibernate, etc. are used for developing web applications.

From this, we see that Java allows us to develop a range of applications using its various features. This makes Java the most popular language that is still on top even after so many years since its development. As a programmer, we need not switch technologies to develop different kinds of applications. We can do almost everything using Java. 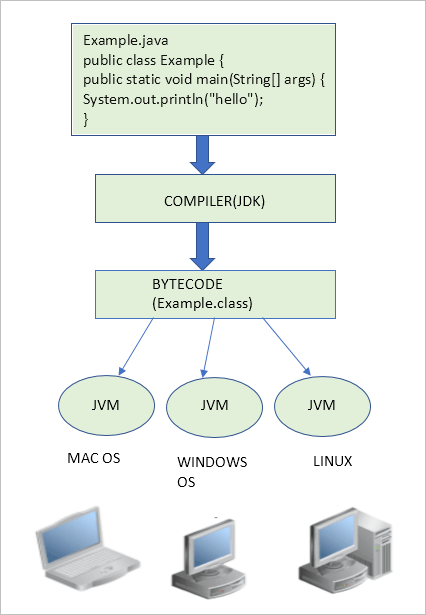 Java IDE is a software that helps the users to write and debug the program easily. It can highlight syntax and errors. One of the famous IDE is Eclipse. Download Eclipse from this link.

This tutorial outlined the very basic information on Java language from its history of development to its various features and types of applications that we can develop using this language.

Java language is easy to learn and has a very simple syntax. Any novice programmer can learn the java basics but the learning becomes easier if a programmer has prior knowledge of C and C++ languages. This is because Java derives its format from C and takes its OOP features from C++.

Hence, programmers learning Java will find most of the concepts similar to these two languages although Java has removed the complex concepts/features from C++, a notable feature of C++ pointers are absent in Java.

Having discussed the introductory information regarding Java language, in our subsequent tutorials, we will start learning the Java programming language in a step by step manner.