A graph data structure mainly represents a network connecting various points. These points are termed as vertices and the links connecting these vertices are called ‘Edges’. So a graph g is defined as a set of vertices V and edges E that connect these vertices. 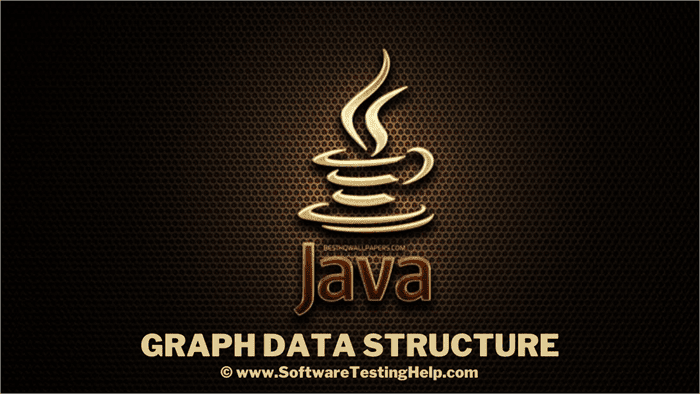 Apart from the undirected graph shown above, there are several variants of the graph in Java.

Let’s discuss these variants in detail.

The following are some of the variants of the graph.

A directed graph or digraph is a graph data structure in which the edges have a specific direction. They originate from one vertex and culminate into another vertex.

The following diagram shows the example of directed graph.

A directed graph is cyclic if there is at least one path that has its first and last vertex as same. In the above diagram, a path A->B->C->D->E->A forms a directed cycle or cyclic graph.

Conversely, a directed acyclic graph is a graph in which there is no directed cycle i.e. there is no path that forms a cycle.

In a weighted graph, a weight is associated with each edge of the graph. The weight normally indicates the distance between the two vertices. The following diagram shows the weighted graph. As no directions are shown this is the undirected graph.

Note that a weighted graph can be directed or undirected.

How To Create A Graph?

Java does not provide a full-fledged implementation of the graph data structure. However, we can represent the graph programmatically using Collections in Java. We can also implement a graph using dynamic arrays like vectors.

Usually, we implement graphs in Java using HashMap collection. HashMap elements are in the form of key-value pairs. We can represent the graph adjacency list in a HashMap.

Graph representation means the approach or technique using which graph data is stored in the computer’s memory.

We have two main representations of graphs as shown below.

If V is a set of vertices of the graph then intersection Mij in the adjacency list = 1 means there is an edge existing between vertices i and j.

To better understand this concept clearly, let us prepare an adjacency Matrix for an undirected graph.

In case the graph is directed, the intersection Mij will be set to 1 only if there is a clear edge directed from Vi to Vj.

This is shown in the following illustration.

As we can see from the above diagram, there is an edge from A to B. So intersection AB is set to 1 but intersection BA is set to 0. This is because there is no edge directed from B to A.

Consider vertices E and D. We see that there are edges from E to D as well as D to E. Hence we have set both these intersections to 1 in adjacency Matrix.

Now we move on to weighted graphs. As we know for the weighted graph, an integer also known as weight is associated with each edge. We represent this weight in the adjacency Matrix for the edge that exists. This weight is specified whenever there is an edge from one vertex to another instead of ‘1’.

This representation is shown below.

The presence of an edge between two vertices is denoted by a pointer from the first vertex to the second. This adjacency list is maintained for each vertex in the graph.

When we have traversed all the adjacent nodes for a particular node, we store NULL in the next pointer field of the last node of the adjacency list.

Now let’s prepare an adjacency list for the directed graph.

As seen from the above figure, in the directed graph the total length of the adjacency lists of the graph is equal to the number of edges in the graph. In the above graph, there are 9 edges and sum of the lengths of adjacency lists for this graph = 9.

Now let us consider the following weighted directed graph. Note that each edge of the weighted graph has a weight associated with it. So when we represent this graph with the adjacency list, we have to add a new field to each list node that will denote the weight of the edge.

The adjacency list for the weighted graph is shown below.

The following program shows the implementation of a graph in Java. Here we have used the adjacency list to represent the graph. 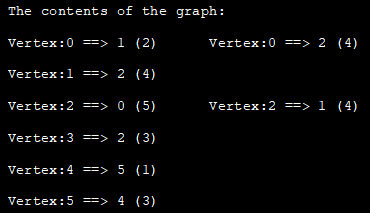 There are two algorithms supported to traverse the graph in Java.

Depth-first search (DFS) is a technique that is used to traverse a tree or a graph. DFS technique starts with a root node and then traverses the adjacent nodes of the root node by going deeper into the graph. In the DFS technique, the nodes are traversed depth-wise until there are no more children to explore.

Once we reach the leaf node (no more child nodes), the DFS backtracks and starts with other nodes and carries out traversal in a similar manner. DFS technique uses a stack data structure to store the nodes that are being traversed.

Following is the algorithm for the DFS technique.

Step 1: Start with the root node and insert it into the stack

Step 2: Pop the item from the stack and insert into the ‘visited’ list

Step 3: For node marked as ‘visited’ (or in visited list), add the adjacent nodes of this node that are not yet marked visited, to the stack.

Step 4: Repeat steps 2 and 3 until the stack is empty.

Now we will illustrate the DFS technique using a proper example of a graph.

Given below is an example graph. We maintain stack to store explored nodes and a list to store visited nodes.

We will start with A to begin with, mark it as visited, and add it to the visited list. Then we will consider all the adjacent nodes of A and push these nodes onto the stack as shown below.

Next, we pop a node from the stack i.e. B and mark it as visited. We then add it to the ‘visited’ list. This is represented below.

Now we consider the adjacent nodes of B which are A and C. Out of this A is already visited. So we ignore it. Next, we pop C from the stack. Mark C as visited. The adjacent node of C i.e. E is added to the stack.

Next, we pop the next node E from the stack and mark it as visited. Node E’s adjacent node is C that is already visited. So we ignore it.

Now only node D remains in the stack. So we mark it as visited. Its adjacent node is A which is already visited. So we do not add it to the stack.

At this point the stack is empty. This means we have completed the depth-first traversal for the given graph.

The visited list gives the final sequence of traversal using the depth-first technique. The final DFS sequence for the above graph is A->B->C->E->D.

#2) Pathfinding: As we have already seen in the DFS illustration, given any two vertices we can find the path between these two vertices.

Given below is an algorithm for the breadth-first traversal technique.

Let’s see the algorithm for the BFS technique.

Given a graph G for which we need to perform the BFS technique.

Let us illustrate the BFS technique using an example graph shown below. Note that we have maintained a list named ‘Visited’ and a queue. We use the same graph that we used in the DFS example for clarity purposes.

First, we start with root i.e. node A and add it to the visited list. All the adjacent nodes of the node A i.e. B, C, and D are added to the queue.

Next, we remove node C from the queue and mark it as visited. We add C to the visited list and its adjacent node E is added to the queue.

Next, we delete D from the queue and mark it as visited. Node D’s adjacent node A is already visited, so we ignore it.

So now only node E is in the queue. We mark it as visited and add it to the visited list. The adjacent node of E is C which is already visited. So ignore it.

At this point, the queue is empty and the visited list has the sequence we obtained as a result of BFS traversal. The sequence is, A->B->C->D->E.

The following Java program shows the implementation of the BFS technique.

#2) Broadcasting in networks: Broadcasting of packets from one point to another in a network is done using the BFS technique.

#3) GPS navigation: We can use the BFS technique to find adjacent nodes while navigating using GPS.

Given below is a brief introduction to some of the graph libraries in Java.

#4) SourceForge JUNG: JUNG stands for “Java Universal Network/Graph” and is a Java framework. JUNG provides an extensible language for analysis, visualization, and modeling of the data that we want to be represented as a graph.

Answer: Different types of graphs are listed below.

Apart from these main types we also have other types like pictograph, histogram, area graph, scatter plot, etc.

Q #4) What are the applications of the graph?

Answer: Graphs are used in a variety of applications. The graph can be used to represent a complex network. Graphs are also used in social networking applications to denote the network of people as well as for applications like finding adjacent people or connections.

Graphs are used to denote the flow of computation in computer science.

Answer: There are three ways to store a graph in memory:

#1) We can store Nodes or vertices as objects and edges as pointers.

#3) The last approach to storing a graph is by using an adjacency list of edges between graph vertices or nodes. Each node or vertex has its adjacency list.

In this tutorial, we have discussed graphs in Java in detail. We explored the various types of graphs, graph implementation, and traversal techniques. Graphs can be put to use in finding the shortest path between nodes.

In our upcoming tutorials, we will continue to explore graphs by discussing a few ways of finding the shortest path.