In a multithreading environment where multiple threads are involved, there are bound to be clashes when more than one thread tries to get the same resource at the same time. These clashes result in “race condition” and thus the program produces unexpected results.

For example, a single file is being updated by two threads. If one thread T1 is in the process of updating this file say some variable. Now while this update by T1 is still in progress, let’s say the second thread T2 also updates the same variable. This way the variable will give wrong results. 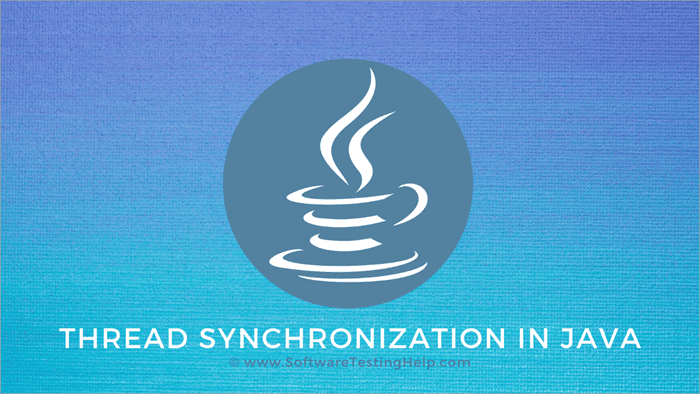 This is done in Java using “Thread Synchronization”.

As Java is a multi_threaded language, thread synchronization has a lot of importance in Java as multiple threads execute in parallel in an application.

We use keywords “synchronized” and “volatile” to achieve Synchronization in Java

We need synchronization when the shared object or resource is mutable. If the resource is immutable, then the threads will only read the resource either concurrently or individually.

Most of the time, concurrent access to shared resources in Java may introduce errors like “Memory inconsistency” and “thread interference”. To avoid these errors we need to go for synchronization of shared resources so that the access to these resources is mutually exclusive.

We use a concept called Monitors to implement synchronization. A monitor can be accessed by only one thread at a time. When a thread gets the lock, then, we can say the thread has entered the monitor.

When a monitor is being accessed by a particular thread, the monitor is locked and all the other threads trying to enter the monitor are suspended until the accessing thread finishes and releases the lock.

In a multithreaded environment, when more than one thread tries to access a shared resource for writing simultaneously, then multiple threads race each other to finish accessing the resource. This gives rise to ‘race condition’.

Race conditions occur due to a lack of proper synchronization of threads in the program. When we properly synchronize the threads such that at a time only one thread will access the resource, and the race condition ceases to exist.

So how do we detect the Race Condition?

The best way to detect race condition is by code review. As a programmer, we should review the code thoroughly to check for potential race conditions that might occur.

We have already mentioned that we use monitors or locks to implement synchronization. The monitor or lock is an internal entity and is associated with every object. So whenever a thread needs to access the object, it has to first acquire the lock or monitor of its object, work on the object and then release the lock.

Locks in Java will look as shown below:

As shown above, we have a lock () method that locks the instance. All the threads calling the lock () method will be blocked until the unblock () method sets are locked flag to false and notifies all the waiting threads.

Some pointers to remember about locks:

We already discussed that in a multithreaded environment, race conditions may occur when more than one thread tries to access the shared resources simultaneously and the race conditions result in unexpected output.

The simplest type of synchronizer is the “mutex”. Mutex ensures that at any given instance, only one thread can execute the critical section.

There are several ways in which we can implement a mutex in Java.

We can write the concurrent parts (parts that execute concurrently) for an application using the Synchronized keyword. We also get rid of the race conditions by making a block of code or a method Synchronized.

When we mark a block or method synchronized, we protect the shared resources inside these entities from simultaneous access and thereby corruption.

There are 2 types of synchronization as explained below:

In Thread Synchronization, more than one thread is trying to access a shared space. The threads are synchronized in such a manner that the shared space is accessed only by one thread at a time.

In Java, we can use the synchronized keyword with:

The above types are the mutually exclusive types of thread synchronization. Mutual exclusion keeps the threads accessing shared data from interfering with each other.

Before we go ahead with the synchronization of blocks and methods, let’s implement a Java program to demonstrate the behavior of threads when there is no synchronization.

The following Java program has multiple threads that are not synchronized. 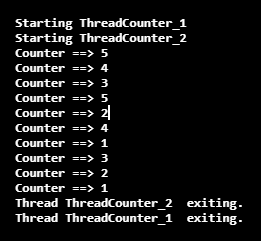 For example, we have a method with say 75 lines of code. Out of this only 10 lines of code are required to be executed by one thread at a time. In this case, if we make the entire method as synchronized, then it will be a burden on the system. In such situations, we go for synchronized blocks.

The general syntax of a synchronized block is as shown below:

Here “lock_object” is an object reference expression on which the lock is to be obtained. So whenever a thread wants to access the synchronized statements inside the block for execution, then it has to acquire the lock on the ‘lock_object’ monitor.

As already discussed, the synchronized keyword ensures that only one thread can acquire a lock at a time and all the other threads have to wait till the thread holding the lock finishes and releases the lock.

Now we will present the above example that was already implemented with slight changes. In the earlier program, we did not synchronize the code. Now we will use the synchronized block and compare the output.

In the Java program below, we use a synchronized block. In the run method, we synchronize the code of lines that print the counter for each thread. 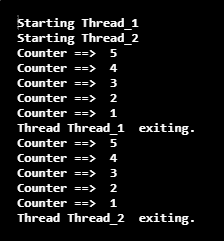 When a method is made synchronized, then only one thread will be able to make a method call at a time.

The general syntax for writing a synchronized method is:

For the synchronized method, the lock object may be one of the following:

The Synchronized Method is demonstrated using the below example. 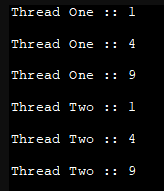 Another example is given below.

To summarize, the Java synchronized keyword performs the following functions:

When a variable is declared volatile, its value is never cached but is always read from the main memory. A volatile variable guarantees ordering and visibility. Although a variable can be declared as volatile, we cannot declare classes or methods as volatile.

Consider the following block of code:

In the above code, the variable myvar is static and volatile. A static variable is shared among all the class objects. The volatile variable always resides in the main memory and is never cached.

Hence there will be only one copy of myvar in the main memory and all read/write actions will be done on this variable from the main memory. If myvar was not declared as volatile, then each thread object would have a different copy that would result in inconsistencies.

Some of the differences between Volatile and Synchronized keywords are listed below.

However, sometimes a situation occurs in which threads can no longer function simultaneously. Instead, they wait endlessly. This occurs when one thread waits on a resource and that resource is blocked by the second thread.

The second thread, on the other hand, is waiting on the resource that is blocked by the first thread. Such a situation gives rise to “deadlock” in Java.

Deadlock in Java is depicted using the below image.

Thus none of the threads can finish their execution unless they get hold of the pending resources. This situation has resulted in the deadlock where both the threads are waiting endlessly for the resources.

Given below is an example of Deadlocks in Java.

In the above program, we have two shared resources and two threads. Both threads try to access the shared resources one by one. The output shows both the threads locking one resource each while waiting for the others. Thereby creating a deadlock situation.

Although we cannot stop deadlock situations from occurring completely, we can certainly avoid them by taking some steps.

Enlisted below are the means using which we can avoid deadlocks in Java.

Having nested locks is the most important reason for having deadlocks. Nested locks are the locks that are given to multiple threads. Thus we should avoid giving locks to more than one thread.

We should use Thread.join with maximum time so that the threads can use the maximum time for execution. This will prevent deadlock that mostly occurs as one thread continuously waits for others.

We should lock only the necessary code. Having unnecessary locks for the code can lead to deadlocks in the program. As deadlocks can break the code and hinder the flow of the program we should be inclined to avoid deadlocks in our programs.

Q #1) What is Synchronization and why is it important?

Thus we should ensure that in a multi-threaded environment, the threads are synchronized so that the way in which they access the shared resources is mutually exclusive and consistent.

Answer: Synchronization means a construct is a thread-safe. This means multiple threads cannot access the construct (code block, method, etc.) at once.

Non-Synchronized constructs are not thread-safe. Multiple threads can access the non-synchronized methods or blocks at any time. A popular non- synchronized class in Java is StringBuilder.

Q #3) Why is Synchronization required?

Answer: When processes need to execute concurrently, we need synchronization. This is because we need resources that may be shared among many processes.

In order to avoid clashes between processes or threads for accessing shared resources, we need to synchronize these resources so that all the threads get access to resources and the application also runs smoothly.

Q #4) How do you get a Synchronized ArrayList?

In this tutorial, we have discussed the Synchronization of threads in detail. Along with it, we also learned about the volatile keyword and deadlocks in Java. Synchronization consists of Process and Thread synchronization.