We use graphical user interfaces (commonly called GUI) to build applications that have a visual interface by making it easy for the user to use the application.

Having a visual interface for an application makes the application easy to navigate, use controls more efficiently, and also it is visually appealing to the user.

Swing is mainly used for creating the GUI for applications. 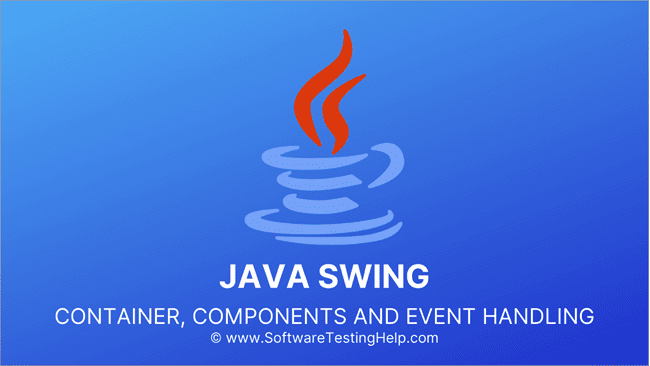 What Is Java Swing

Java provides many GUI frameworks that help us in developing a variety of GUI applications. We have seen one in our previous tutorial i.e. Abstract Window Toolkit or AWT. AWT is one of the oldest GUI frameworks in Java and is also platform dependent. Another disadvantage of AWT is its heavyweight components.

The Swing framework in Java is built on top of the AWT framework and can be used to create GUI applications just like AWT. But unlike AWT, the Swing components are light-weight and are platform-independent.

In general, the Swing API has every control defined in javax.swing package that is present in AWT. So swing in a way acts as a replacement of AWT. Also, Swing has various advanced component tabbed panes. Swing API in Java adapts MVC (Model View Controller) Architecture.

The main characteristics of this architecture are:

The features of the swing API are summarized below.

Swing has a big set of components that we can include in our programs and avail the rich functionalities using which we can develop highly customized and efficient GUI applications.

So what is a component?

A component can be defined as a control that can be represented visually and is usually independent. It has got a specific functionality and is represented as an individual class in Swing API.

For example, class JButton in swing API is a button component and provides the functionality of a button.

One or more components form a group and this group can be placed in a “Container”. A container provides a space in which we can display components and also manage their spacing, layout, etc.

In Java, Containers are divided into two types as shown below: 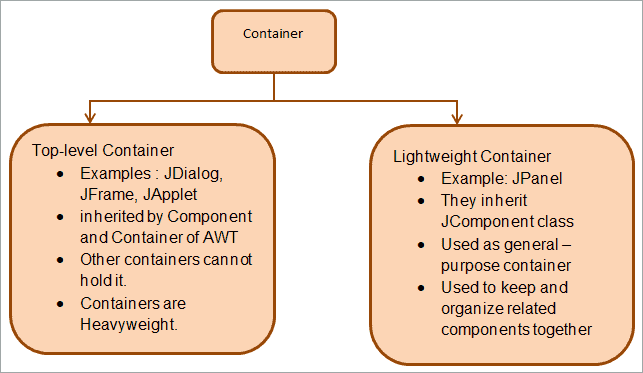 A Swing API hierarchy in Java is shown below: 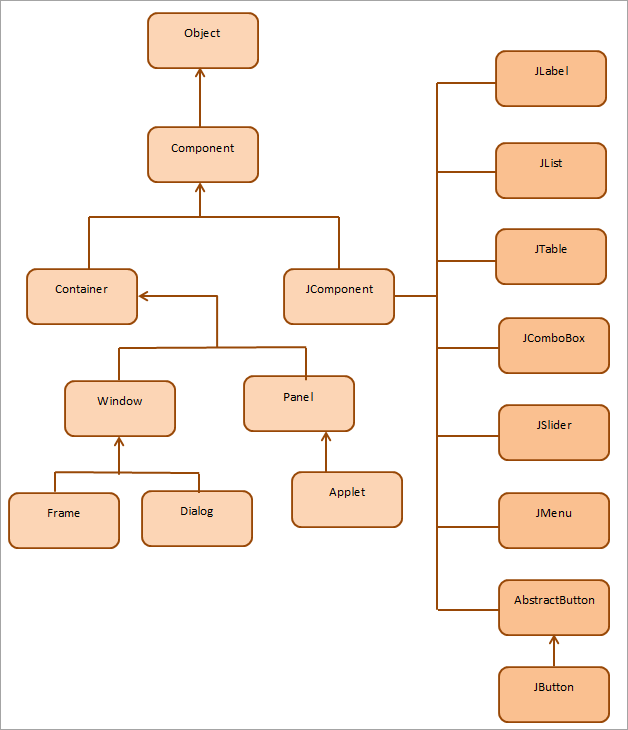 As seen from the above hierarchy we have Container classes – frame, dialog, Panel, Applet, etc. There are also Component classes derived from the JComponent class of Swing API. Some of the classes that inherit from JComponent are JLabel, JList, JTextBox, etc.

Some of the important classes of Swing API are as follows:

The Frame in Java Swing is defined in class javax.swing.JFrame. JFrame class inherits the java.awt.Frame class. JFrame is like the main window of the GUI application using swing.

We can create a JFrame window object using two approaches:

#1) By Extending The JFrame Class

The first approach is creating a new class to construct a Frame. This class inherits from the JFrame class of the javax.swing package.

The following program implements this approach.

#2) By Instantiating The JFrame Class

The swing API class that implements the panel component is JPanel. JPanel class inherits from JComponent and has FlowLayout as its default layout.

The following program demonstrates the creation of a panel container in a frame using javax.swing package classes.

Here we have a Frame. Inside the frame, we create a panel. Then inside the panel, we create a button. This way we can use a panel to hold the other components.

TextArea defines an editable text field. It can have multiple lines. The swing class that defines the text area is JTextArea and it inherits the JTextComponent class.

JTextArea class contains 4 constructors that allow us to create a text area with various options.

The following Java program shows an example of the JTextArea component in the swing.

A button is a component that is used to create a push button with a name or label on it. In swing, the class that creates a labeled button is JButton. JButton inherits the AbstractButton class. We can associate the ActionListener event to the button to make it take some action when it is pushed.

Let’s implement an example program for JButton in Java swings.

A list consists of multiple text items. Users can either select a single item or multiple items at a time. The class that implements the list in swing API is JList. JList is a descendent of the JComponent class.

Given below are the constructors of the JList class.

A simple demonstration of the JList component is given below. 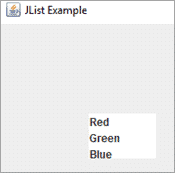 In the above program, we first define a listModel with color entries in it. Then we create a JList object and add the listModel to it. Next, the JList object is added to the frame object which is then displayed.

The JCombobox class shows a list of choices from which a user can select an option. The selected choice is at the top. JComboBox derives from the JComponent class.

The following are the constructors provided by JComboBox class:

The following example demonstrates the JComboBox implementation in Java. 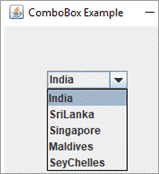 A slider allows us to select a specific range of values. In Java Swing API, JSlider is the class that is used to implement the slider.

The following are the constructors provided by JSlider class.

An event can be defined as a change of state of an object. From the GUI point of view, an event occurs when the end-user interacts with the GUI components. The events that get triggered in the GUI can be the click of a button, scrolling, selecting list items, changing text, etc.

Event occurring in the GUI listed above are mostly foreground events. We can also have some background events like background operation completion, timer expiration, etc.

The Delegation event model consists of:

#1) Source: The Source of the event is the object. The object on which an event occurs is the source and the source is responsible for sending information about the event to the event handler.

The requirement is to register the listener with the object so that when an event occurs, the listener can process it.

For example, for a button click event, we can have the following sequence of steps.

Now let’s discuss some of the listeners provided by Java.

The java.awt.an event package defines the ActionListener interface. This interface has only one method actionPerformed ().

When a registered component like a Button is clicked, then the actionPerformed () method is automatically invoked.

The steps to implement ActionListener class are as follows:

#2) Register the component with this listener. If the button is a component that we want to register with the listener then we will register it as follows:

So using the above steps, we can associate any event with the GUI component. 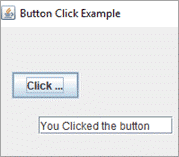 Whenever there is a change in the state of the key, a KeyListener is notified. Just like ActionListener, the KeyListener is also found in the java.awt.event package.

We need to implement the above methods to associate the key events with the component. We leave it to the user to implement a KeyListener example using swings in Java.

As long as there are fewer components, they can be placed by drag-drop manually. But it becomes difficult to arrange the components large in numbers. At this juncture, the Layout Manager of Java comes to our aid.

In this tutorial, we will only discuss FlowLayout and GridLayout.

The FlowLayout arranges the components in a flow direction, one after another. This is the default layout for the containers like Panel and Applet.

The FlowLayout class in Java that represents the FlowLayout manager contains the following Fields and constructors.

The above fields define the positions at which the components will be placed or aligned.

Given below is an example of FlowLayout in Java.

Using GridLayout we can layout the components in a rectangular grid fashion i.e. each component is arranged in each rectangle.

The following example implements the GridLayout in Java. 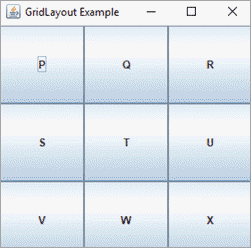 If we check the programming examples in this tutorial before the layout topic, we can see that we have set the layout as null in these examples (setLayout(null)). We have seen that when we use layout managers in our program, they automatically position the components.

When layout managers are not used, we can use the setBounds method to the size and position of the component. So the method setBounds is used to manually position the component and also set the size.

The general syntax of the setBounds method is as follows:

Let’s now implement an example of the SetBounds method.

In the above program, we have a Button component. We have not set any layout but we have used the setBounds method to set its position and dimensions.

Answer: Swing in Java is written on top of the AWT framework. So the event handling of AWT is inherited by swing completely. Swing also provides a large number of components that we can use to develop efficient GUI applications.

Answer: Swing API has loose MVC support. The model represents the data of the component. The swing component has a separate element called Model whereas Controller and View are clubbed together in UI elements. This clubbing allows the swing to have a pluggable look and feel.

Q #4) Is JavaFX better than Swing?

Answer: Swing is built on top of AWT and provides a rich and large set of UI components when compared to AWT. Swing components also can have their look and feel as against AWT components that take a look and feel of the Operating system.

When you create an application, initially you should have a base container and you have to add the required components like buttons and text fields in the container.

And when you click or perform any operation on any field, the event will occur and your code should listen to the events and also handle the event.

A container is a root element for an Application. All the other components are added to that root and it forms a hierarchy.

There are three container classes: 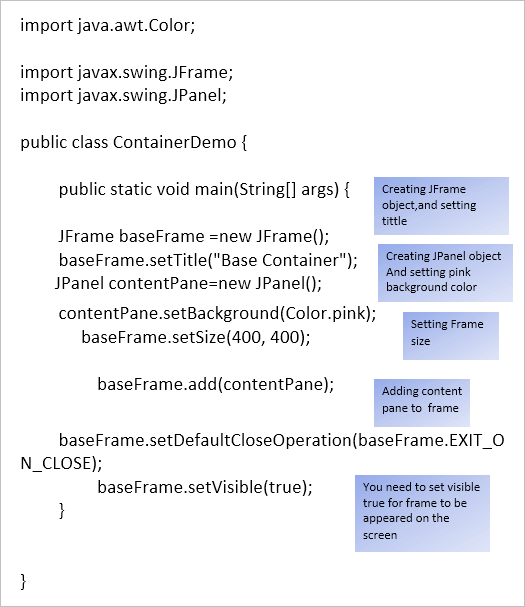 When you run the above program, you will get the below output. 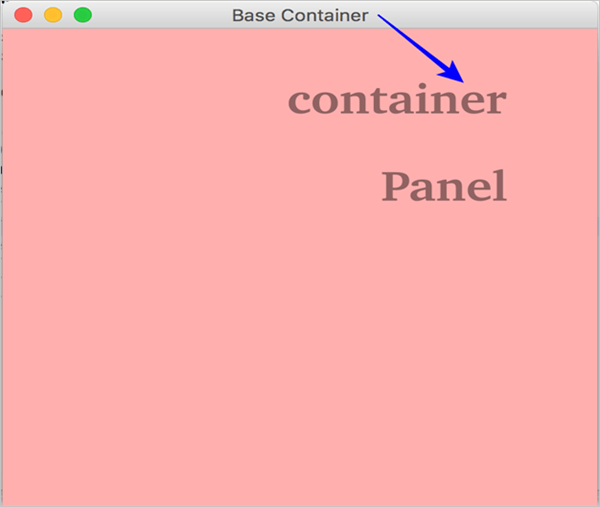 JComponent class is a base class for all the components in a swing.

The frequently used components include,

All these components should be added to the container if not, it will not appear on the application.

To create the button instance,

To add the button to the container,

All the Applications are driven by events like button clicks, mouse clicks, user text input etc. When the event occurs, you have to add a listener and must pass the source event object.

With an inner class, you can handle the event with your logic as shown below. 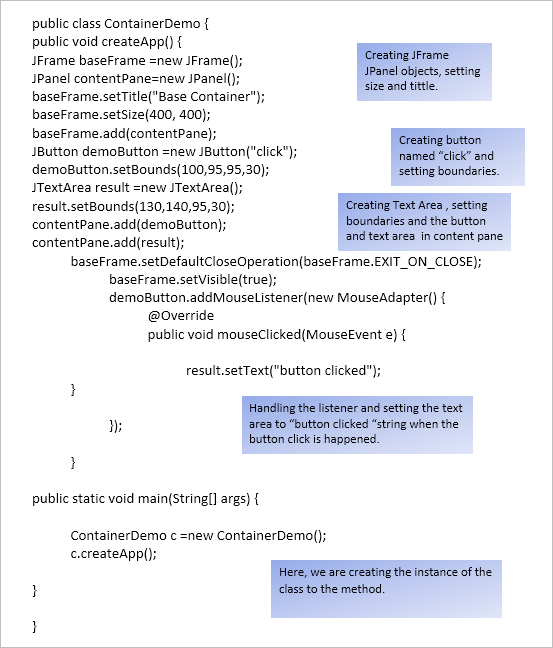 In this tutorial, we have touched base with the Swing API provided by Java for building GUI applications. We have discussed the major swing containers and components and their implementation.

We have also discussed event handling in Swing. Although the event handling mechanism is of AWT, swing implements the events in an efficient manner. Then we discussed the various layout managers provided by Swing API that allow us to layout or arrange various components in the Swing GUI applications.