In Java, we have classes and objects. These classes and objects are contained in a package. Besides, classes can have nested classes, methods, variables, etc. As Java is an object-oriented programming language, we have to follow the encapsulation wherein we hide the unwanted details.

Java provides entities called “Access Modifiers or access specifiers” that help us to restrict the scope or visibility of a package, class, constructor, methods, variables, or other data members. These access modifiers are also called “Visibility Specifiers”.

By using the access specifiers, a particular class method or variable can be restricted to access or hidden from the other classes. 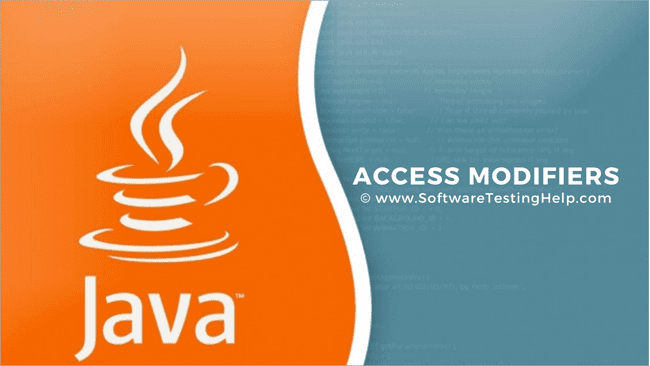 Modifiers in Java are of two types:

Access modifiers in Java allow us to set the scope or accessibility or visibility of a data member be it a field, constructor, class, or method.

Some of the non-access specifiers/modifiers in Java are:

We have covered static, synchronized, and volatile keywords in our earlier tutorials. We will cover the other non-access modifiers in our future tutorials as they are beyond the scope of this tutorial.

Java provides four types of access specifiers that we can use with classes and other entities.

#1) Default: Whenever a specific access level is not specified, then it is assumed to be ‘default’. The scope of the default level is within the package.

#3) Protected: The protected access level has a scope that is within the package. A protected entity is also accessible outside the package through inherited class or child class.

#4) Private: When an entity is private, then this entity cannot be accessed outside the class. A private entity can only be accessible from within the class.

We can summarize the access modifiers in the following table.

Next, we will discuss each of these access specifiers in detail.

The below program demonstrates the Default Access Modifier in Java.

In the above program, we have a class and a method inside it without any access modifier. Hence both the class and method display has default access. Then we see that in the method, we can directly create an object of the class and call the method.

A class or a method or a data field specified as ‘public’ is accessible from any class or package in the Java program. The public entity is accessible within the package as well as outside the package. In general, public access modifier is a modifier that does not restrict the entity at all.

The protected access specifier allows access to entities through subclasses of the class in which the entity is declared. It doesn’t matter whether the class is in the same package or different package, but as long as the class that is trying to access a protected entity is a subclass of this class, the entity is accessible.

Note that a class and an interface cannot be protected i.e. we cannot apply protected modifiers to classes and interfaces.

The protected access modifier is usually used in parent-child relationships.

The below program demonstrates the usage of the Protected Access modifier in Java.

The ‘private’ access modifier is the one that has the lowest accessibility level. The methods and fields that are declared as private are not accessible outside the class. They are accessible only within the class which has these private entities as its members.

Note that the private entities are not even visible to the subclasses of the class. A private access modifier ensures encapsulation in Java.

Some points to be noted regarding the Private Access Modifier.

The below Java program uses a Private Access Modifier.

The program above gives compilation error as we are trying to access private data members using the class object.

But there is a method to access private member variables. This method is using getters and setters in Java. So we provide a public get method in the same class in which private variable is declared so that getter can read the value of the private variable.

Similarly, we provide a public setter method that allows us to set a value for the private variable.

The following Java program demonstrates the use of getter and setter methods for private variables in Java.

As both methods are public, we can easily access them using the object of the class. This way we can overcome the compilation error that pops up every time when we try to access the private data members of the class.

Q #1) How many Access Modifiers are there in Java?

Answer: Modifiers specify which class can access which other classes or methods or variables. Using access specifiers we can limit the access of various classes, methods, constructors, and variables and also ensure encapsulation and reusability of Java entities.

Q #4) Which Modifiers are not used for the class?

Answer: Protected and Private modifiers are not used for a class.

Q #5) What are Non-access Modifiers?

Answer: Modifiers that define the behavior of entities like class, method, or variables with which they are associated are non-access modifiers. As the name suggests they do not specify the access. Java provides various non-access modifiers like static, final, synchronized, volatile, abstract, etc.

Java provides many modifiers to access the variable, methods, and constructors.

If a variable is declared as private, then it can be accessed within the class. This variable won’t be available outside the class. So, the outside members cannot access the private members.

Methods/variables with public modifiers can be accessed by all the other classes in the project.

If a variable is declared as protected, then it can be accessed within the same package classes and sub-class of any other packages.

If a variable/method is defined without any access modifier keyword, then that will have a default modifier access. 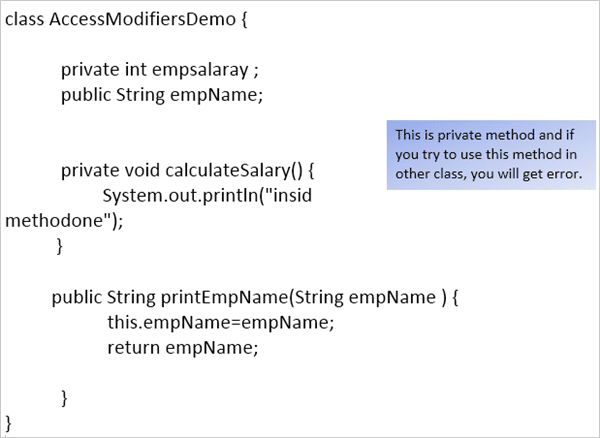 Accessing the members of the class in another class: 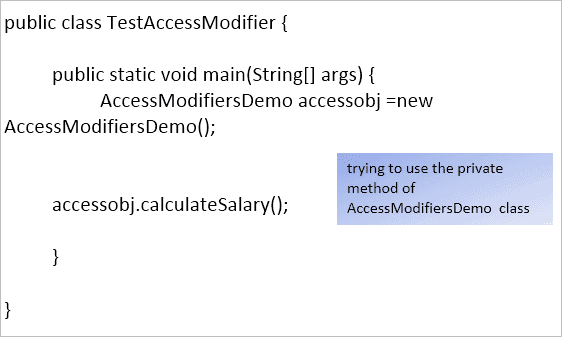 In this tutorial, we explored Access Modifiers in Java in detail. Java provides four types of access modifiers or visibility specifiers i.e. default, public, private, and protected. The default modifier does not have any keyword associated with it.

When a class or method or variable does not have an access specifier associated with it, we assume it is having default access. Public access modifier allows access to everything whether inside or outside the class or package. There is no limit on access in the case of the public modifier.

Protected visibility specifier allows access only to subclasses inheriting the class in which protected members are declared. Private access modifier allows the least accessibility with the private data members to be accessible only within the class.

Modifiers limit the scope of data members like classes, constructors, methods, and variables and define the limit as to which classes or packages can access them. Access specifiers encourage encapsulation and reusability in Java. Note that classes and interface cannot be protected or private.