When we are executing Java programs, the normal behavior or normal flow of the program is interrupted, due to some unexpected events.

For example, we open a file for reading the data. When the Open file call is executed, we find the file we are trying to open is missing. This results in the interruption of the normal flow of the program.

This event that affects or interrupts the normal flow of the program is called the “Exception”.

=> Visit Here To Explore The Java Training Series For All. 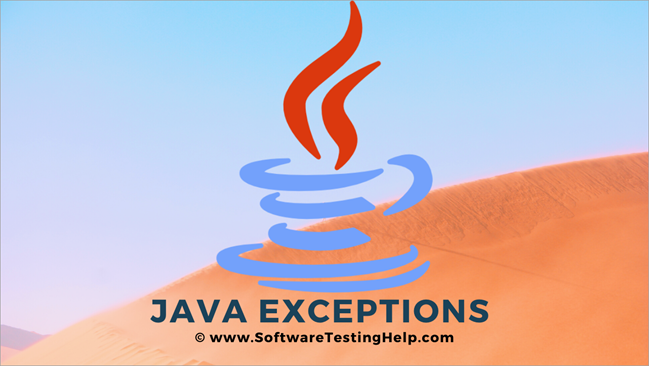 Here is a Video tutorial on Handling Java Exceptions:

When an exception occurs in the program, the program execution is terminated. As this is an abrupt termination, the system generates a message and displays it. The message generated by the system may be cryptic like some codes or unreadable.

Thus the normal user should understand why the program stopped its execution abruptly, he/she should know the reason. The system generated messages as a result of exception may not be helpful. In Java, we can handle the exception and provide meaningful messages to the user about the issue.

This handling of exception, commonly known as “Exception handling” is one of the salient features of Java programming.

Reasons For The Exception To Occur

We can have various reasons due to which exceptions can occur. If its an exception related to input, then the reason may be that the input data is incorrect or unreadable.

If we get an exception for file I/O then it is quite possible that the files we are dealing with do not exist. At some other time, there may be errors like network issues, printer not available or functioning, etc.

In a program, apart from exceptions, we also get errors. Thus, to handle the exceptions effectively, we need to be aware of the differences between error and an exception.

Thus an error in the application is more severe and the applications would crash when they encounter an error. Exceptions on the other hand occur in code and can be handled by the programmer by providing corrective actions.

What Is Exception Handling?

The Exception Handling in Java is a mechanism using which the normal flow of the application is maintained. To do this, we employ a powerful mechanism to handle runtime errors or exceptions in a program.

The major benefit of Exception handling is that it maintains the normal flow of the application despite the occurrence of an exception. When an exception occurs, the program usually terminates abruptly.

The below diagram shows the Exception hierarchy in Java. The class java.lang.Throwable (descendent of Object class) is the root class of Java Exception. The classes Exception and Error are derived from this class.
Exception class is the base class for all the other exceptions.

Given below is a hierarchy of Exception class in Java that will list out all the major exceptions that a Java programmer should be aware of. 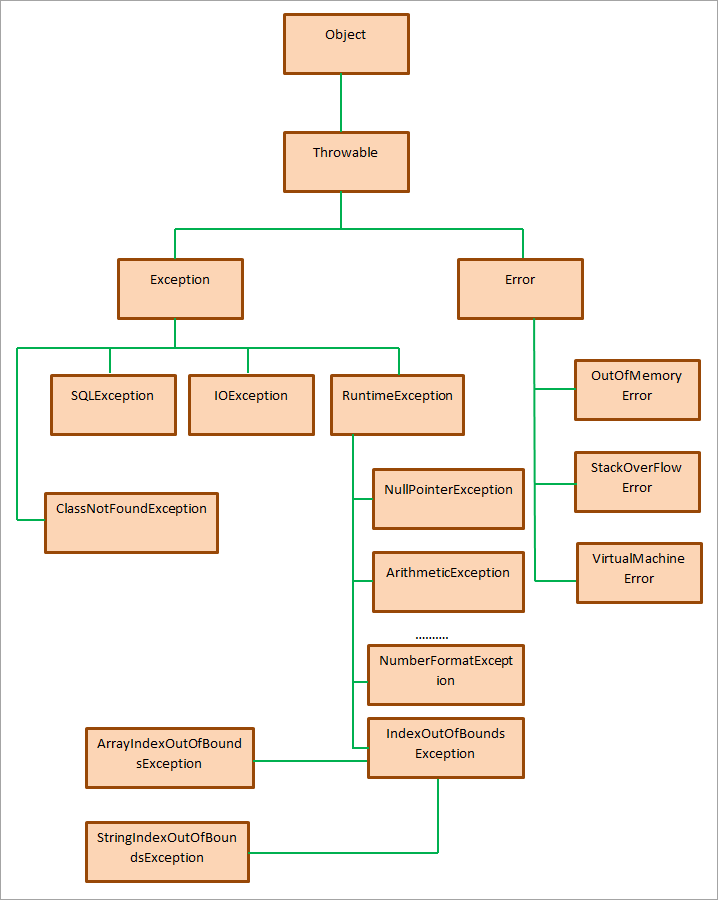 As seen in the hierarchy diagram, class Throwable has two direct subclasses i.e. Exception and Error. Exceptions arising from an external source are described in the Exception class.

The Constructors and Methods that the Exception class uses are presented below.

Next, we present a Java program to demonstrate a basic exception example. Here we provide a string variable initialized to a null value. When we try to print this variable, an exception is thrown as the String value cannot be null.

Types Of Exceptions In Java

In this section, we will discuss all the above three types.

Some exceptions are checked at the compile-time when the code is compiled. These are “Checked exceptions”. The Java program throws a compilation error when it finds that the code inside a program is error-prone.

We can take care of the compilation errors thrown by checked exception by handling the exceptions by either enclosing the code in a try-catch block or using the throws keyword.

The following Java program demonstrates the Checked Exceptions, FileNotFoundException, and IOException. In this program, we try to open a non-existing file and read from it.

As the file does not exist, the open file method throws FileNotFoundException. Next, when we try to read the contents of the file and close the file, the methods calls throw IOException.

In the above output, as the exception handler is absent, we get compilation errors for checked exceptions.

As seen from the output, when we handle the exception, it provides more meaningful output instead of the compilation errors.

The following program demonstrates a runtime unchecked exception that is caused by dividing a number by zero.

We see that the program is compiled successfully and then the ArithmeticException is thrown at runtime.

Apart from the above two exceptions, there are few more Checked exceptions including:

Error is usually an irreversible and irrecoverable situation in a program and when an error occurs, the programs crash. Some of the examples of errors in a program are OutOfMemoryError, AssertionError, and VirtualMachineError, etc.

Error class inherits from the Throwable class. Error describes a situation that cannot be handled and results in a program crashing.

Let’s discuss the OutOfMemory error in this section as an example of error.

We know that all the objects in Java are allocated using the new operator and are stored on the heap. When the heap goes out of memory, the Java Virtual Machine (JVM) cannot allocate the object. At the same time, the garbage collector cannot free any memory. This situation gives rise to the OutOfMemory error.

The OutOfMemoryError in Java will look as shown below:

The presence of OutOfMemoryError in a program means either too much data is being processed or the objects are being held for too long. Sometimes, it can also be a third-party library that uses up memory.

If an application has too many finalizers, then the class objects having the Finalize method are not reclaimed by garbage collector immediately but are queued up for finalization at a later time. Sometimes, the finalization cannot keep up with time, and heap memory is filled up resulting in OutOfMemoryError.

Another reason for OutOfMemoryError is that the heap size specified may be insufficient for the application.

The following code demonstrates the OutOfMemoryError that can occur because of a huge data size declared for an array.

Permanent Generation Area in memory can also be exhausted and could generate OutOfMemory error.

The size of the PermGen region is set during the JVM launch. If the user does not set the size, then the default size that is platform-specific is used.

Though the above two are usually the main causes of OutOfMemoryError occurrence, there may be other causes like Array size exceeding VM limit, etc.

Given below is a list of the major exceptions that occur in Java. We have provided programming examples for some of these exceptions. Note that these are built-in exceptions supported by Java.

The below program demonstrates the occurrence of ArithmeticException.

#5) IOException: IOException is thrown when the input-output operation fails or is interrupted.

#10) NumberFormatException: This exception is raised when a method could not convert a string into a numeric format.

#13) EOFException: EOFException is a part of the java.io package and is thrown when the end of file is reached and the file is being read.

The below Java program demonstrates the IllegalArgumentException.

In the above program, the IllegalArgumentException is thrown in the second call to setMarks function where we enter the marks that are out of range (> 45).

For example, in Enumeration, the nextElement () method is used to access the next element in the enumeration. If the element does not exist, then NoSuchElementException is thrown. Mostly Java Collections throw this exception.

The program given below demonstrates this.

For example, a thread cannot modify a collection when another thread is accessing it. If we allow two threads, then those two will simultaneously access the collection, and there will be inconsistencies.

The following example demonstrates the ConcurrentModificationException.

In the above program, while the ArrayList is being printed, we try to delete an element at the same time. This is the concurrent access and thus an exception is thrown.

So far we have discussed all the exceptions that are built-in or provided by Java language. Apart from these exceptions, we can also define our own exceptions. These are called Custom exceptions or user-defined exceptions.

Using custom exceptions, we can define our exceptions as per our needs.

The following example shows the custom exception that we defined for an Integer value.

Answer: An event that occurs during the execution of a program and disrupts the normal execution flow of the program is called Exception. The exception is unwanted & unexpected and may occur owing to external factors or programming errors.

Q #2) What is the difference between Error and Exception?

Answer: Exceptions are events that disrupt the normal flow of the program. We can handle exceptions in our program and continue with the program normally. An error is an irrecoverable event that cannot be handled and terminates the program.

Q #3) What do you mean by Exception Handling?

Answer: The process of specifying the sequence of steps in a program to handle the exception is called Exception Handling. By providing exception handlers in a program, we can ensure the normal flow of the program.

Q #4) What are the advantages of Exception Handling in Java?

Answer: Using exception handling we can maintain the normal flow of execution of an application. We can also propagate the errors up the call stack when we provide exception handlers.

Q #5) What is the use of Exception Handling?

With exception properly handled in the program, it can continue with its normal execution even when an exception occurs.

An exception is an event that occurs while the program is running and it disrupts the program execution. Because of which the software product will end abruptly.

When this exception occurs, Java creates an object with an error message and information about the class. This is the exception object.

Why we need an Exception in Java? 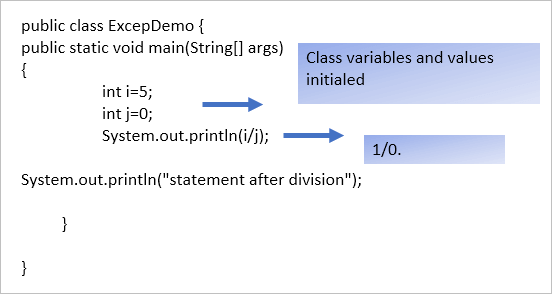 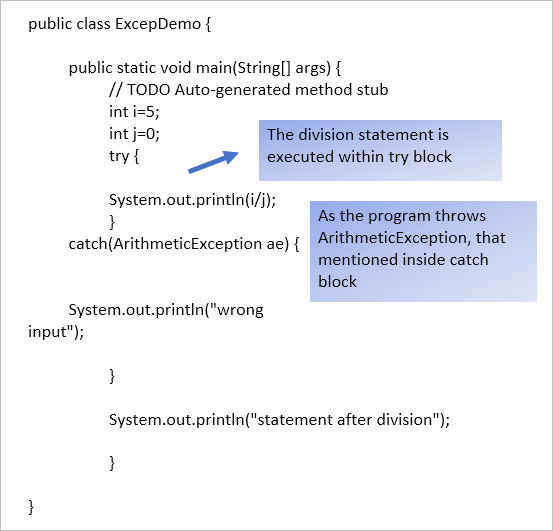 As Unchecked exceptions can be avoided by the proper programming (E.g. null pointer Exception, Arithmetic Exception)  will not have checked by the compiler. Unchecked Exception will be thrown at runtime. 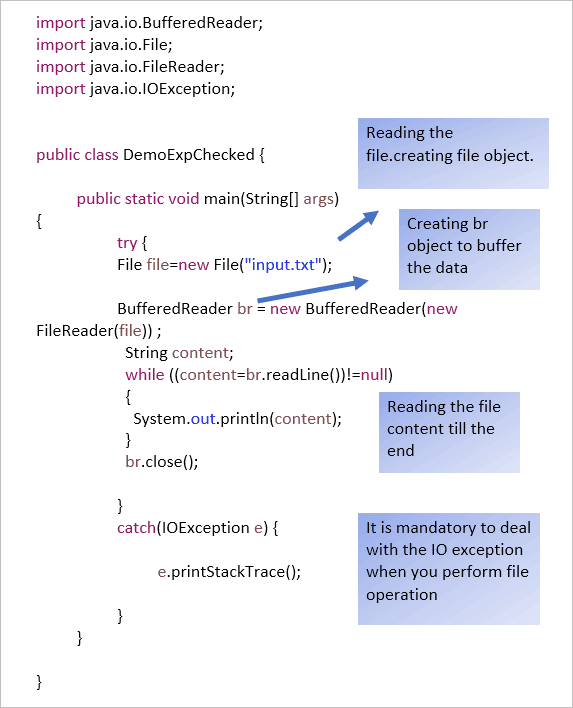 An error can occur due to program logical mistakes or any memory related to JVM problem.

Example: Memory out of bound error or stack overflow error. 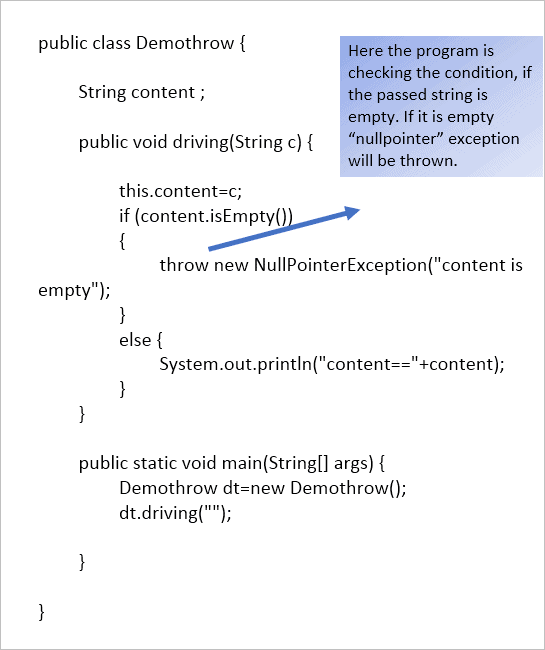 Throws are used to give information that this method throws this particular exception. When you call that particular method, you need to handle that exception. 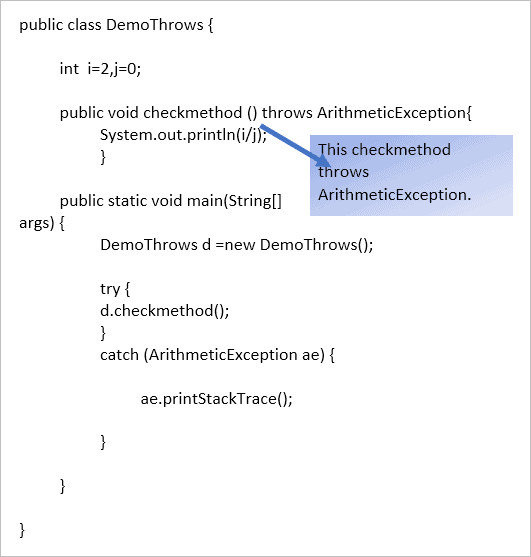