This tutorial explains what is Java used for. We will discuss the top real-world Java Applications including tools & technologies based on Java:

Since its development in 1995 by Sun Microsystems and in subsequent years, the language has become a backbone as far as millions of applications are concerned.

According to Oracle (that took over Java from Sun), almost 3 billion devices irrespective of their platform (whether it is Windows, Mac OS, UNIX, Android) use Java for development. Apart from these, even in areas like enterprise solutions and embedded systems, Java has made its mark. 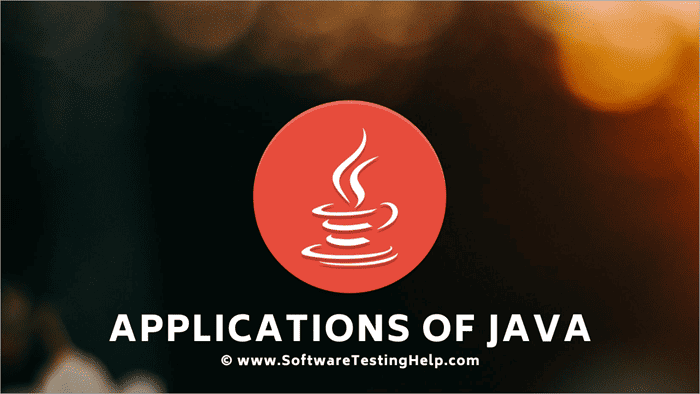 Today Java programming language is one of the most extensively used languages that is fast emerging in the software world. We find many applications of Java language in almost all the fields, be it an application or web development, big data, Artificial Intelligence, mobile development, etc.

We have summarized the applications of Java programming language in the following diagram: 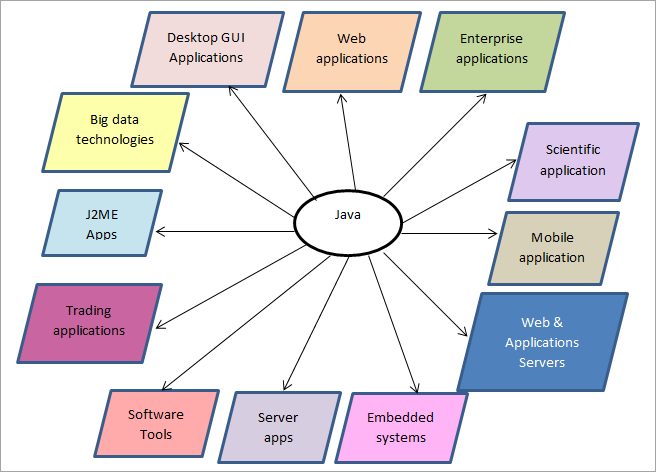 Let’s now discuss some in detail;

Java language provides a lot of features that help us to develop GUI applications. Java provides AWT, Swing API or Java Foundation Classes, or the latest JavaFX (from Java 8 onwards). These APIs/features help us develop advanced GUI applications including advanced tree-based or even 3D graphical applications.

Java language provides a feature named J2ME which is a cross-platform framework to build mobile applications that can run across Java-supported smartphones and feature phones.

According to Oracle, almost 97% of enterprise computers are running on Java. The higher performance and faster computing provided by Java have resulted in most enterprise applications to be developed in Java.

Java has powerful security and robustness features that make it popular for developing scientific applications. Java also provides powerful mathematical calculations that give the same results on different platforms.

Embedded systems are low-level systems that form a part of the larger electromechanical systems. These are tiny chips, processors, etc. and are also called integrated systems.

Java can produce robust tools that can handle application exceptions efficiently and is fast too as it is better for developing low-level programs.

Java is mostly used for these tools to write server-side applications that receive data from one server, processes it, and sends the processed data to the other servers or processes.

Most of the leading financial institutions like Barclays, Citi group, Goldman Sach, etc. use Java-based software tools for their business.

Many software tools used for development are written in Java. For example, IDEs like Eclipse, IntelliJ IDEA, and Net beans are all written and developed in Java.

These are also the most popular desktop GUI based tools used today. Earlier swing and AWT were the features that are mostly used to develop Softwares but nowadays JavaFx has become more popular.

The popular trading application Murex, which is used in many banks for front to bank connectivity, is written in Java.

Apart from iOS and android based mobile handsets, there are handsets from Nokia and Samsung that use J2ME. J2ME is also popular with products like Blu-ray, Cards, and Set-Top Boxes, etc. The popular application WhatsApp available on Nokia is available in J2ME.

Big data is the most popular and trending topic in the software industry today. Big data deals with analyzing and systematically extracting information from complex data sets.

An open framework that is associated with Big data is called Hadoop and is entirely written in Java. Features like automatic garbage collection, memory distribution, and stack provision system, Java gets an edge over other technologies. We can safely say that Java is the future of Big data.

Frameworks are tools that are used to develop applications. A framework is developed to make the developer’s life simpler and free of coding hazards so that developers can focus on business logic rather than coding jargon.

Choosing a particular framework for development depends on the tool that we are developing. If an application requires a lot of UI design, then we may choose a framework that provides rich UI developing tools and API.

Similarly, if we want to build a web application, we will choose a framework that provides a range of web APIs. So choosing the right framework depends mostly on applications being developed, visual aspect, database support, and such other factors.

In this section, we will present brief information on some of the popular Java frameworks that are widely used in today’s time.

We do not claim that one framework is better than the other; this is just a list that provides us handy information regarding various Java frameworks. 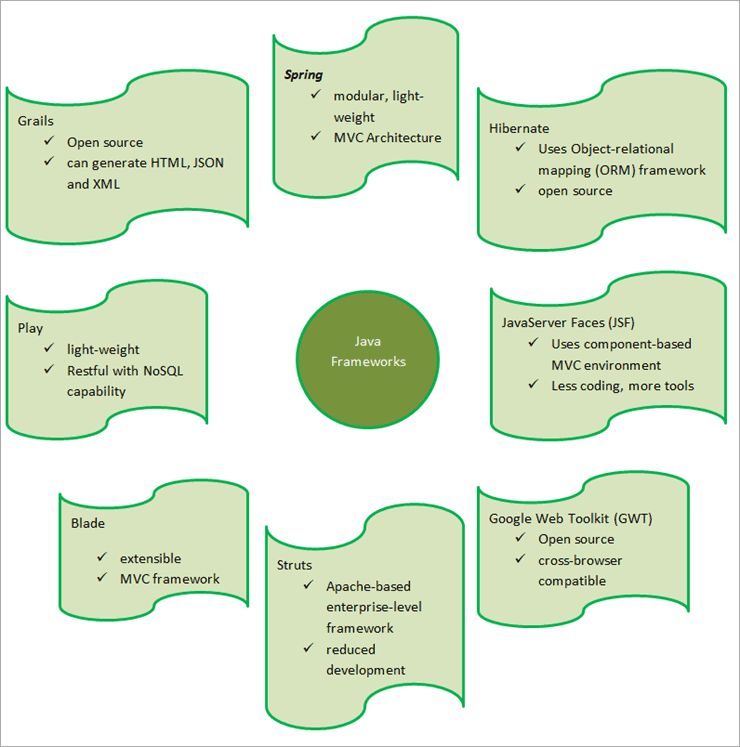 We have shown only the main features of each of the frameworks presented above. Each of these frameworks specializes in developing a range of Java applications from the web to rest applications.

Answer: Java is used in almost all fields, be it financial, e-commerce, enterprise, mobile, distributed, or big data applications. For example, most of the financial software used by big players like Citigroup, Barclays, etc. is Java-based. E-commerce giant Amazon uses Java-based applications for its operations.

Answer: We can use Java in our daily lives to create any software however small or big. These tools can run on a single computer or in distributed systems. They can be a small module, a big application, or even an applet. Hence Java can serve our every need.

Answer: Here are some of the popular apps developed in Java:

Answer: Yes. Any Windows system might run into trouble by downloading new programs or opening websites if it doesn’t have the latest Java version.

As we have already seen in this tutorial, Java is the most popular language in the software world today and you can find its applications in almost every field. Because of its high performance and robustness as well as the security features, Java is mostly used in banking applications.

Java is also emerging as the preferred language in Big data field which is trending today. Having seen the applications of Java in the future tutorials we will discuss the major differences between Java and few other programming languages before jumping to Java topics in detail.