All of us are aware of the fact that, for managing all the hardware resources of your laptop or desktop and for enabling proper communication between software and your computer hardware, there is one word without which software would not function i.e. ‘Operating System’ OS. Just like Windows XP, Windows 7, Windows 8, MAC; LINUX is such an operating system.

LINUX is referred to as the most used operating system and is best known for its efficiency and fast performance. LINUX was first introduced by Linux Torvalds and is based on Linux Kernal.

It can run on different hardware platforms manufactured by HP, Intel, IBM, etc.

In this article, we will see multiple Linux interview questions and answers which will not only help to prepare for interviews but will also help in learning all about Linux. Questions include Linux admin, Linux commands interview questions, etc. 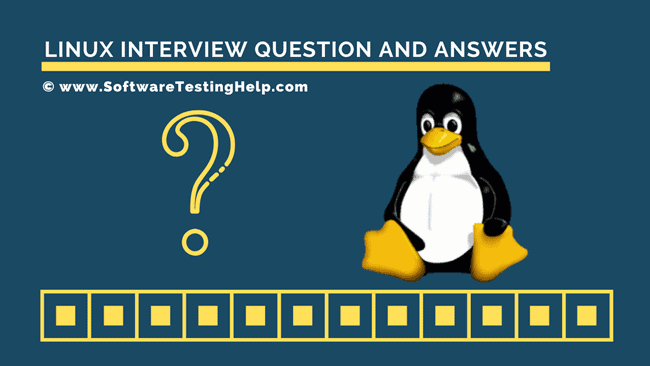 Q #1) What do you understand by Linux Kernal? Is it legal to edit it?

Answer: ‘Kernal’ basically refers to that core component of the computer operating system that provides basic services for the other parts as well as interacts with user commands. When it comes to ‘Linux Kernal’, it is referred to as low-level system software providing an interface for user-level interactions.

Linux Kernal is considered as free and open-source software which is capable of managing hardware resources for the users. As it is released under General Public Licence (GPL), it becomes legal for anyone to edit it.

Q #2) Differentiate between LINUX and UNIX?

Answer: Although there are multiple differences between LINUX and UNIX, enlisted points in the below table cover all the major differences.

Answer: Linux operating system basically consists of 3 components. They are:

Answer: LINUX is used widely because it is completely different from other operating systems where every aspect comes with something extra i.e. some additional features.

Some of the major reasons to use LINUX are listed below:

Q #5) Enlist the features of the Linux operating system?

Answer: Following are some important features of the LINUX operating system:

Answer: LILO (Linux Loader) is the boot loader for the Linux operating system to load it into the main memory so that it can begin its operations. Bootloader here is a small program that manages a dual boot. LILO resides in MBR (Master Boot Record).

Its major advantage is that it allows the fast bootup of Linux when installing in the MBR.

Its limitation lies in the fact that it is not possible for all computers to tolerate modification of MBR.

There are different commands and tools available to manage the Swap space usage.

Q #8) What do you understand by the Root account?

Answer: As the name suggests, it is like a system administrator account which gives you the ability to fully control the system. The root account serves as the default account whenever Linux is installed.

Below mentioned functions can be performed by the Root account:

Answer: When there are multiple windows available on the current desktop and there appears the problem of minimizing and maximizing windows or restoring all the current programs, there ‘Virtual Desktop’ serves as an alternative. It allows you to open one or more programs on a clean slate.

Virtual desktops are basically stored on a remote server and serve the following benefits:

Q #10) Differentiate between BASH and DOS?

Answer: The basic differences between BASH and DOS can be understood from the below table.

Answer: GUI stands for the Graphical User Interface. GUI is considered as the most attractive and user-friendly because it consists of the usage of images and icons. These images and icons are clicked and being manipulated by the users for the purpose of communication with the system.

Answer: CLI stands for Command Line Interface. It is a way for humans to interact with computers and is also known as the Command-line user interface. It relies on textual request and response transaction process where user types declarative commands to instruct the computer to perform operations.

Q #13) Enlist some Linux distributors (Distros) along with its usage?

Answer: Different parts of LINUX say kernel, system environment, graphical programs, etc are developed by different organizations. LINUX Distributions (Distros) assemble all these different parts of Linux and give us a compiled operating system to be installed and used.

There are around six hundred Linux distributors. Some of the important ones are:

Q #14) How can you determine the total memory used by LINUX?

Answer: It is always required to keep a check on the memory usage in order to find out whether the user is able to access the server or the resources adequately. There are roughly 5 methods that determine the total memory used by Linux.

This is explained as below:

Q #15) Explain the 3 kinds of file permissions under LINUX?

Answer: Every file and directory in Linux are assigned three types of owners namely ‘User’, ‘Group’, and ‘Others’. The three kinds of permissions defined for all the three owners are:

Q #16) What is the maximum length for any file name under LINUX?

Answer: The maximum length for any file name under Linux is 255 characters.

Q #17) How permissions are granted under LINUX?

Answer: A system administrator or the owner of the file can grant permissions using the ‘chmod’ command. Following symbols are used while writing permissions:

Permissions also include a single letter which denotes

Q #18) What are the different modes when using the vi editor?

Answer: The 3 different kinds of modes in vi editor are enlisted below:

Q #19) Explain the Linux Directory commands along with the description?

Answer: The Linux Directory commands along with descriptions are as follows:

Q #20) Differentiate between Cron and Anacron?

Answer: Difference between Cron and Anacron can be understood from the below table:

Q #21) Explain the work of Ctrl+Alt+Del key combination on the Linux operating system?

Answer: The work of Ctrl+Alt+Del key combination on the Linux operating system is the same as is for Windows i.e. to restart the system. The only difference is that there is no confirmation message displayed and a system is rebooted directly.

Q #22) What is the role of case sensitivity in affecting the way commands are used?

Answer: Linux is considered a case sensitive. Case sensitivity can sometimes serve as the reason for displaying different answers for the same command as you might enter the different formats of commands each time. In terms of case sensitivity, the command is the same but the only difference occurs with regard to uppercase and lowercase letters.

Answer: For executing any commands user uses a program known as the shell. Linux shell is basically a user interface used for executing the commands and communicating with Linux operating system. Shell does not use the kernel to execute certain programs, create files, etc.

There are several shells available with Linux which includes the following:

There are basically two types of Shell commands

Answer: As the name suggests, the shell script is the script written for the shell. This is a program file or says a flat text file where certain Linux commands are executed one after another. Although the execution speed is slow, the Shell script is easy to debug and can also simplify everyday automation processes.

Q #25) Explain the features of a Stateless Linux server?

Answer: The word stateless itself means ‘no state’. When on a single workstation, no state exists for the centralized server, and then the stateless Linux server comes into the picture. Under such conditions, scenarios like keeping all the systems on the same particular state can occur.

Some of the features of Stateless Linux server are:

Q #26) What are system calls used for process management in Linux?

Answer: Process management in Linux uses certain system calls. These are mentioned in below table with a brief explanation

Answer: There are many commands present in Linux which are used to look at the contents of the file.

Some of them are enlisted below:

There are basically three streams available in which input and output of the Linux environment are distributed.

These are explained as below:

Q #29) Why is Linux considered more secure than other operating systems?

Answer: Linux is an open-source operating system and nowadays it is growing rapidly in the tech world/market. Although, the entire code written in Linux can be read by anyone, then also it is considered more secure because of the following reasons:

Answer: Command grouping is basically done by the use of braces ‘()’ and parenthesis ‘{}’. Redirection is applied to the entire group when the command is grouped.

Answer: Linux pwd command displays the whole path of the current location you are working in starting from the root ‘/’. For Example, to print the current working directory enter “$ pwd”.

It can be used for the below purposes:

Q #32) Explain the Linux ‘cd’ command options along with the description?

Answer: ‘cd’ stands for change directory and is used to change the current directory on which the user is working.

Following purposes can be served with ‘cd’ commands:

Few of the ‘cd’ options are enlisted below

Q #33) What is know about grep commands?

For example: Suppose we need to locate the phrase “our orders” in an HTML file named “order-listing.html”.

Then the command will be as follows:

The grep command outputs the entire matching line to the terminal.

Q #34) How to create a new file and modify an existing file in vi editor? Also, enlist the commands used to delete information from vi editor.?

Answer: The commands are:

Answer: Every computer is connected to the network internally or externally for the purpose of exchanging information. Network troubleshooting and configuration are essential parts of and network administration. The networking commands enable you to quickly troubleshoot connection issues with another system, check the response of another host, etc.

A network administrator maintains a system network that includes network configuration and troubleshooting. Mentioned below are few commands along with their description:

Mentioned below are few commands along with their description

Thus concluding this article with the learning fact that Linux is a complete operating system having different versions that suit any type of user (new/experienced). Linux is considered as a lot more user-friendly, stable, secure and reliable which can run non-stop for years without a single reboot.

This article has covered every part of Linux which can ask any interview questions. I hope you have got a clear idea about the topic. Just keep learning and all the best.