Unix Vs Linux: Learn what is the Core Difference between UNIX and Linux Architecture, Kernel And Commands

Linux is nothing but a UNIX clone which is written Linus Torvalds from scratch with the help of some hackers across the globe.

Linux is the most popular variant and there comes in a number of different distributions. 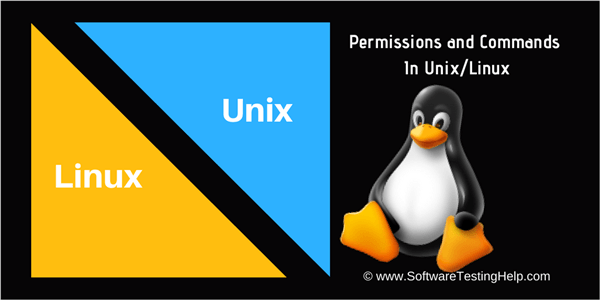 Unix is a family of multitasking, portable, multi-user computer operating systems, which also have time-sharing configurations.

Unix systems use a centralized OS kernel which is responsible for managing the entire system.

The programming interface, file abstraction, built-in networking and persistent background processing called daemons are the other features and capabilities that are supported by a Unix OS.

Unix is considered as the mother of most of the operating systems.

The design of Unix systems is based on “Unix Philosophy” which includes the following characteristics:

It’s worth mentioning here the below quote about Unix Philosophy:

“Although that philosophy can’t be written down in a single sentence, as its heart is the idea that the power of a system comes more from the relationships among programs than from the programs themselves. Many UNIX programs do quite trivial things in isolation, but, combined with other programs, become general and useful tools.” – Brian Kernighan & Rob Pike

The below diagram will depict you the Unix architecture. 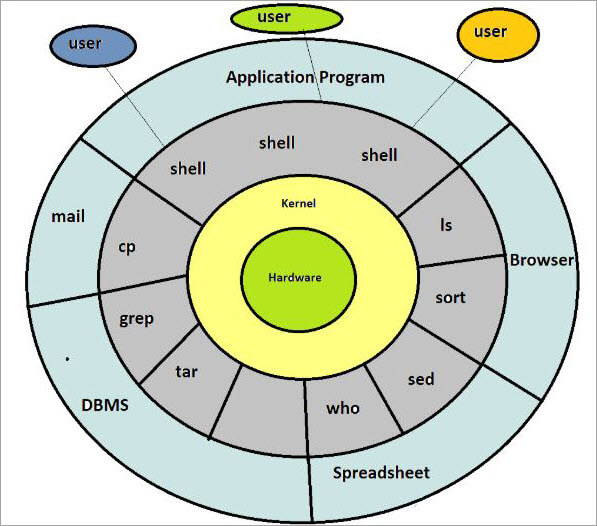 The master control program of Unix is its Kernel. The kernel has full control over the entire system. It has subsystems that offer services to file system handling, resource handling, memory management, start & stop programs and few other low-level core tasks.

The kernel is the heart of the OS and acts as an interface between the user and hardware. Each kernel subsystem has certain features like concurrency, virtual memory, paging, and a virtual file system.

In the outer layers of the architecture, we have the shell, commands and application programs. Shell is the interface between the user and the kernel. Shell and the user types in the commands, interpret these commands and call the computer programs accordingly.

Example of the Unix operating system is Solaris and HP-UX. The largest distributors of UNIX systems include IBM, HP, and SUN.

By now you would have got a fair idea about Unix. Let’s now explore Linux in detail.

People do confuse a lot between the terms Unix and Linux and they generally ask questions like “Is Unix Different from Linux?” / “Are Linux and Unix the same thing?” / “Is Linux like Unix?”/ “Is Linux built on Unix?”.

Here is the answer to all such questions. First, let me clear your confusion in a one-liner. Linux and Unix are different but they do have a relationship with each other as Linux is derived from Unix.

Linux is not Unix, but it is a Unix-like operating system. Linux system is derived from Unix and it is a continuation of the basis of Unix design. Linux distributions are the most famous and healthiest example of the direct Unix derivatives. BSD (Berkley Software Distribution) is also an example of a Unix derivative.

At this juncture, it is important for us to make you clear about what is Unix-like?

A Unix-like OS (also called as UN*X or *nix) is the one that works in a way similar to Unix systems, however, it is not necessary that they conform to Single UNIX Specification (SUS) or similar POSIX (Portable Operating System Interface) standard.

SUS is a standard which is required to be met for any OS to qualify for using ‘UNIX’ trademark. This trademark is granted by ‘The Open Group’.

Few Examples of currently registered UNIX systems include macOS, Solaris, and AIX. If we consider the POSIX system, then Linux can be regarded as Unix-like OS.

As per Linux kernel official README file, Linux is a UNIX clone that is developed from scratch by Linus Torvalds and team. It targets for POSIX compliance. The Linux kernel code was completely written from scratch. It is designed in such a way so that it acts like Unix but it does not have the original Unix code in it.

It is also significant to note that Linux is just the kernel and not the complete OS. This Linux kernel is generally packaged in Linux distributions which thereby makes it a complete OS.

Thus, Linux is only the Kernel, while Linux distributions can be treated as the OS. On the other hand, UNIX in itself is a complete OS as everything (all required application tied together) comes from a single vendor. For Example, Solaris.

Linux distribution (also called as a distro in short) is an operating system that is created from a collection of software built upon the Linux Kernel and is a package management system.

Most of the software included in Linux distribution is free and open source. They may include some proprietary software like binary blobs which is essential for a few device drivers. 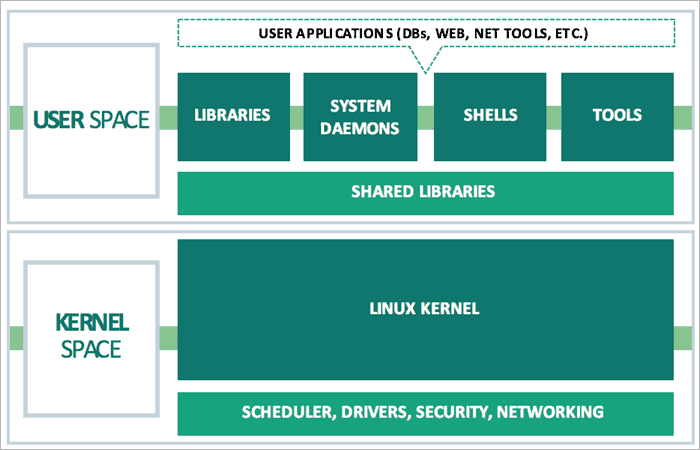 For Example, we have OpenWrt Linux based OS for embedded devices, Linux Mint for Personal computers and Rocks Cluster Distribution for supercomputers. In total, around 600 Linux distributions do exist.

It will be interesting for you to know that Google’s popular Android mobile OS is based on Linux. Every iteration of the Android OS is built on the current Linux kernel. 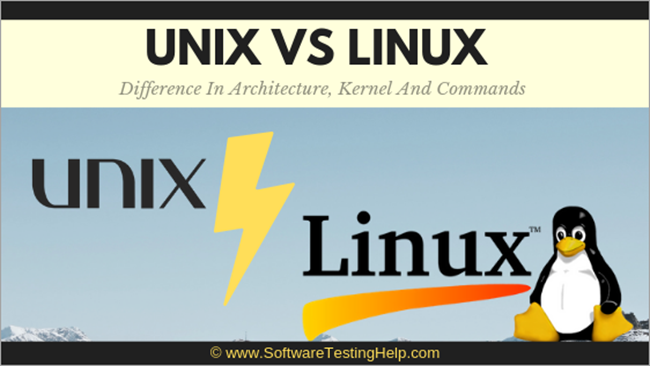 Difference Between Unix and Linux

We hope you must have understood the core differences between Unix and Linux from this article.

Let us now see some more important differences between Linux and Unix in the below tabular format:

As Linux alone is just a kernel, it is worth discussing the major differences between the Linux Kernel and Unix kernel.

There are three types of the kernel i.e. monolithic, micro and hybrid (combination of monolithic and micro) as seen in the below image.

In monolithic kernel architecture, the entire OS works in single kernel space. It single-handedly defines a high-level virtual interface on top of the computer hardware.

Though Linux kernel derives most of its characteristics from Unix/ Unix-like kernels, however, there are some significant points of differences between the two.

In microkernel architecture, the core services of the OS run in one process while the other services run in different processes.

In µ kernel, the near-minimum amount of mechanisms is included in the kernel mode. These mechanisms include basic IPC (inter-process communication), scheduling and low-level address space management.

In terms of source code size, generally, a microkernel is smaller than the monolithic kernel. 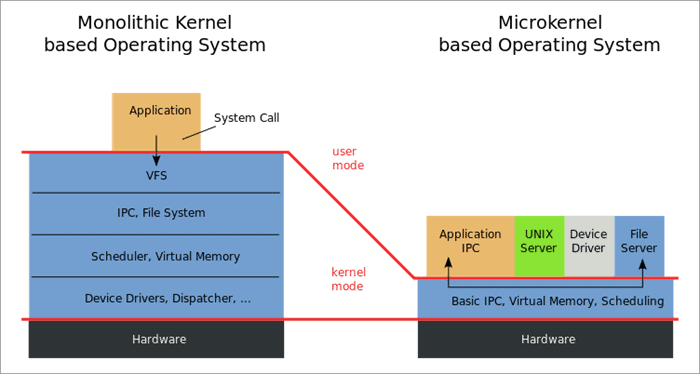 There are certain differences between the shell commands i.e. even among the versions of the same Unix variant. However, what varies most is the internal shell that is built-in rather than the presentation.

On the whole, efforts are made to keep Linux as close as possible to Unix by complying with the POSIX standards. Hence, the terminal commands in Linux distros and Unix operating systems are not exactly the same, but, there are not many differences too.

Each Linux distribution in itself has its own way of execution.

In IBM AIX, which is a proprietary Unix OS, we use -finger command to check who is logged into the system. But this command is not used in Linux. In Linux, we use the pinky command to fetch the same result.

So far, in this article, we have seen the generalized core differences between Linux and Unix. These differences can be more specific if we compare the exact versions of the two. Let us see this through some examples.

While talking about stability and hardware integration, Solaris seems to better here. Linux also has a faster rate of development when compared to Solaris.

There are few other technical differences between the two, but here we are limiting our comparison only to performance.

MacOS is a certified Unix OS. It has its own kernel named XNU. It is used in Apple’s computers which are considered as the most reliable PCs.

MacOS is relatively easy to set up. On the other side, Linux is cheaper and has a lot of open source software available as against Apple’s proprietary solutions. Also, Linux is more flexible as it can be executed on almost any hardware whereas MacOS can run only on Apple hardware. For Example, iPhones.

Unix is very old and is said to be the mother of all operating systems. Linux kernel is also derived from Unix. The major difference between Unix and Linux based operating systems is not in the presentation part, but on how they work internally, i.e. mainly at the kernel part.

The difference between the two will also depend upon which exact versions of Linux and Unix you are comparing.

It’s also essential to state that Linux (and many other Unix-like OS) are free to obtain and modify, whereas Unix operating systems are not. Cost is always a major concern while deciding what technology to use, and Linux has an edge in this regard.

Linux is more flexible and free when compared to true Unix systems and that is why Linux has gained more popularity. While discussing the commands in Unix and Linux, they are not the same but are very much similar. In fact, the commands in each distribution of the same family OS also varies.

There are studies which say that Linux is growing fast than any other OS in the past few years. Hence, in the future, Linux may tend to leave UNIX installations far behind.

Hope you enjoyed this informative article on Unix and Linux difference!!