If you have recently bought a new PC or installed a new operating system, you must have gone through the process of partitioning the storage drive of your computer. The storage drive isn’t capable of storing data until partitions are created and formatted to either an NTFS or FAT file system.

At this stage, most of us face the dilemma of choosing one or the other partition styles. In this article, we will talk about two styles of disk partitioning- MBR and GPT. Further, we will also discuss the difference between MBR and GPT. 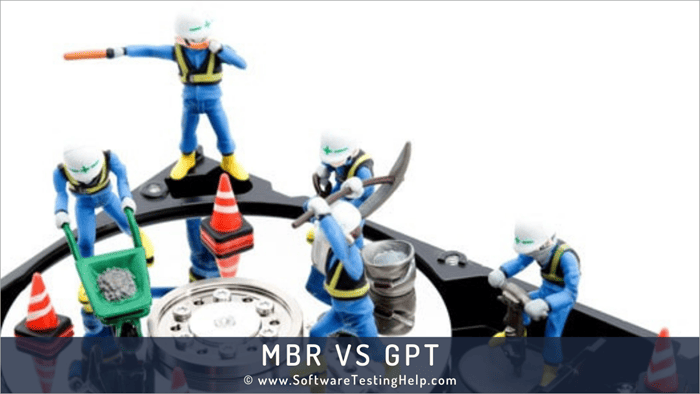 Let’s get started by gaining a basic understanding of MBR and GPT. Let’s begin with MBR.

MBR stands for Master Boot Record. To explain it more, it is simply a part of a hard disk where all the information about the disk can be found. We can find it in the boot sector and it contains details of types of partitions and also the code which is required at the time booting the operating system of the computer.

MBR can have a lot of different forms, but what is common for all these forms is that they all have a size of 512 bytes, a partition table, and bootstrap code.

Let us look at some features of MBR.

Let us look at how a simple structure of MBR looks like. This is explained in the picture below:

It also has some shortcomings. These are mentioned below:

With these limitations of MBR, users often opt for different styles for partitioning. One of the most common styles of partitioning other than MBR is GPT.

Let us first understand what GPT is before we compare it with MBR.

GPT stands for GUID Partition Table. It is the latest style of disk partitioning and is known to be a quick successor of MBR. GPT maintains the data regarding the organization of partitions and the boot code of the operating system all across the drive.

This ensures that in the event of anyone partition getting corrupted or deleted, data can still be retrieved and there will be no issues with the process of booting. This is one reason why GPT has an edge over MBR.

The below image shows a simple GPT image layout. 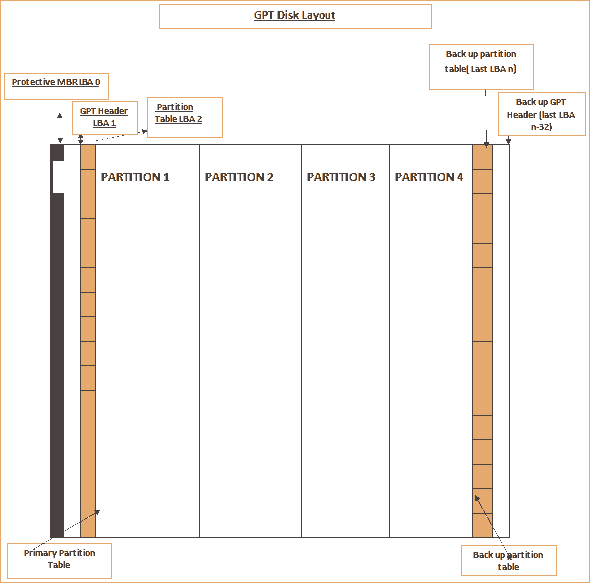 In the above image, we can see that the GPT disk is divided into three parts:

When is MBR the right choice to make?

The only reason any user will choose MBR over GPT is when Windows is installed on a BIOS-based system and the drive is to be used as a boot drive. MBR formatting will also be a sane choice to make for users who work on drives less than 2 TB or any previous versions of Windows, as it will maintain compatibility with the system.

The above table lays down MBR vs GPT performance. Based on the points mentioned above, GPT is far more superior in terms of performance if UEFI boots are supported. It also provides advantages of stability and speed and enhances the performance of the hardware which is largely due to the structure of UEFI.

Let us also look at some other details about MBR and GPT.

The next section of this article talks about finding the most suitable between MBR and GPT for SSD.

Users have to make a choice between MBR and GPT styles of partitioning when a drive is plugged into Windows.

A choice between GPT vs MBR also largely depends on the Operating System. SSDs are more compatible with the latest versions of Windows- Windows 10. If SSDs are used on Windows XP, it can bring down the lifespan and performance of the drive. This happens because the TRIM feature is not available.

So, in order to make a choice between GPT vs MBR for SSD, the above-mentioned factors have to be considered promptly. GPT clearly makes a more sensible choice for SSDs.

How To Find If Your Computer Has MBR or GPT

Step 2: Right-click on the disk number. 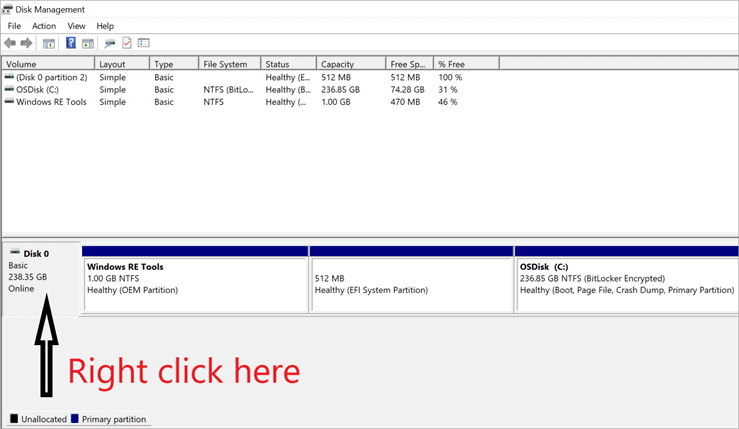 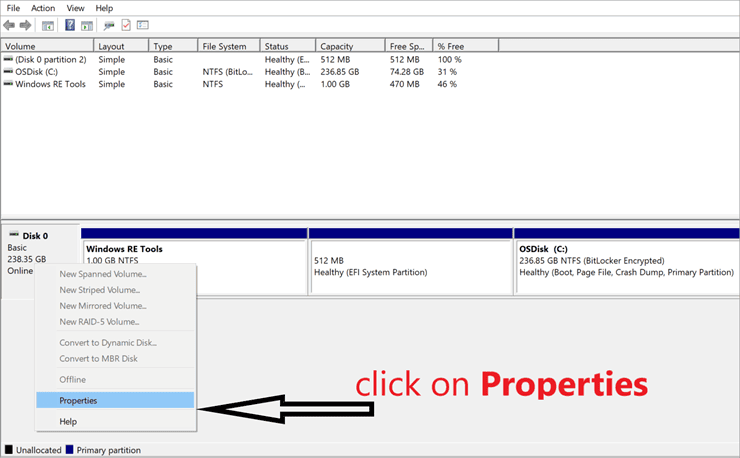 Step 4: Select the “Volumes” tab as shown in the below screenshot. 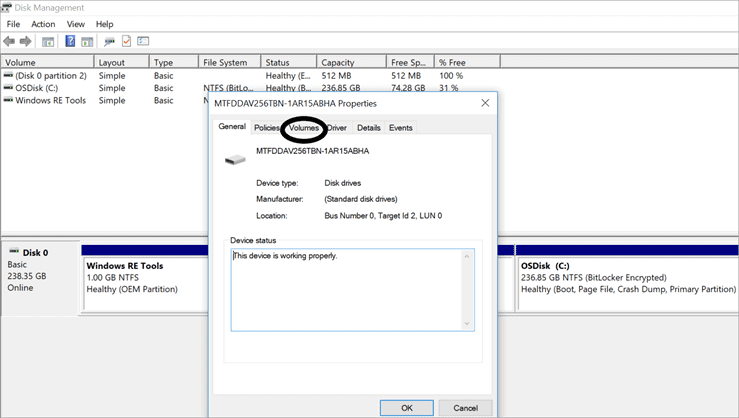 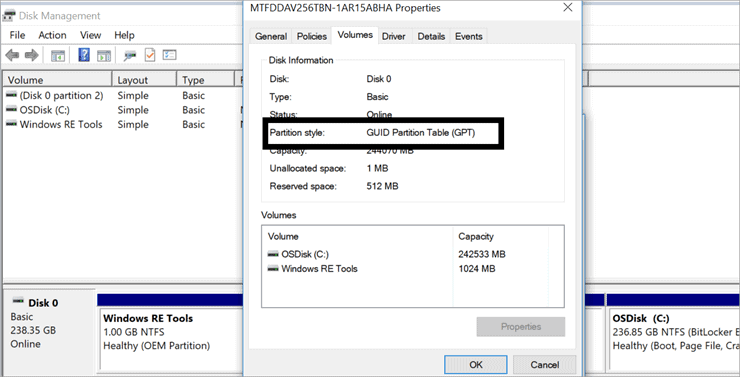 Let us now look at some frequently asked questions which users have when choosing between Master Boot Record vs GUID Partition Table.

Answer: A choice of MBR or GPT depends on the number of partitions one wants to create. MBR has a limitation of only up to 4 primary partitions, whereas GPT allows the creation of up to 128 primary partitions. So, GPT is the most suitable choice if more partitions are to be created.

Answer: It is possible to mix MBR and GPT only on those systems which support GPT. GPT requires a UEFI interface. When UEFI is supported on a system, it is important that the boot partition must be on the GPT disk. However, the other hard disks can either be MBR or GPT. One dynamic disk group can accommodate both MBR and GPT.

Answer: All the versions of Windows can read GPT drives, but booting is not possible in the absence of UEFI. The latest OS like Windows 10, MAC uses GPT. Linux also has in-built support available for GPT.

Answer: UEFI can support both MBR and GPT. It works well with GPT to get rid of the size and number of partition limitation of MBR.

Answer: UEFI stands for Unified Extensible Firmware Interface. It is a software interface that is capable of repairing computer systems in the absence of an Operating system.

Q #6) Are there chances of data loss if GPT is converted to MBR?

In this article, we have discussed two important styles of disk partitioning–MBR (Master Boot Record) and GPT (GUID Partition Table).