We saw the list of best DevOps service providers in our last tutorial.

DevOps is not just about tools alone but it is also a set of best practices that enable us to bridge the gap between the development and operations teams in the areas of continuous integration and deployment by using an integrated set of tools to automate the software delivery.

Let’s now take a look at some of the most frequently asked questions in the DevOps interview along with the possible responses that you can give. The responses may vary based on one’s own work and experiences. 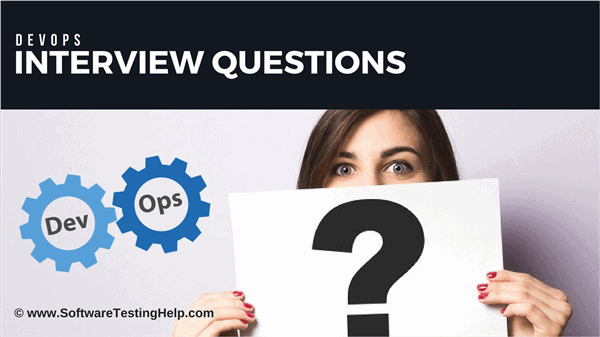 Given below is a list of most frequently asked DevOps questions in the interviews:

Q #2) Explain a few prerequisites that are useful for DevOps implementation.

Q #3) What are the best practices for DevOps implementation?

Answer: DevOps implementation varies from one organization to another organization. Today organizations are looking to deliver the software faster and from that point of view here are my thoughts on how DevOps can bring about efficient communication with all the stakeholders including the operations team.

Q  #4) What are the key components of DevOps?

Answer: Continuous Integration is a very important component of the Agile process. Typically, developers work on features or user stories within a sprint and commit their changes to the version control repository.

Once the code is committed, then the entire work of developers is well integrated and the build is performed on a regular basis based on every check-in or schedule. Hence, Continuous Integration as a practice forces the developer to integrate their changes with the others so as to get early feedback.

Answer: Continuous Delivery is an extension of Continuous Integration which primarily helps to get the features that the developers are developing out to the end-users as soon as possible. During this process, it goes through various stages of QA, Staging, etc., and then for delivery to the PRODUCTION system.

Answer: From the above goal of Continuous Integration which is to get the application out to end-users are primarily enabling continuous delivery. This cannot be completed without a sufficient amount of unit testing and automation testing.

Hence, we need to validate that the code produced and integrated with all the developers who perform as required.

Answer: As the application is developed and deployed, we do need to monitor its performance. Monitoring is also very important as it might help to uncover the defects which might not have been detected earlier.

Q #9) How will you approach when a project needs to implement DevOps?

Answer: Following approaches can be used but that will vary based on the actual project scenarios or from organization to organization

Stage 1: For any DevOps implementation, an assessment of the existing process and implementation for around 2 to 3 weeks taking an average of 5 applications is a must to gauge the AS-IS process, identifies the improvement areas and provides a roadmap for the implementation.

Typically a senior profile like a DevOps architect should be involved to conduct this assessment.

Stage 2: A pilot POC can be done to showcase the end to end working of DevOps. Once this has been accepted and approved by the end-users only then the actual implementation, handover and rolls out the plan for the projects involved should be carried out.

Any pieces of training required will also need to be imparted to the process or tools. DevOps architects, engineers, and testers would need to be involved at this stage.

Stage 3: The projects should now be in DevOps mode with all the components of continuous integration/delivery/testing and monitoring that is being followed.

Q #10) Can DevOps be applied to a Waterfall process? Explain the significance of the Agile process in DevOps implementation.

Answer: In the waterfall process, as all of us are aware initially complete Requirements are gathered, next the System is designed, Implementation of the System is then done followed by System testing and deployed to the end-users. In this process, the problem was that there was a huge waiting time for build and deployment which made it very difficult to get the feedback.

The solution to the above problem was that the Agile process has to bring in agility in both development and operations. The agile process could be the principal or a certain pre-requisite may be required for DevOps implementation. DevOps goes hand in hand with the Agile process.

The focus area is to release the software in a very timely manner with shorter release cycles and quick feedback. So, the agile process focus will mainly be on speed and in DevOps, it works well with the automation of various tools

Answer: In an Agile Sprint, For Example, there are many features or user stories that are developed, tested and ready for deploying. But based on customer scenarios and priorities not all would be deployed. So, here in continuous delivery, it is very important to keep the code readily available for deployment.

In Continous Deployment, all the changes developed by the developer goes through various stages to be deployed to the PRODUCTION environment in an automated way.

Q #12) What is your expertise on the DevOps projects?

Answer: Explain your role as a DevOps Engineer and how you were working as a part of the 24*7 environment and maybe in shifts, the projects involved in automating the CI and CD pipeline and providing support to the project teams.

Hence, taking complete responsibility for maintaining and extending the environments for DevOps automation to more and more projects and different technologies (Example: .NET, J2EE projects) involved within the organization.

Also, explain the process (Example Agile) and tools that were involved in an end to end automation. You could also talk about your experience, if any, in DevOps support over the Cloud environment.

Q #13) What are the top 10 DevOps tools that are used in the industry today?

Q #14) Can you explain the uses of the tools mentioned in the above question and how they connect to give a DevOps model (CI/CD)? 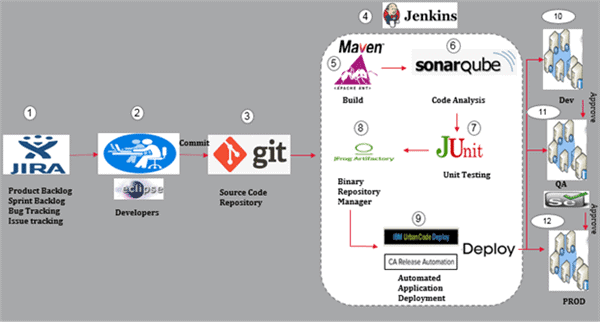 Q #15) What is configuration management in terms of infrastructure and mention a few popular tools used?

Answer: Configuration management consists of practices and the various tools involved to automate the delivery and infrastructure operations. It is all about keeping the server ready (Example Installing system packages, network configuration settings) for application deployment once the application is developed.

So the Ops or the system admin needs to ensure parity in different environments (Dev, QA, PROD, etc…) by provisioning the systems.

Q #16) Which scripting tools are used in DevOps?

Q #18) Have you been involved in DevOps implementation in the cloud? If yes which cloud computing platform?

Q #19) Explain some of the metrics that were followed for DevOps success.

Some of the examples are as follows:

Q #20) What are your expectations from a career perspective of DevOps?

Answer: To be involved in the end to end delivery process and the most important aspect of helping to improve the process so as to enable the development and operations teams to work together and understand each other’s point of view.

That was the list of most popular DevOps Interview Questions.

At the beginning of this series of DevOps tutorials, we came to know what exactly is DevOps, its process and certain possible ways of implementing them.

The DevOps questions in this tutorial should hopefully help you to conquer the DevOps interview and set you up on the path of a great career in this field. As the questions mentioned are from a DevOps perspective, you should also be proficient in the Agile process and the tools mentioned in this article for CI and CD.

Hope, you enjoyed the whole range of tutorials in our DevOps series and I’m sure that you must have gained immense knowledge on DevOps concept!! We wish you all the success!!!