List of Most Popular CSS Interview Questions with Answers:

The CSS questions covering almost all the basic and advanced CSS categories are explained with examples.

CSS is one of the most essential features of Web development. It is a language by which we can describe the appearance of web pages.

Hence, it is essential to cover up all the basic and advanced portions of the CSS. In order to become a good web developer and crack the web developer interview successfully, you need to learn CSS.

Given below is the list of most frequently asked CSS interview questions and answers in simple terms for your easy understanding.

CSS controls the layout of several HTML web pages. CSS is referred to as the Cascading Style Sheet.

Q #2) Name all the modules which are used in the current version of CSS.

Answer: There are several modules in CSS as stated below:

Q #3) Distinguish between CSS2 and CSS3.

Answer: The differences between CSS2 and CSS3 are as follows:

Answer: There are three types of CSS as mentioned below:

Q #5) Why is the external style sheet useful?

So, if we do any changes in that external file, then the changes can also be observed on the webpage. Thus we can say that it is very useful and it makes your work easy while working on larger files.

Q #6) What are the uses of an embedded style sheet?

Answer: Embedded style sheet gives us the privilege to define styles in one place in an HTML document.

We can generate multiple classes using an embedded style sheet to use on multiple tag types of a web page and also there is no extra downloading required for importing the information.

Answer: By using the CSS selector, we can choose the content which we want to style so that we can say that it is a bridge between the style sheet and the HTML files.

The syntax for CSS selector is “select” HTML elements created on their id, class, type, etc.

Q #8) Explain the concept of Tweening.

Answer: Tweening is the process in which we create intermediate frames between two images to get the appearance of the first image which develops into the second image.

It is mainly used for creating animation.

Answer: CSS image scripts are a group of images that are placed into one image. It reduces the load time and request number to the server while projecting multiple images into a single web page.

Answer: It is a method in which we design and develop a web page according to the user activities and conditions which are based on various components like the size of the screen, portability of the web page on the different devices, etc. It is done by using different flexible layouts and grids.

Answer: CSS counters are variables that can be incremented by rules of CSS that inspector track how many times the variable has been used.

Answer: CSS specificity is a score or rank that decides which style declaration has to be used to an element. (*) this universal selector has low specificity while ID selectors have high specificity.

There are four categories in CSS which authorize the specificity level of the selector.

Q #13) How can we calculate specificity?

Answer: We can make a rounded corner by using the property “border-radius”. We can apply this property to any element. 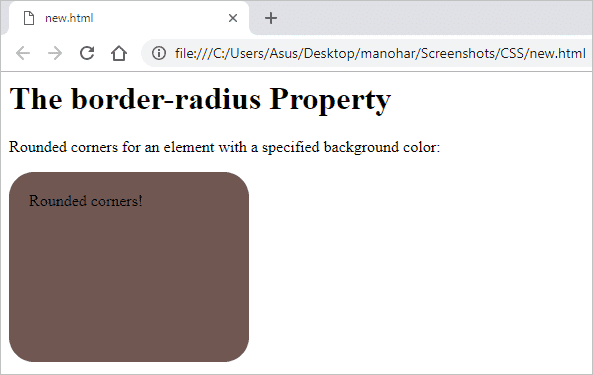 Q #15) How will you add border images to an HTML element?

Answer: We can set the image to be used as the border-image alongside an element by using the property of CSS “border-image”.

Answer: It is a property of CSS which allows you to display a smooth transformation between two or more than two specified colors.

There are two types of gradients that are present in CSS. They are:

Answer: It allows you to design a flexible responsive layout structure without using any float or positioning property of CSS. To use CSS flexbox you need to define a flex container initially.

Q #18) Write all the properties of the flexbox.

Answer: There are several properties of the flexbox that are used in the HTML webpage.

Q #19) How to align image vertically in a division that spans vertically on the whole webpage?

Q #20) What is the difference between padding and margin?

Answer: In CSS, the margin is the property by which we can create space around elements. We can even create space to the exterior defined borders.

In CSS, we have margin property as follows:

Margin property has some defined values as shown below.

In CSS, padding is the property by which we can generate space around an element’s content as well as inside any known border.

Negative values are not allowed in padding.

Answer: In CSS, the box model is a box that binds all the HTML elements and it includes features like margins, border, padding, and the actual content.

By using a box model we will get the authority to add the borders all around the elements and we can also define the space between the elements.

Answer: We can add icons to the HTML webpage by using an icon library like font-awesome.

We have to add the name of the given icon class to any inline HTML element. (<i> or <span>) . Icons in the icon libraries are scalable vectors that can be customized with CSS.

Answer: It is a class that is used to define a special state of an HTML element.

This class can be used by styling an element when a user snooped over it and also it can style an HTML element when it gets the focus.

Q #24) Explain the concept of pseudo-elements in CSS.

Answer: It is a feature of CSS which is used to style the given parts of an element.

For Example, we can style the first letter or line of an HTML element.

Answer: It is the property that elaborates on the transparency of an element.

Q #26) Write all the position states used in CSS.

Answer: In CSS, there are four position states as stated below:

Answer: By using navigation bars we can make an ordinary HTML page into a user-specific and more dynamic web page. Basically, it is a list of links, hence use of <ul> and <li> elements makes the perfect sense.

Q #28) What are the differences between relative and absolute in CSS?

Answer: The main difference between relative and absolute is that “relative” is used for the same tag in CSS and it means that if we write the left:10px then the padding will shift to 10px in the left while absolute is totally relative to the non-static parent.

It means, if we write left:10px then the result will be 10px far from the left edge of the parent element.

Answer: Important declarations are defined as that declaration which is having more importance than the normal declaration.

While executing, these declarations override the declaration which is having less importance.

In this body, background has more weight than the color.

Q #30) Define different cascading methods that can be used inside the cascading order.

a) Sort by origin: There are some rules which can provide an alternate way defined as:

c) Sort by order specified: This comes in the scenario when the two selectors are of same weight and the other properties than the specification which will be seen for overriding.

All other styles will be seen overridden if the style attribute is used for inline style.

And also, if the link element is used for external style, then it will override the imported style.

Q #32) How is the concept of inheritance applied in CSS?

Answer: Inheritance is a concept in which the child class will inherit the properties of its parent class. It is a concept which is been used in many languages and is the easy way of defining the same property again.

It is used in CSS to define the hierarchy from the top level to the bottom level. Inherited properties can be overridden by the children’s class if the child uses the same name.

And another definition is being defined in the child class

All the paragraph text will be displayed using the property and will be defined in the body except for the H1 style which will show the text in font 18 only.

Q #33) Differentiate between the ID and class.

Answer: Both ID and class is been used in HTML and assigns the value from CSS.

Please find below the differences:

This interview question and answer list will help you to crack the Web developer interview for fresher as well as experience level. These are the frequent questions asked in the interview.

Hope this article will help to crack and face any interview related to CSS for a Web developer.

We wish you all the success!!