In our previous tutorial, we learned Private, Static and Void methods Of Mocking. Read through the complete training tutorials on Mockito for a clear understanding of the Mockito framework.

This article covers the most commonly asked typical interview questions on the Mockito Mocking framework.

Every developer or QA is expected to know Mocking basics in order to write the most white box tests (or unit tests) with ease and to mock the dependencies for enhanced code coverage and greater confidence in the application. 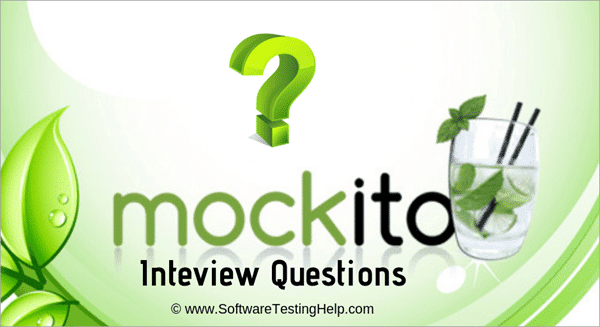 Enlisted below are the most commonly asked questions on Mocking Frameworks.

Answer: There are a lot of use cases of mocking that aid in unit testing of the code under isolation and make the test highly repeatable and predictable.

Mocking is generally required when :

a) The component under test has dependencies that are not yet implemented or the implementation is in progress.

A good example can be a REST API endpoint which will be available later at some point in time, but you have consumed it in the code via a dependency.

Now as the real implementation is still not available,  you really know most of the time what is the expected response of that API. Mocks allow you to test those kinds of integration.

b) Component updates the state in the system.

Example: DB calls – you would not want to update your DB with data that is just for testing purposes. This might result in corrupting the data, moreover, the availability of DB is another challenge when the test is executed.

So how do both of these differ?

a) The thenReturn way of stubbing is a type-safe way of setting up stubs. What this essentially means is that it does a compile-time check against the return types that you want to stub too.

Let’s understand this with an example:

// with doReturn,  both the stub setup works as it’s not compile safe.

// here we are trying to return an object of type double which still works and does not throw any compile time warning.

b) Another important difference between these 2 ways to the stub is for Mocked objects, apart from compile safety there is not much difference.

However for Spied objects, “thenReturn” kind of stub setup will not work, as it will result in calling the real method before the stubbed response is return as the call and not on a Mock, but on Spy which is wrapping a real object instance.

So suppose, there is a spy named spiedObject and it has a method testMethod which returns an integer, then to setup a stub on this you will need to use doReturn instead of thenReturn.

Answer: Spy is a type of partial mock supported by Mockito.

This essentially means is a type of instance where:

b) It gives you the flexibility to set up partial mocks.

For Example, if you have an object with 2 methods – method1 and method2 and you want method1 to be called and method2 to be mocked. Spies provide this kind of setup.

So, the difference between a mock and a stub in simple terms is – a mock is created from a type and not from an instance whereas a stub wraps an actual instance of the class object.

Static methods are more like procedural code and are mostly used in legacy systems in general.

Mock libraries typically create mocks by dynamical instance creation at runtime, either through interfaces or through inheritance and as the static method is not associated with any particular instance it’s not possible for mocking frameworks (like mockito, easy mock, etc) to mock Static methods.

Frameworks like PowerMock which do have support for static methods perform bytecode manipulation at runtime in order to mock static methods.

Q #5) What’s the need to verify that the mock was called?

Answer: Setting up a stub on a mocked object (or a spied instance) does not guarantee whether the stubbed setup was even invoked.

“verification” matchers, give a facility to validate whether the stub that was set up was actually invoked or not, how many times was the call made, what arguments were the stubbed method called with, etc.

In essence, it allows us to verify the test setup and expected outcome in a more robust manner.

Few points about testable code (meaning which could be easily unit tested) include:

Q #7) What are the limitations of Mockito?

Answer: Mockito is a framework of choice for most of the java based projects. It is easy to implement, read and understand.

Some of the drawbacks or limitations in terms of functionality are:

Q #8) Which frameworks can support mocking Private and Static methods?

Answer: With Java 8’s implementation of default methods in Interface, Mockito provides out of box support to mock such default methods. (Please note that this support was introduced from Mockito 2 onwards).

These methods can be mocked/stubbed like any other methods of a class or interface.

Q #10) How can order of stub invocations be verified in Mockito?

Answer: When you want to verify the order in which mocks were called, Mockito’s “InOrder” interface can be used.

During the test, you simply have to setup / create an Inorder object, listing down a list of mock objects on which the order of mocks needs to be ascertained (if there are multiple methods on the same mock and there is no other mock that needs to be verified then it’s sufficient to mention the mocked class only once).

Also, for reference, listing down the code of method under test will be helpful to understand the order of test execution:

So, if you are writing a unit test using Mockito, for this and you need to ensure the order of the calls on databaseImpl, refer to the test code and ensure that the asserts are made as per the expected order.

In the above example if I change the order of asserts, then it will cause the test to fail with an exception of “VerificationInOrderFailure”.

After changing the assert order, the code looks as shown below:

The above test execution throws an exception with type:

Answer: To return different values for multiple invocations of the same stubbed method, Mockito provides 3 approaches as given below:

a) Using comma separated: This works with thenReturn.

For Example, taking the above code sample, let us try to setup consecutive stub for method – getGrade which will return different values depending on the sequence of iterations:

b) Consecutive thenReturn: This is an approach that is chained with thenReturn statements. Applying chained calls to the same example will look as shown below.

c) Consecutive doReturn: The last approach is using doReturn in the chained format as above.

Q #12) What are the different types of mocking frameworks and how do they work?

Answer: Types of the Mocking framework and how do they work are explained below.

There are broadly 2 categories of mocking frameworks:

Let’s compare both these frameworks on different parameters.

In addition to getting a theoretical understanding of the questions covered, one should also try doing real code examples which makes learning these frameworks more fun and interesting.

Hope, you enjoyed the entire range of tutorials in this Mockito series.