In this technological era, there is a huge demand for Android Application developers and it is one of the highly paid jobs too.

Hence many tech-savvy people are trying to make their way into this career. There are several tricky interview questions that are asked in many MNC’s and some small scale companies. And this article includes a set of such Android interview questions and answers that will be helpful to millions of job seekers. 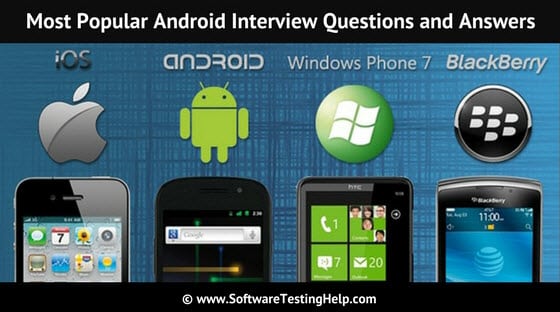 This article includes a set of most commonly asked android interview questions and answers covering almost all the important concepts in simple terms in order to enable any job seeker to clear the interview successfully.

Answer: Android is an open-source operating system and is mainly popular for Smartphones and Tablets.

This operating system is Linux Kernel-based. Using the Android operating system, the developer develops the functions or programs which can perform basic as well as the advanced type of operations on the Smartphone.

Answer: To develop a mobile application, Android developers require some tools and this requirement is satisfied by “Android SDK” which is a set of tools that are used for developing or writing apps.

It has a Graphical User Interface that emulates the Android environment. This emulator acts like an actual mobile device on which the developers write their code and then debug/test the same code to check if anything is wrong.

Q #3) What are the different versions of Android OS that you remember?

Answer: Given below are the various versions of Android.

Q #4) What is the difference between Mobile Application Testing and Mobile Testing?

Answer: Mobile app testing is the testing of applications on a device which mainly focuses on functions and features of the application.

And Mobile Testing is the testing of the actual mobile device and focuses on mobile features like Call, SMS, Contacts, Media Player, inbuilt browsers, etc.

Answer: Java is the widely used language for Android development. It also supports C/C++ and when used with Android SDK, it improves the performance speed too.

Q #6) What are the advantages of the Android Operating System?

Answer: It is open-source and platform-independent. It supports various technologies like Bluetooth, Wi-Fi, etc

Answer: Android architecture is in the form of software stack components.

The below diagram describes the different layers in the Android architecture. 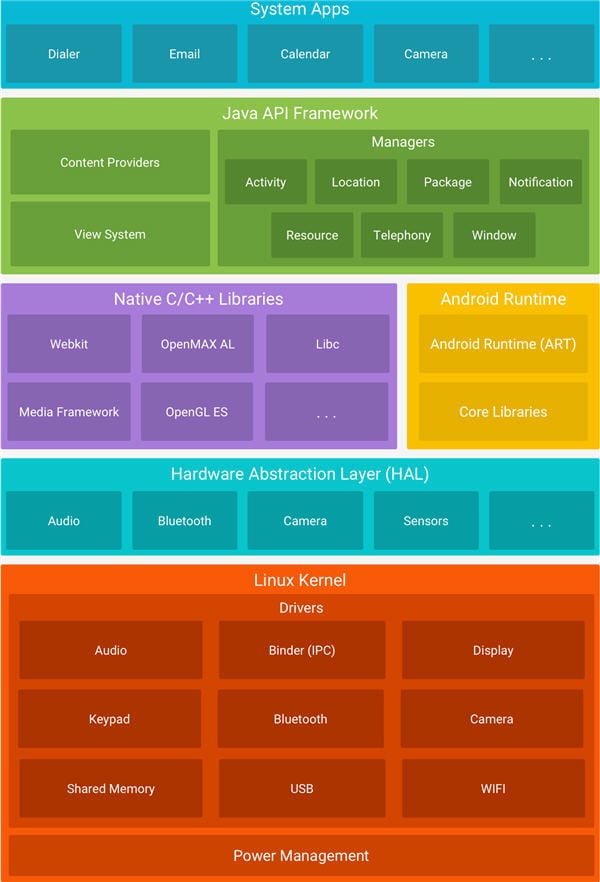 Answer: Android framework is a set of API’s using which the Android developers write code for the mobile apps. It contains the methods and classes to write the programming code.

Android framework includes a different set of tools to create image pane, text field, buttons, etc. It also includes “Activities” with which the user interacts and “Services”, which are the programs that run in the background. It is a package of different components like Intents, Broadcast Receivers, Content Providers, etc.

Q #9) Which components are necessary for a New Android project?

Answer: Whenever a new Android project is created, the below components are required:

The below image shows the Project View once an Android project is created:

Answer: The core components of Android operating systems are:

Q #11) Explain briefly – what is meant by Activities?

Answer: Activities are the part of the mobile app which the user can see and interact with.

For Example, if you open an SMS app which has multiple activities like create new SMS, add a contact from the address book, write the content in the SMS body, send SMS to the selected contact, etc.

Activity keeps a track of the following:

An activity is implemented as a subclass of Activity class as shown below:

Answer: Service is an Android component that runs in the background and acts independently. It does not provide any user interface.

Though the services are running behind the scene, a user can continue their work on different apps. Most of the time, the users are not aware of the services which are running in the background. These services allow the system to kill the process without interrupting the user’s ongoing work.

A service is implemented as a subclass of Service class:

Answer: When a user interacts with the app and moves here and there, out of the app, returns to the app, etc. During all this process “Activity” instances also move in the different stages in their lifecycle.

There are seven different states  like – onCreate(), onStart(), onRestart(), onResume(), onPause(), onStop(), and onDestroy(). These are termed as a ‘callback’. Android system invokes these callbacks to know that the state has been changed. 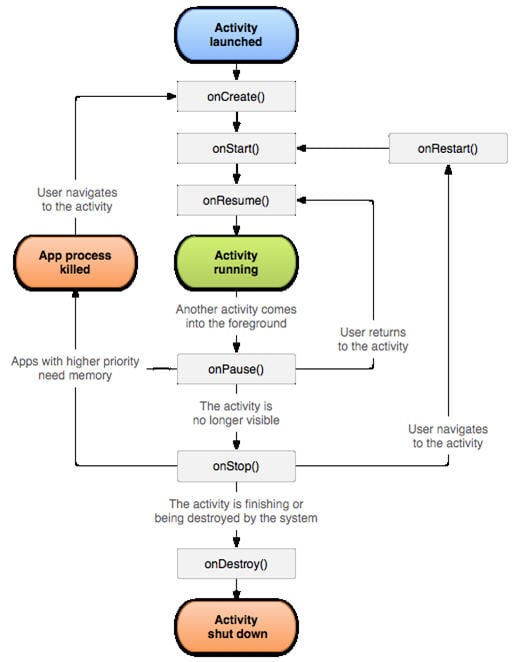 When a user is working on an app, then there are many activities involved in it like Open, Close, Save, Delete, Send, etc.

Answer: Android has an Intent class when the user has to navigate from one activity to another. Intent displays notifications from the device to the user and then the user can respond to the notification if required.

Given below are the two types:

Q #16) What is the importance of setting up permission in app development?

Answer: Once the permissions are set for the app development, then the data and code are restricted to the authorized users only.

If the code is kept without any restriction or if it is accessible to anyone then there are chances of compromise of code which results in defect leakage.

Answer: It is a default file format that is used by the Android Operating System. Application Package Kit (APK) is used for the installation of mobile apps. The .apk contains resource file, certificate, manifest file, and other code.

APK files are archive files in the zip format with .apk extension.

Q #18) What is the database used for the Android platform?

Answer: SQLite is the database that is used for the Android platform. It is an open-source, serverless database.

Answer: ANR stands for Application Not Responding. It is a notification or pop-up displayed by the Android platform whenever the application is performing too many functions at a time and if it is suddenly not responding for a long time to the user action.

Q #20) Which are the dialog boxes supported by the Android platform?

Answer: ActivityCreator is a batch file and shell script which was used to create a new Android project. It is now replaced by the “Create New Project” in Android SDK.

Answer: Orientation is the key feature in Smartphones nowadays. It has the ability to rotate the screen between Horizontal or Vertical mode.

Android supports two types of screen Orientations as mentioned below:

setOrientation() is a method using which you can set a screen alignments. HORIZONTAL and VERTICAL are two values that can be set in the setOrientation() method. Whenever there is a change in the display orientation i.e. from Horizontal to Vertical or vice versa then onCreate() method of the Activity gets fired.

Answer: In the Android platform, there are remote methods that facilitate the use of methods from one program to another. To create and implement the remote methods the first step is to define the communication interface in AIDL.

AIDL stands for Android Interface Definition Language. It facilitates communication between the client and the service. It also communicates the information through inter-process communication.

For communication between processes, the data is broken down into chunks which are easily understandable by the Android platform.

Q #25) What are the data types supported by AIDL?

Answer: Data Types supported by AIDL are as follows:

Q #26) Explain the AndroidManifest.xml file and why do you need this?

Answer: Every application must have an AndroidManifest.xml file in the root directory. It contains information about your app and provides the same to the Android system.

The information includes the package name, Android components such as Activity, Services, Broadcast Receivers, Content Providers, etc. Every Android system must have this information before running any app code.

Answer: There are many mobile devices available in the market with different operating systems.

Specifically, I have worked on Android, Windows, Symbian, iPhone, etc

Q #28) Which tools are used for debugging on the Android platform?

Answer: To understand the cause of the failure or cause of any issue, debugging is important. On the Android platform Android Monitor.bat utility is used while on the iOS platform, iPhone Configuration utility is used for debugging purposes.

There are different tools for debugging which include: Android DDMS, Android Debug Bridge, iOS simulator, Debugging from Eclipse with ADT, Remote debugging on Android with Chrome, etc.

Q #29) Which scenario can test only on real devices but not on an emulator?

But there are few scenarios that cannot be tested using emulator, these can be tested only using real devices. These scenarios are interrupted scenarios i.e. message, phone call interruption while using the app, low battery, Bluetooth, memory card mount and unmount, etc.

Q #30) Name the mobile automation tools that are available in the market.

Answer: There are quite a few mobile automation testing tools that are available in the market but these are used only if the project requires it and if the application supports the automation.

Q #31) How do you troubleshoot the android application which is crashing frequently?

Answer: Given below are the few steps that we need to follow while troubleshooting the crashing issue:

Q #32) How do you find memory leaks in the mobile app on the Android platform?

Answer: Android Studio is using Android Device Manager (ADM), this ADM is used to detect the memory leaks in the Android platform.

When you open ADM in the Android Studio then on the left-hand side of the ADM, you will find your device or emulator in which a heap sign will be displayed. When you are running any mobile app then you will see the heap size, memory analysis and other statistics displayed on it.

It has wide debugging features which include:

DDMS is integrated with the Android studio. To launch the DDMS, you need to open the Android Device Monitor (ADM) first and then click on the DDMS menu button. Once DDMS is launched, then on the left-hand side the list of connected devices is displayed along with the processes which are running on each device.

With the help of DDMS, you can debug both on real devices and emulators.

Q #34) What are the different data storage options available on the Android platform?

Answer: Android platform provides a wide range of data storage options. These options must be used based on the need such as data is secure and used with permission only or can be accessed publicly.

Below is the list of data storage options on the Android platform:

Answer: Android-enabled devices have built-in sensors that measure orientation, motion, and other conditions.

These sensors provide data with high accuracy, which will help to monitor the positioning and movement of the device. Some of the sensors are hardware-based and few are software-based.

There are three categories of sensors as mentioned below:

There are four types of Java Classes as shown below:

Almost all the important Android interview questions and answers have been covered here in this article. I hope that this would have been very useful to you.

I’m sure that you can crack any android interview successfully with a thorough knowledge of all these questions.

I hope you are ready for an interview!! Wish you all success!!