Difference Between Linux and Windows Operating Systems In Terms of Architecture, Performance, And Security:

Both Linux and Windows are the well known operating systems.

When we talk about comparing these two, we should first understand what an operating system is and then get to know the basics of Linux and Windows before starting with the comparison between them. 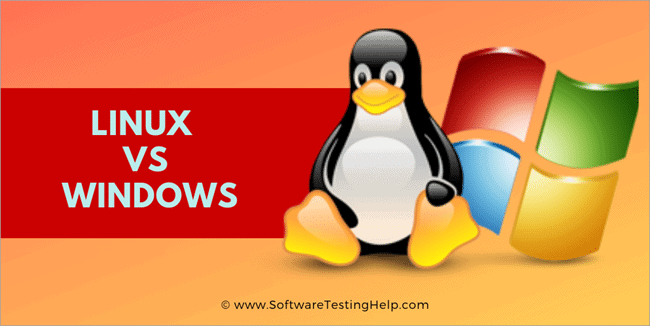 It acts as an interface between computer hardware and software. An operating system is the most crucial part of a computer system. Without an OS, any computer or mobile device can’t work at all!

There are several operating systems that are available in the market. In the world of desktop, the most dominant OS is the Microsoft Windows which enjoys a market share of approx. 83%. Following that, we have macOS by Apple Inc and Linux in the second and third place respectively.

In the mobile sector, which comprises of both tablets and smartphones, the two most dominant operating systems are Google’s Android and Apple’s iOS. Talking about servers and supercomputers sector, Linux distributions take the lead here.

Microsoft Windows is a group of many GUI based operating systems developed and offered by Microsoft. It mainly targets the personal computing market.

Linux is a group of Unix-like operating systems based on the Linux kernel. It belongs to the family of free and open source software. It is usually packaged in a Linux distribution. Linux was first released in the year 1991. It is most commonly used for servers, however, a desktop version of Linux is also available.

Worth Reading => Unix vs Linux – Know the Differences

Debian, Fedora, and Ubuntu are popular Linux distributions. We do have RedHat Enterprise Linux and SUSE Linux Enterprise Server (SLES) that are available as commercial distributions of Linux. As it is freely redistributable, anyone can modify and create variations of source code.

Suggested reading =>> Ubuntu vs Windows- Which is better? 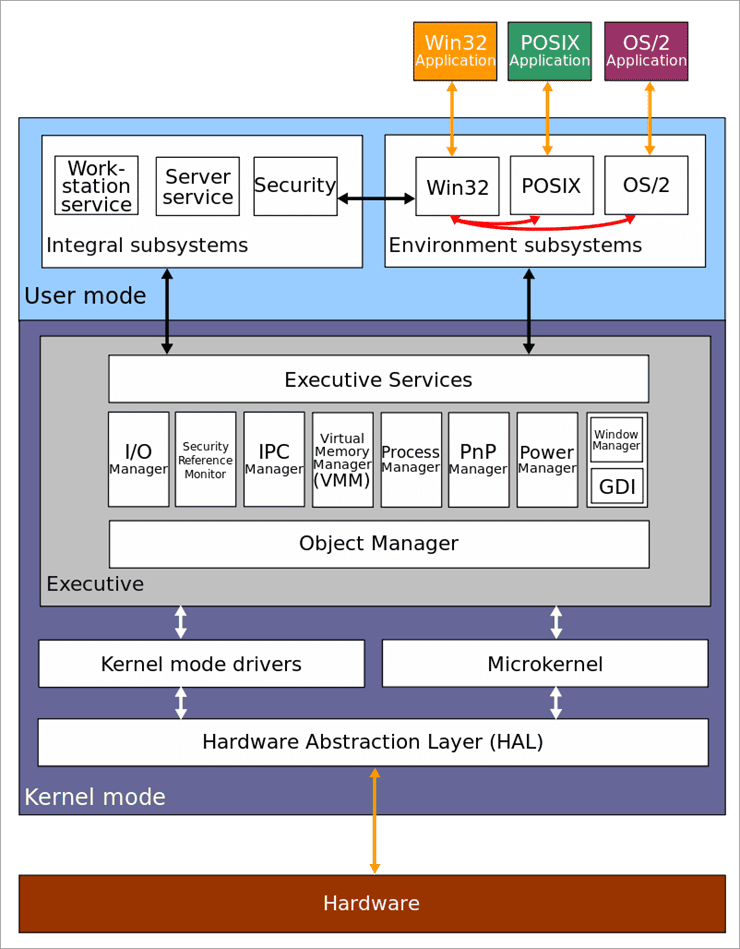 Each layer is further comprised of various modules.

Kernel mode has complete access to hardware and computer system resources. It executes the code in a protected memory area. It consists of Executive, microkernel, kernel mode drivers and hardware abstraction layer (HAL).

The microkernel lies between windows executive and HAL. It is responsible for multi-processor synchronization, thread scheduling, interrupt & exception dispatching, trap handling, initializing device drivers and interfacing with the process manager.

The kernel mode device drivers enable windows to interact with hardware devices. HAL is a layer between the computer hardware and operating system. It is responsible for controlling I/O interfaces, interrupt controllers and various processors. 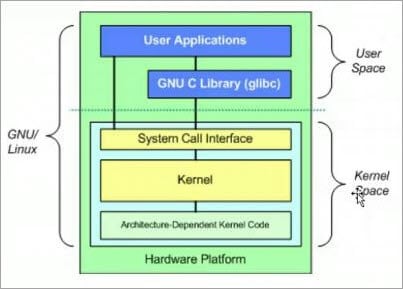 As we can see in the above figure, Linux Architecture also has two layers i.e. user space and kernel space. Within these layers, there are four main components i.e. Hardware, kernel, System call interface (aka Shell) and User applications or utilities.

The hardware is comprised of all the peripheral devices which are attached to the computer such as terminals, printer, CPU, RAM. Now comes the monolithic Kernel which is the core of the OS.

The Linux kernel has many subsystems and other components too. It is responsible for a lot of critical tasks like process control, networking, accessing peripherals and file system, security management and memory management. 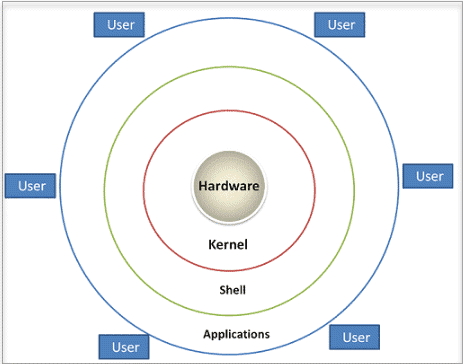 The shell acts as an interface between the user and kernel and presents the services of the kernel. There are around 380 system calls. For Example, start, read, open, close, exit, etc. Shell receives commands from the user and executes the kernel’s functions.

Shell is classified into two categories i.e. command line shells and graphical shells. In the outermost layer of the architecture, and we have applications which execute on the shell. It can be any utility program like a web browser, video player, etc.

Differences Between Linux and Windows

Linux vs Windows has been a subject of argumentation since the inception of these two Os. Let us an in-depth look into how Windows and Linux are different from each other. 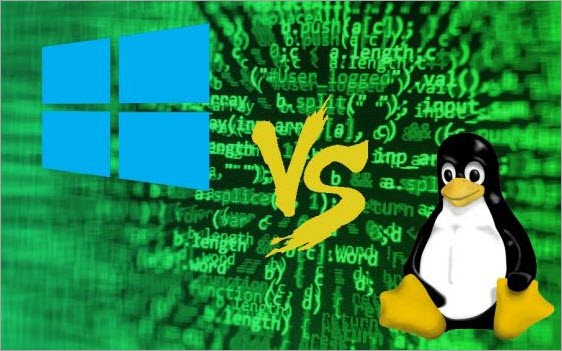 The below table will brief you all the differences between Linux and Windows.

While talking about security, though Linux is open source, however, it is very difficult to break through and hence it is a highly secure OS when compared to the other operating systems. Its high-tech security is one of the main reasons for Linux popularity and enormous use.

Meanwhile, Linux is open source and has a strong user community. As the entire user base has access to the source code, they can monitor for issues and there are high chances for any vulnerability to be caught earlier than the hackers target it.

Moreover, Linux users will investigate and fix the issue then and there as it is open source. This way, Linux receives a great level of maintenance from its community of developers.

On contrary to this, Windows users can’t fix the issue by themselves as they don’t have the permission to modify the source code. If they catch any vulnerability in the system, then they will need to report it to Microsoft and then wait for it to get fixed.

In Windows, the users have full admin access over the accounts. Thus, when a virus attacks the system, it quickly corrupts the whole system. So, everything is at risk in case of Windows.

On the other hand, Linux enjoys the perk of accounts where limited access is given to the users and hence in case of any virus attacks, only a part of the system will be damaged. The virus won’t be able to affect the whole system as Linux does not run as root by default.

In Windows, we do have a UAC (user account control) mechanism to control the access privileges, though it is not as robust as Linux.

Linux uses IP tables to boost up the security of the system. Iptables help in controlling the network traffic by configuring certain rules enforced through the Linux kernel firewall. This aids in creating a more secure environment for running any command or access to the network.

Linux has segmented working environments which secure it from the attack of virus. However, Windows OS is not much segmented and thus it is more vulnerable to threats.

Another significant reason for Linux being more secure is that Linux has very few users when compared to Windows. Linux has nearly 3% of the market whereas Windows captures more than 80% of the market.

Thus, hackers are always more interested in targeting Windows as the virus or malicious software they create will affect a large segment of users. This, in turn, keeps Linux users safer.

In a nutshell, we can say that Linux has some features which make it more secure than Windows and the other operating systems.

The fact that a majority of the fastest supercomputers of the world that run on Linux can be attributed to its speed. Linux has a reputation for being fast and smooth while Windows 10 is known to become slow and slow over time.

Linux runs faster than Windows 8.1 and Windows 10 along with a modern desktop environment and qualities of the operating system while windows are slow on older hardware.

Why is Linux Faster than Windows?

There are many reasons for Linux being generally faster than windows. Firstly, Linux is very lightweight while Windows is fatty. In windows, a lot of programs run in the background and they eat up the RAM.

Secondly, in Linux, the file system is very much organized. Files are located in chunks which are very close to each other. This makes the read-write operations very fast. On the other hand, Windows is dumpster and files are present all over the place.

No doubt that Windows 10 is a prettier and safer version of windows when compared to its earlier versions. Windows 10 came up with some new distinctive features like its digital assistant Cortana, Microsoft edge browser, Microsoft office with 3D features.

It also has the ability to execute Linux bash commands. We also have virtual workspaces in Windows 10 which permit its users to execute applications on various desktops.

In comparison, it was found that Linux was using 373 megabytes of RAM and Windows was using 1.3 gigabytes which is around 1000 megabytes more than Linux. This comparison was done on a brand-new installation when no app was open.

Thus, Windows 10 is resource heavy than Linux Mint 19. Also, the updates in Windows 10 are a kind of linear in nature and slower than Linux updates. In Linux, we get updates in packages and they are fast as well.

Still, Linux beats windows 10 when it comes to speed. Talking about the look and feel, Windows UI is very pretty and offers a lot of applications. Linux UI is quite simple and clean. However, you will find alternates of Windows applications in Linux too.

Coming to Gaming, it’s difficult to do in Linux Mint and also it does not offer many games when compared to Windows 10. Thus, Gaming is a drawback on Linux.

In this article, we have explored almost all the differences between Linux and Windows OS.

So, Which one do you think is the best operating system?

In my opinion, no OS is better than the other. However, both are unique and serve their best to specific user requirements and market needs. Both the OS have different marketing target.

Linux offers great speed and security, on the other hand, Windows offers great ease of use, so that even non-tech-savvy people can work easily on personal computers.

Linux is employed by many corporate organizations as servers and OS for security purpose while Windows is mostly employed by business users and gamers. Talking about cost, there are a lot of factors into the picture when we compare the cost of these two OS.

We can’t make a gross generalization that Linux is totally free or cheaper than Windows. Linux’s license cost is zero, but we do have infrastructure cost, software support cost and IT staffing cost for both Windows and Linux.

Hope this article would have brushed your knowledge about the pros and cons of Linux vs Windows Operating Systems. We hope you would be clear now to decide which OS to go with as per your needs, skills, and budget.