If you are preparing for an Oracle developer role interview then you must be well versed with Oracle Forms and Reports.

Reviewing these interview questions will help you to crack any interview and hence this article is strongly recommended for the job seekers. 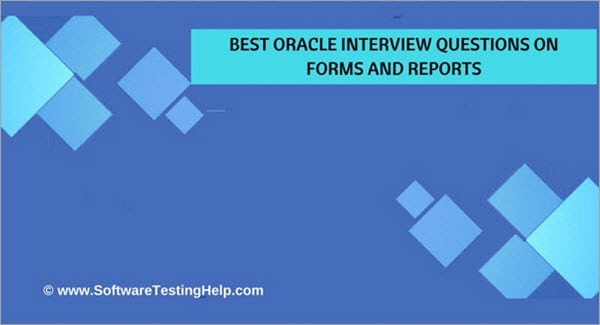 Q #1) What do you understand by Oracle Forms and why are they required?

Answer: Oracle Forms are the user interfaces that are developed to present the data to the user. This data can be presented once retrieved from the Oracle database. If required, forms can be integrated with web services or Java to follow SOA architecture. Forms are created at source as .fmb files and later compiled into .fmx (executable file).

Answer: Oracle Form Services is a three-tier application and hence it will interact at the below levels:

At the client level, HTTP requests will be sent by a client to the system. This request will be received by the Forms Listener Servlet at the server and it will initiate Forms Runtime process. This process will send the request to the database to retrieve the information and send it back to the client.

This completes the workflow of user interaction through Oracle Forms Services.

Q #3) Can we invoke one form from another in a multi-forms application?

Answer: Yes, we can invoke one form from another with the help of the below built-in functions:

Q #4) What do you understand by LOV and how can it be used?

Answer: LOV is a list of values populated in a pop-up window and is displayed to the end-user for selection. These values can be assigned and invoked statically or dynamically in LOV.

There is a related property known as ‘LOV for Validation’ which is used to validate contents of LOV. If this property is set to true, the current value of text item is compared with the values displayed in the first column of LOV.

Answer: Canvas is a layer within a window where the visual objects like interface items or graphics can be placed.

Oracle Forms support four types of canvas as mentioned below:

Q #6) In what sequence do triggers get fired by Oracle Forms?

Answer: Oracle Forms follow the below hierarchy for trigger execution:

Q #7) Explain the Master-Detail relationship with some examples.

Answer: Master-Detail relationship is the relationship among different business entities which follows the parent-child relationship pattern. There will be one parent entity linked to many child entities.

For Example, we can have one master named COMPANY with different details as DEPARTMENTS (HR, FINANCE, OPERATIONS, ADMIN, etc.).

This relationship can be implemented with the help of two data blocks where the first data block represents the master table while the other represents a detailed table.

Q #8) Name the different triggers associated with Oracle Forms having a master-detail relationship.

Answer: Enlisted triggers gets created during the creation of the master-detail block:

Q #9) What are the various configuration files that are used by Oracle Forms?

Answer: The configuration files include:

Using the above config files, a user can specify different parameters for the forms as per the requirement.

Q #10) What do we mean by record group in Oracle Forms?

Answer: A record group is a framework of rows and columns within the Oracle Forms similar to a table in the Oracle database.

Record groups can be:

The static record group is again not associated with any query and can be created or updated during the design phase only.

Q #11) What is an Oracle Report? List its various types.

Answer: Oracle Report is a tool provided by Oracle Fusion Middleware, which is used to generate reports based on the data stored in the Oracle database. It consists of Oracle Reports Developer, a report designing tool and Oracle Application Server Reports Services.

Various types of Report include:

Answer: Listed below are the triggers supported by Oracle Reports:

Q #14) What is the difference between bind and lexical parameter?

Answer: Bind parameters are the variables, which can replace a single value in SQL/PLSQL such as number, character, string or date.

While lexical parameter can replace clauses or multiple values embedded in SELECT query possibly after SELECT, FROM, WHERE, GROUP BY, ORDER BY, HAVING, CONNECT BY, and START WITH.

Q #15) List the different types of columns in Oracle Reports.

Answer: There are three types of columns in Oracle reports. They are:

Q #16) What is a User exit program in Oracle Reports?

Answer: User exit is a program that is written to perform some relevant action. They can be called from report triggers and once executed, it gives back the control to Report Builder.

Few of the user exits are listed as shown below:

Q #17) How can we generate report output in Excel format?

Answer: To get report data in an Excel format, we can use:

Q #18) What is the difference between flex mode and confined mode?

Q #19) What is a matrix report and how many minimum groups are required to prepare the same?

Answer: A matrix is a kind of report that looks like an information grid with one row of labels and one column of columns. At least 4 groups are required in the data model to prepare a matrix report. One should be a cross-product group, one cell group & at least two groups should be within a cross-product group.

Q #20) Is it possible to have multiple layouts in a report?

Answer: Yes, it is possible to have multiple layouts. We can use an additional layout option in the layout editor tool.

I hope the above article will help you to prepare for your interview and increase your knowledge of the concept of Oracle Forms and Reports.