In this tutorial, we have presented the Most Frequently Asked Maven Interview Questions and Answers for Beginners and Experienced Candidates:

As with all interviews, the candidates must prepare to answer the most commonly asked interview questions on Maven. This tutorial will definitely help you prepare for your upcoming interview. 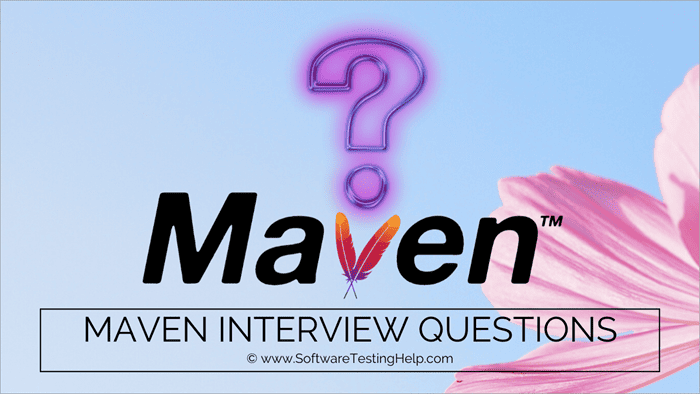 Answer: Maven is a project management tool (introduced by Apache Software Foundation) that provides an entire framework for the build cycle. It is open-source and is mainly used for the project developed in Java.

Maven is driven by a project object model popularly known as POM. It is the central repository for all the dependencies. It maintains the same folder convention across organizations and can be easily integrated with continuous integration tools like Jenkins.

Besides, it takes care of the reporting and documentation of the project. It is developed in Java language.

Q #2) What are the features or advantages of Maven?

The features or advantages of Maven are as follows:

Q #3) Name the aspects that are managed by Maven.

Answer: The aspects that are managed by Maven are documentation, builds, SCMs, releases, distribution, mailing lists, dependencies, and reporting.

Q #4) What is meant by Maven build lifecycle? Name these cycles.

Answer: A Maven build life cycle comprises of certain phases. It determines the order in which the Maven goals need to be performed. If a particular phase is to be accomplished, then all the previous phases prior to that particular phase need to be run successfully in sequence.

Maven build life cycles are listed below as the followings:

Q #5) What is a build tool responsible for?

Answer: Build tools are primarily responsible for producing the source code (provided the auto-generated code is utilized). It creates project documentation from the source code.

It compiles and packages the code in the form of JAR/ZIP file. Finally, places that code in the local, central, or remote repository.

Q #6) What do you mean by POM and what does it contain?

Answer: Project Object Model or pom forms the elementary part of the working of Maven. While performing a Maven goal or a task, the pom file residing in the present directory is searched and referred to collect information on the project.

It is basically an xml file. It contains configuration details like plugins, goals, developers, dependencies, profiles, versions, and mailing lists. 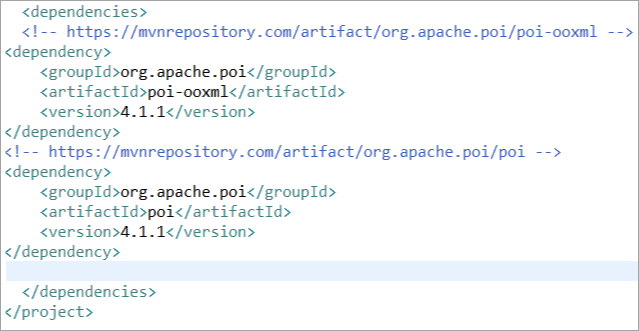 Q #7) What do you mean by a Maven Repository?

Answer: Maven repository is the location of a directory where all the related project artifacts, jars, libraries, plugins are kept and can be utilized by Maven easily.

Answer: There are three types of Maven repositories.

Answer: Maven artifact is known as a file (generally a jar) that is extended to the Maven repository. Maven build generates multiple artifacts comprising of source jar and compiled jar. GroupId, artifactId, and version together form an artifact and all of the three combined solely identifies it.

The below code snippet shows an example of the Maven artifact.

Q #10) List down the various scopes of Maven Dependency.

The various scopes of Maven dependency include:

Q #11) What are the differences between Maven and Ant?

Answer: The differences between Maven and Ant are listed below:

Answer: Maven archetype is basically a plugin assigned with the job of generating the project structure according to a particular skeleton or template.

The following command is used to create a project template:

Q #13) How to determine the version of Maven in our system?

Answer: To determine the version of Maven we are using in our system, we need to enter the below command in the console.

Answer: Maven snapshot is that version which is still unreleased. Prior to the first release is completed, there is a 1.0-SNAPSHOT version. In the future, this version will emerge to be 1.0 version. It is called as the present development copy. Maven looks for the new SNAPSHOT version in the remote repository.

Q #15) How to mention profiles in Maven?

Answer: The profiles are mentioned in Maven with the help of a subset of elements present in the pom file.

Answer: Maven plugins are the basic component of a Maven framework. Each of the plugins has a specific task to be performed.

Maven plugin gives a group of goals that can be run with the following command syntax:

Q #17) What are the different types of Maven Plugins?

The different types of Maven plugins are listed below:

Answer: A collection of Maven goals constitute a phase. Each goal is defined for a particular job involved in project management and execution of the build.

Answer: The build phases in Maven Build Lifecycle are listed down:

Q #20) What is the location where Maven dependencies are downloaded?

Q #21) Name the phases of the Maven Clean Lifecycle.

The phases of Maven Clean Lifecycle are listed below:

Q #22) What is the purpose of command mvn clean in Maven?

Answer: mvn clean aims to clean the project artifacts created by the previous Maven builds from the target directories. This is generally executed before initiating a new build process.

Q #23) What do you mean by Build profiles in Maven?

Answer: Build profile is a collection of configurations that helps to place a value or overrule the default values required for the build process in Maven.

We can design the build process for various environments like development, testing, and production. Profiles are described in the pom files with the help of <profiles> and is usually used to point to different environments.

Q #24) List down the types of Maven Build profiles.

The types of Maven Build profiles are listed below:

Q #25) What do you mean by Maven’s External Dependencies?

Q #26) What are the parameters required to define External Dependency in Maven?

Q #27) What is meant by Mojo in the terminology of Maven?

Answer: Mojo is referred to as Maven plain Old Java Object. A mojo is basically an executable goal to increase the features of Maven. A plugin is a distribution of one or multiple connected MOJOs.

Q #28) What is the job of the exclusion element in Maven?

Answer: In order to keep out any of the dependencies, the exclusion element is used in Maven.

Q #29) Why is it recommended to keep the external dependencies in the local repository rather than a remote repository in Maven?

Answer: It is recommended to keep the external dependencies in the local repository instead of remote in Maven because local repository consumes less space, are easily accessible and there is no need to take care of versioning for jars.

Answer: A forced update in Maven can be done with the following commands:

-U is used for forcing a Maven update. However, the dependencies that are release based cannot be performed in this manner.

Q #31) Explain the error “You cannot have two plugin executions with the same ( or missing) elements” in Maven.

Answer: This error message comes in the situations where we have run a single plugin more than one time with the same id. We need to give a unique id for each execution.

We are sure that most of your doubts on Maven interview questions would have been resolved by now. We have explored a wide scope of questions that are commonly asked in interviews. Practice and learn well and you will be able to grasp them easily.

We hope you enjoyed the entire range of tutorials in this exclusive Maven Series. Work Hard and Wish you all success!!