The Most Popular Perl Interview Questions with Code Examples:

Perl is one of the most powerful scripting languages in the field of computer programming with features like string manipulation, array manipulation, etc., for building various real-time applications.

This article includes a list of potential questions that can be asked to the candidates appearing for interviews in Perl Programming.

Though we do not claim these questions and answers will suffice to prepare for an interview, we are sure that it will greatly help the candidates at all levels to gain an understanding of Perl scripting language. 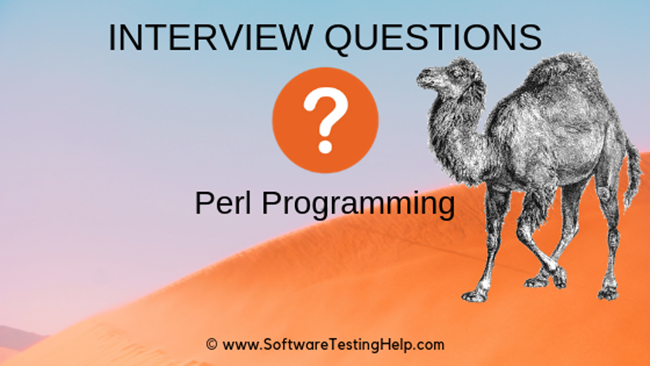 Enlisted below are the most frequently asked Perl Scripting Interview Questions that were answered by experts.

Q #1) Explain what is Perl language?

Answer: Perl stands for “Practical Extraction and Reporting Language”. It’s a powerful scripting language and is rich in features. Using Perl, we can write powerful and efficient code that can be used in mission-critical projects.

Q #2) What are the various advantages and disadvantages of Perl?

Answer: Advantages of Perl include:

The main disadvantage of Perl is that as it is an interpreted language, the execution speed is quite slow. Although it allows us to write high-level code, we cannot write complex code using Perl. Perl has too many features that can be exhaustive for a programmer to comprehend.

Q #3) What are the various uses of Perl?

Answer: Perl is used in a mission-critical project – like the defense industry. It is also used in “Rapid Prototyping”.

Answer: Enlisted below are the various Characteristics of Perl:

Q #5) Explain the execution of a program in Perl.

Answer: Perl is portable and Perl programs can be executed on any platform. Though having a Perl IDE is useful, we can even write the Perl code in a notepad and then execute the program using the command prompt.

In this code, the first line “#!/usr/bin/perl”, is the path to the Perl interpreter.

Let’s name this file as “hello.pl”. We can execute this program by just giving the following command in the command window:

Q #6) What are the various flags/arguments that can be used while executing a Perl program?

Answer: The following arguments can be used while executing a Perl program.

We can also use a combination of arguments like:

Q #7) Comment on data types and variables in Perl.

Answer: Perl variables do not have a data type. The data type of a variable in Perl is inferred from its value.

A variable in Perl can be defined as follows:

Value needs to be assigned to a variable before using it. Without this, the program may result in an unexpected output.

Answer: Variables having values with linear data types like integer, float or string are called scalar variables in Perl.

These are all scalar variables.

Q #9) Comment on the scope of variables in Perl.

Answer: By default, all the variables in Perl are global in scope. This means that a variable can be used for a reminder of the program from the point of its declaration.

You can use ‘my’ keyword for a variable and this makes a variable to have local scope.

Q #10) What are Numeric Operators in Perl?

Answer: Numeric operators in Perl are as follows:

These operators can be used to compare two strings.

Q #12) What are the different string manipulation operators in Perl?

Answer: chomp() operator removes the last character of a string and returns the number of characters removed.

chomp() operator is useful while reading input data from the console where it can be used to remove a newline (\n) character.

This will chomp the ‘\n’ character that was entered after hello.

Answer: Both list and array can be defined as a set of elements. The main difference between a list and an array in Perl is that a list is immutable i.e. it cannot be altered directly.

In Perl, a list is an array without a name. Hence, most of the times array and list are used interchangeably. An array is mutable and its contents can grow, shrink in size, etc.

Thus in order to change the contents of a list, we can store the list as an array. An array is a variable that provides dynamic storage for a list.

Arrays are declared as follows:

As each array element is a scalar element, we access each element using ‘$’ and not ‘@’.

In Perl, it is not required to specify the length of an array during the definition. Arrays grow or shrink dynamically.

For Example, in the above array if we say

An array can contain a mix of values, unlike other programming languages. For Example, the following array

This is a valid array in Perl.

Answer: Array slicing allows a user to retrieve more than one element of an array at once.

Thus we can ‘Slice’ the existing array and retrieve its elements.

This will assign a slice consisting of the first 15 elements to fortnight array.

In Perl, we can directly use external modules and packages to extend functionality. Various Database packages, protocol implementations, network packages/modules can be used or imported and used in the Perl program. These module or package files usually have a “.pm” extension.

Q #17) Explain the various functions/directives in Perl that allow you to include/import a module. Also, state the differences between them.

Answer: There are two directives which we use in Perl to include modules or packages.

For Example, we have a module named “Oracle.dbm” and we can use both the directives as follows:

Q #18) What are the various file operations in Perl. Explain with example.

Answer: Apart from reading from standard input and writing to standard output, files can also be used to read data from and write data to.

Basic operations of a file in Perl are as follows:

a) Open a file:
“open” is a library function to open a file.
open(filevar,filename);
where filevar=> like a file pointer used by Perl to refer a file
filename=>location of the file to be opened.

By default open function opens a file in ‘read’ mode.

If the file is to be opened in the write mode, then we need to precede the filename with a ‘>’ character.
open(filevar,>filename);

Similarly, if the file is to be opened in the ‘Append’ mode, then we need to precede the filename with ‘>>’ characters.

b) Read from a file:
Once the file is opened, we can read data line-by-line from the file using the following code:
$line = <filevar>;

The above line of code reads a line pointed by file var and stores that line in $line.
We can also read the contents of the file into an array variable as shown below:

c) Write/Append to a file:
We can write data to a file using the following line of code:
Print filevar(“This is to be written to file\n”);

d) Close a file:
Once reading/writing a file is over, we can close the file using the following code:
close(filevar);

Q #19) Differences between DIE and EXIT.

The above line of code will print a message “File cannot be opened” in case if open fails and then exits the program.

Answer: Subroutine is a block of code that can be reused by a program either internally or externally.

A general representation of subroutine is as follows:
sub NAME PROTOTYPE ATTRIBUTES BLOCK
Here, the sub is a keyword followed by the subroutine name NAME.
PROTOTYPE represents the parameters for a subroutine.

ATTRIBUTES give additional semantics about subroutine. Value of attribute can be either be “locked”, ”method” or “lvalue”.

BLOCK is a block of code for the subroutine.
Once subroutine is defined, we can call it using the statement,

&subroutine_name;
The ampersand(&) is optional unless we are using references that refer to a subroutine name.

Subroutines in Perl can also be called as follows:
subroutine_name();

Q #21) Demonstrate subroutines in Perl with a simple example.

Answer: Let’s take an example of a subroutine to print “Hello,World!” string.

We can call this subroutine using the following statements:

Q #22) How are parameters passed to subroutines in Perl?

Answer: In Perl, all input or actual parameters of the subroutine are stored in an array ‘@_’. In other words, array @_ is used as an alias for subroutine arguments.

Let’s demonstrate this with an example:

In this example, we are calculating the sum of elements 1 to 4. We pass these elements as a range to a subroutine. In the subroutine code, @_ that contains parameters is iterated to find the sum and then the sum is returned.

Q #23) What is the peculiarity of returning values by subroutines in Perl?

Answer: In Perl, subroutines may have an explicit return statement to return a value as

If the return statement is missing, then the subroutine implicitly returns the value of the last expression in its body.

In the above example, the subroutine sum will return the value of the variable sum ($sum) which is the last expression in its body.

Q #24) How do you set environment variables in Perl?

Answer: Perl has a special hash variable ‘%ENV’ that contains the value of all environment variables.

Hence, if I want the value of the environment variable PATH, I can say:

Similarly, if I have to set the PATH variable to a new value, then I can do it as follows:

Answer: The grep function in Perl is mainly used for Pattern matching as in other scripting languages.

The “grep” function works on a list. It evaluates an expression or a block for each element of the List. For each statement that returns true as a result of evaluating an expression, it adds that element to the list of returning values.

Look at the following code snippet:

The above code executes the “grep” command on a list and matches the pattern string (/s) to the list. The output is only the elements that are a string.

With this, we conclude this article on core Perl Interview Questions.

We hope this will help both freshers as well as experienced candidates to get an insight into Perl programming and crack the interview successfully.

We wish you all the best!!