C is a high-level structured oriented programming language used for general-purpose programming requirements. Basically, C is a collection of its library functions. It is also flexible to add user-defined functions and include those in the C library. 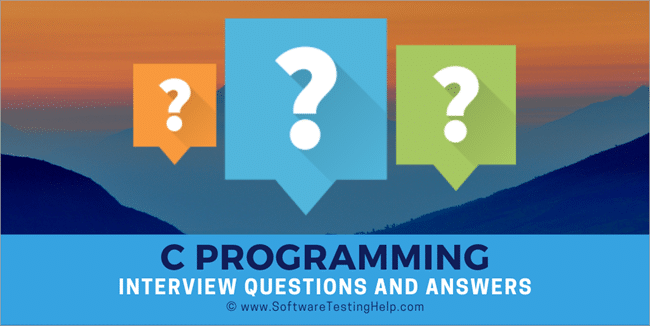 Q #1) What are the key features in the C programming language?

Answer: Features are as follows:

Q #2) What are the basic data types associated with C?

Q #3) What is the description for syntax errors?

Answer: The mistakes/errors that occur while creating a program are called syntax errors. Misspelled commands or incorrect case commands, an incorrect number of parameters in calling method /function, data type mismatches can be identified as common examples for syntax errors.

Q #4) What is the process to create increment and decrement statement in C?

Answer: There are two possible methods to perform this task.

Q #5) What are reserved words with a programming language?

Answer: The words that are a part of the standard C language library are called reserved words. Those reserved words have special meaning and it is not possible to use them for any activity other than its intended functionality.

Q #6) What is the explanation for the dangling pointer in C?

Q #8) What is the difference between abs() and fabs() functions?

Answer: Uninitialized pointers in the C code are known as Wild Pointers. They point to some arbitrary memory location and can cause bad program behavior or program crash.

Q #11) Describe the difference between = and == symbols in C programming?

‘=’ is the assignment operator which is used to assign the value of the right-hand side to the variable on the left-hand side.

Q #12) What is the explanation for prototype function in C?

Answer: Prototype function is a declaration of a function with the following information to the compiler.

In this example Name of the function is Sum, the return type is the integer data type and it accepts two integer parameters.

Q #13) What is the explanation for the cyclic nature of data types in C?

Q #14) Describe the header file and its usage in C programming?

Answer: The file containing the definitions and prototypes of the functions being used in the program are called a header file. It is also known as a library file.

Example: The header file contains commands like printf and scanf is from the stdio.h library file.

Q #15) There is a practice in coding to keep some code blocks in comment symbols than delete it when debugging. How this affects when debugging?

Answer: This concept is called commenting out and this is the way to isolate some part of the code which scans possible reason for the error. Also, this concept helps to save time because if the code is not the reason for the issue it can simply be removed from comment.

Q #16) What are the general description for loop statements and available loop types in C?

The following diagram explains a general form of a loop. 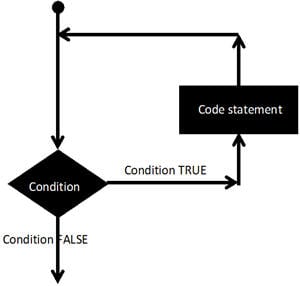 There are 4 types of loop statements in C.

Answer: A loop that runs within another loop is referred to as a nested loop. The first loop is called the Outer Loop and the inside loop is called the Inner Loop. The inner loop executes the number of times defined in an outer loop.

Q #19) What is a pointer on a pointer in C programming language?

In this example **y returns the value of the variable a.

Q #20) What are the valid places to have keyword “Break”?

Answer: The purpose of the Break keyword is to bring the control out of the code block which is executing. It can appear only in looping or switch statements.

Q #21) What is the behavioral difference when the header file is included in double-quotes (“”) and angular braces (<>)?

Answer: General programs store data into files and retrieve existing data from files. With the sequential access file, such data are saved in a sequential pattern. When retrieving data from such files each data is read one by one until the required information is found.

Q #23) What is the method to save data in a stack data structure type?

Answer: Data is stored in the Stack data structure type using the First In Last Out (FILO) mechanism. Only top of the stack is accessible at a given instance. Storing mechanism is referred as a PUSH and retrieve is referred to as a POP.

Q #24) What is the significance of C program algorithms?

Answer: The algorithm is created first and it contains step by step guidelines on how the solution should be. Also, it contains the steps to consider and the required calculations/operations within the program.

Q #25) What is the correct code to have the following output in C using nested for loop? 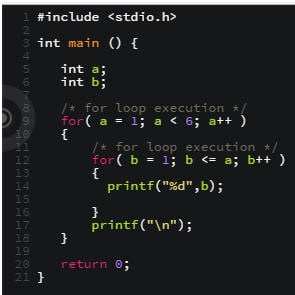 Q #26) Explain the use of function toupper() with an example code?

Answer: Toupper() function is used to convert the value to uppercase when it used with characters.

Q #27) What is the code in a while loop that returns the output of the given code? 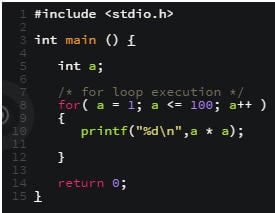 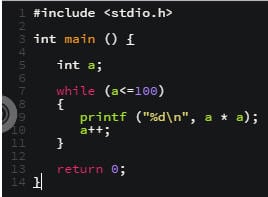 Answer: Incorrect operator is ‘<>’. This format is correct when writing conditional statements, but it is not the correct operation to indicate not equal in C programming. It gives a compilation error as follows.

Q #29) Is it possible to use curly brackets ({}) to enclose a single line code in C program?

Answer: Yes, it works without any error. Some programmers like to use this to organize the code. But the main purpose of curly brackets is to group several lines of codes.

Answer: Modifier is a prefix to the basic data type which is used to indicate the modification for storage space allocation to a variable.

Example– In a 32-bit processor, storage space for the int data type is 4.When we use it with modifier the storage space change as follows:

Q #31) What are the modifiers available in C programming language?

Answer: There are 5 modifiers available in the C programming language as follows:

Q #32) What is the process to generate random numbers in C programming language?

Answer: The command rand() is available to use for this purpose. The function returns an integer number beginning from zero(0). The following sample code demonstrates the use of rand(). 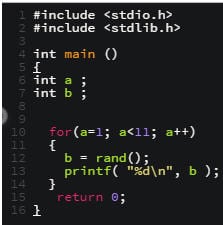 Q #33) Describe the newline escape sequence with a sample program?

Answer: Int data type is only capable of storing values between – 32768 to 32767. To store 32768 a modifier needs to used with the int data type. Long Int can use and also if there are no negative values, unsigned int is also possible to use.

Q #35) Is there any possibility to create a customized header file with C programming language?

Answer: Yes, it is possible and easy to create a new header file. Create a file with function prototypes that are used inside the program. Include the file in the ‘#include’ section from its name.

Answer: Dynamic data structure is more efficient to memory. The memory access occurs as needed by the program.

Q #37) Is that possible to add pointers to each other?

Answer: There is no possibility to add pointers together. Since pointer contains address details there is no way to retrieve the value from this operation.

Q #39) What are the ways to a null pointer that can be used in the C programming language?

Answer: Null pointers are possible to use in three ways.

Q #40) What is the explanation for modular programming?

Answer: The process of dividing the main program into executable subsection is called module programming. This concept promotes reusability.

The questioner is based on the C programming language concepts including memory management with pointers, the knowledge of its syntax and some example programs that use the Basic C program structure. Theatrical and practical knowledge of the candidate is examined with the questions.