List of the most popular Frequently asked SAS Interview Questions with Answers:

In this article, we will take a look at some of the basic as well as advanced concepts of SAS programming through most frequently asked SAS interview questions and answers.

SAS’s large number of components customization, as well as extensive programming approach feature together, performs Data Analysis and Data transformation tasks. It can run on any operating system (Linux, Windows, etc) as it is platform-independent. 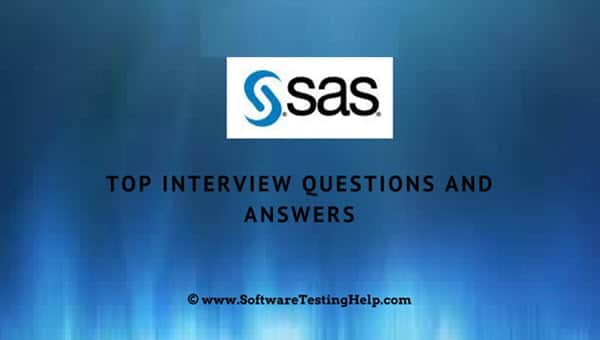 Answer: SAS (Statistical Analysis System) has its own importance in every business domain.

Enlisted below are some of the summarized functions that are performed by SAS:

Q #2) What are the 3 components in SAS programming?

Answer: The 3 components in SAS programming are:

Answer: SAS program is written in Editor Window. Here, it contains a series of statements followed by the proper syntax in an order for the SAS program to understand it.

Some of the syntax rules that are followed in the case of Statement component of SAS are as follows:

Q #4) What are the data types that SAS contains?

Answer: ‘Numeric’ and ‘Character’ are the two types of data types which the SAS program contains.

Q #5) What are PDV and their functions?

Answer: Program Data Vector (PDV) is a logical concept and is defined as an area of memory where a data set is being built by SAS.

Functions of PDV are as follows:

Useful information about the SAS data set can be summarized as follows:

Q #7) Explain why double trailing @@ is used in Input Statements?

Answer: During data step iteration, including double trailing @@ in Input statements implies that SAS should hold the current record for the purpose of execution of the next Input statement rather than switching onto the new record.

Answer: For removing duplicate values from the table, PROC SORT is basically categorized between two options:

The difference between these two options can be seen below:

Q #9) Which command is used to perform sorting in the SAS program?

Answer: PROC SORT command is used for performing sorting, be it on a single variable or multiple variables. This command is performed on the dataset where the new data set is created as a result of sorting but the original data set remains unchanged.

Sorting can be done in both ascending as well as descending order.

For the dataset to display in descending order, keyword ‘Descending’ is used in the BY statement with the column name on which sorting is to be performed.

Q #10) Explain the difference between Informat and Format with an example.

Answer: The difference between Informat and Format can be explained as:

The syntax for INFILE:

The syntax for INPUT:

Q #12) Explain the use of PROC print and PROC contents?

Answer: The PROC step of the SAS program is used to invoke built-in procedures for analyzing the data of the dataset.

PROC print: Ensures that the data present in the dataset are read correctly.

PROC contents: Displays the information about the SAS dataset.

Answer: As the name defines, DATA_NULL_ is a data step that actually does not create any data set.

It is used for:

Q #14) How is character variable converted into a numeric variable and vice versa?

PUT() is used to convert numeric to character. In this case, the source format and source variable type must always be similar.

INPUT() is used to convert a character to numeric. In this case, the source variable type must always be character variables.

Answer: In the current dataset,

_CHARACTER_ defines all the character variables that are currently defined.

Example: To include all the character variables in PROC MEANS, the following statements are used:

_NUMERIC_ defines all the numeric variables that are currently defined.

Example: To include all the numeric variables in PROC MEANS, following statements are used:

Q #16) What commands are used in the case of including or excluding any specific variables in the data set?

Answer: DROP, KEEP, and data set options are used for this purpose.

The variable we want to remove from the data step is specified in the DROP statement.

The variable we want to retain from the data step is specified in the KEEP statement.

Answer: The difference between PROC MEANS and PROC SUMMARY can be understood as follows:

Q #18) Explain the purpose of SUBSTR functions in SAS programming.

Answer: In SAS programming, whenever there is a requirement of the program to abstract a substring, the SUBSTR function is used in the case of a character variable.

When a start position and length are specified, then this function is used for abstracting character string.

Q #19) Name and describe few SAS character functions that are used for data cleaning in brief.

Answer: Few SAS character functions that are used for data cleaning are enlisted below:

Q #20) Mention few ways with which a “table lookup’ is done in SAS programming.

Answer: In SAS programming, the table lookup values can be stored in the following ways:

The following techniques are used to perform ‘table lookup’ in SAS respectively:

Let us see an example which shows the ‘Code’ way to perform table lookup by using ‘IF/THEN’ statements:

Answer: CEIL  function is used for truncating numeric values where it displays the output as the smallest integer. By smallest integer, here means the integer value is greater than/equal to the argument.

FLOOR function is used for truncating numeric values where it displays the output as the greatest integer. By greatest integer, here means that the integer value is less than/equal to the argument.

Q #22) What are the ways in which Macro variables can be created in SAS programming?

Answer: Well a number of different techniques can be used to create macro variables in SAS programming.

Enlisted below are the five most commonly used methods:

Q #23) Explain the purpose of the RETAIN statement.

Answer: As the meaning of the word ‘RETAIN’ signifies to keep the value once assigned, the purpose of RETAIN statement is the same in SAS programming as it’s meaning implies.

Within a SAS program, when it is required to move from the current iteration to the next of the data step, at that time RETAIN statement tells SAS to retain the values rather than set them to missing.

Example: Let us print a program that will display the output value of ‘z’ starting from 1 by using the RETAIN statement.

Q #24) Which command is used to save logs in the external file?

Answer: PROC PRINTTO command is used to save logs in the external file.

Q #25) Mention some common errors that are usually committed in SAS programming.

Answer: Enlisted below are some of the common errors which are usually committed especially when you are new to this programming language.

Answer: To help in tracking the macro code as well as the SAS code generated by the macros, some system options can be used.

The message that will be generated by these system options can be seen in the SAS log.

Answer: The major differences can be discovered/understood by the case explained for both SAS functions and Procedures.

Let us understand it with examples:

Here in the above examples, the arguments passed to the mean function are taken for calculation as an observation.

Here in the above example, Proc means function calculates the average temperature for one argument that is passed as an observation i.e. by month.

Answer: The major differences between the two are mentioned below.

Answer: The special input delimiters used in SAS programming are:

They are used in the statement ‘INFILE’ and DSD has the functionality of ignoring the delimiters that appear enclosed in quotation marks.

Q #30) Which function is used to count the number of intervals between two SAS dates?

Answer: Interval function INTCK is used for counting the number of intervals between two given SAS dates.

So far, we have seen multiple questions and answers which would have given you a clear understanding of  SAS programming concepts as well as given you an idea about the nature of questions being asked in SAS interviews.

Well, if you are new to SAS programming, the knowledge of some technologies of Computer programming and familiarity with SQL (Structured Query Language) will be an added advantage to you for understanding as well as learning SAS quickly.

Hope, you are ready to face any SAS interview confidently!!