List of Most Most Popular JSON Interview Questions And Answers to Help You Prepare For The Upcoming Interview:

Before proceeding to go through these questions and answers, make sure to have a quick look at our previous JSON tutorials.

We have some comprehensive tutorials in detail about JSON and the ways to create them programmatically. We hope our series of JSON tutorials would really be of immense help to enrich your knowledge. 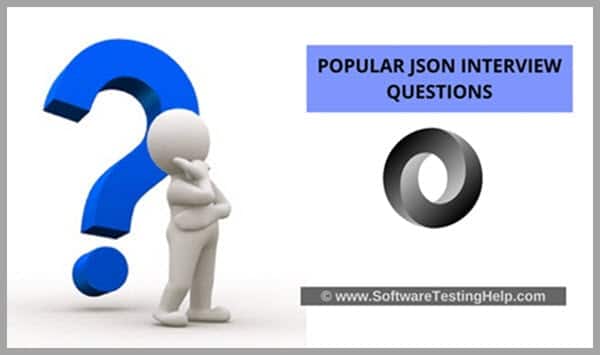 Answer: JSON is the abbreviation of JavaScript Object Notation. It is one of the simplest data interchange format, independent of programming language and platform. Its lightweight text-based structure makes it easily readable. It is derived from JavaScript for presenting simple data in the form of key-value pairs.

It is often used for serialization and transmission of data between the network connections. It is mostly used for data transmission between a web application and the server thereby making it a popular alternative to the XML format.

Q #3) Do all the programming languages and platforms support JSON?

Answer: Yes, most of the technologies that work with the data transmission between the systems, support JSON format. Due to its text-based nature, nearly all the programming languages and platforms can support JSON. These include Javascript, C, C++, C#, Perl, Java, Python, Php, etc.

Answer: An object is defined as a set of key-value pairs. A JSON starts with a left brace “{“ and ends with another right brace “}”. Every key is followed by a colon “:” and the key-value pairs are separated from each other by using a comma “,”. So, basically, the JSON object is a collection of keys along with their values arranged in a pre-specified JSON format.

Q #5) What is the extension of the JSON file?

Answer: A JSON file has an extension of “.json”. Being in a text-based format, a JSON file can be viewed or edited using any text editor like notepad or notepad++.

Q #6) Explain in detail about the advantages and features of JSON?

Answer: JSON structure possesses numerous advantages over the other data interchange formats. They are:

Q #7) What are the limitations of JSON?

Answer: JSON is one of the most popular data interchange format available in today’s scenario. It has several advantages over the other formats but at the same time, it also has its own set of limitations too. They are:

Answer: JSON is mainly used for data interchange between the two systems.

Answer: There are several rules that describe the structure of the JSON. These are:

Q #10) What are the advantages of JSON over XML?

Q #11) What are the similarities between JSON and XML?

Answer: There are several similarities that can be found between JSON and XML. They are:

Answer: Support for JSON is included in almost all the new versions of the browsers. Internet Explorer, Chrome, Safari, Mozilla Firefox, etc. all support JSON format.

Q #13) Explain the use of NewtonSoft framework Net?

Answer: Json.net or Newtonsoft is one of the most popular frameworks used in .net for performing operations with JSON.

Q #14) How to use Newtonsoft or JSON.net for serializing JSON data?

Answer: Newtonsoft or JSON.net is one of the most widely used frameworks for serializing deserializing JSON structure in a .net environment.

To start converting the data into a JSON structure, we need to create an object to store the data.

Once we have created a new object we can define/store the keys and variable in that object.

Once all the data are stored in the defined object, then we can serialize it using SerializeObject.

Q #15) How to use Newtonsoft or JSON.net for deserializing the JSON data?

Answer: Newtonsoft also provides functionality for deserializing the JSON structure to retrieve the data. The deserialization process is just like the reverse of serialization. Here, the same steps are followed but in reverse order.

At first, we need to store the JSON that we want to deserialize in a string.

Once we have stored the JSON structure in a string, we will use the following command to deserialize it and to receive different data.

Now, we will retrieve all the data from the JSON list one by one.

Answer: As per the structure, JSON doesn’t support any comments. Although, a Key or data object can be used to hold your comments. We need to just make sure that during the processing of the JSON, your application ignores the given data element.

Q #17) Name some of the most widely used libraries in .net for JSON?

Answer: There are several popular libraries available for JSON in .net. Some of them are:

Q #18) What is the use of JSON.parse in JavaScript?

Answer: It is used to parse the data present inside the JSON into objects for using its values.

This will convert JSON data into the object from which we can retrieve the data for use with the application.

Answer: JSONP is also known as JSON with Padding. It is a communication technique used by the JavaScript programs to call data from a server that is present in a domain, which is different than that of the client. JSONP allows the users to share data without the restriction of the cross-domain or same-origin policy of the system and the environment.

Q #20) What are the limitations of JSONP?

Answer: JSONP is used to bypass the same-origin policy of web browsers. It may seem like a perfect way to get around the restriction but it has its own set of limitations as well. They are:

This was the list of the most frequently asked questions related to JSON. All the questions and answers provided in this tutorial have been explained in the JSON tutorials published earlier.

Hence, we recommend you to start your learning by going through the tutorials first.

Hope this tutorial will help you in clearing the JSON Interview successfully.