Top PL/SQL Interview Questions with Examples to Help You Prepare For The Upcoming Interview:

This article will discuss the top-most PL/SQL interview question and answers. 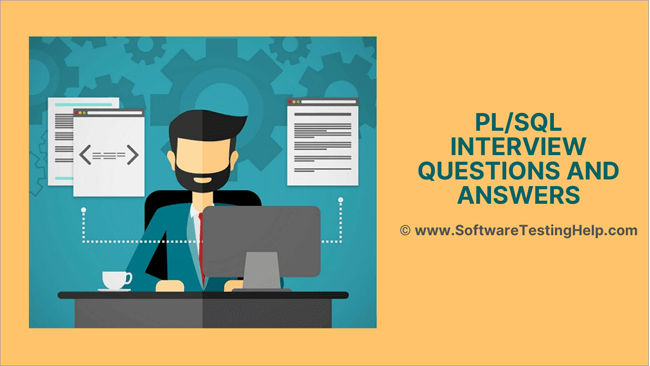 Answer: Difference between SQL and PL/SQL can be categorized as follows:

Q #2) Enlist the characteristics of PL/SQL?

Characteristics of PL/SQL are as follows:

Q #3) What are the data types available in PL/SQL?

Answer: Data types define the ways to identify the type of data and their associated operations.

There are 4 types of predefined data types explained as follows:

Q #4) Explain the purpose of %TYPE and %ROWTYPE data types with the example?

Answer: PL/SQL uses the %TYPE declaration attribute for anchoring. This attribute provides the datatype of a variable, constant or column. %TYPE attribute is useful while declaring a variable that has the same datatype as a table column.

For example, the variable m_empno has the same data type and size as the column empno in table emp.

%ROWTYPE attribute is used to declare a variable to be a record having the same structure as a row in a table. The row is defined as a record and its fields have the same names and data types as the columns in the table or view.

This declares a record that can store an entire row for the DEPT table.

Q #5) What do you understand by PL/SQL packages?

Q #6) What do you understand by PL/SQL cursors?

Answer: PL/SQL requires a special capability to retrieve and process more than one row and that resource is known as Cursors. A cursor is a pointer to the context area, which is an area of memory containing SQL statements and information for processing the statements.

PL/SQL Cursor is basically a mechanism under which multiple rows of the data from the database are selected and then each row is individually processed inside a program.

Answer: There are two types of cursors.

They are explained as follows:

Where, <cursor_name> is the name of the previously defined cursor.

Here, <cursor_name> refers to the name of the previously defined cursor from which rows are being fetched.

<record_list> represents the list of variables that will receive the data being fetched.

Here, <cursor_name> is the name of the cursor being closed.

b) Implicit cursors: When any SQL statement is executed, PL/SQL automatically creates a cursor without defining such cursors are known as implicit cursors.

Answer: The word ‘Trigger’ means to activate. In PL/SQL, the trigger is a stored procedure that defines an action taken by the database when the database-related event is performed.

Triggers are mainly required for the following purposes:

Q #9) Explain the difference in the execution of triggers and stored procedures?

The trigger is executed implicitly whenever any triggering event like the occurrence of DML statements happens.

Q #10) Explain the difference between Triggers and Constraints?

Answer: Triggers are different from constraints in the following ways:

(i) Anonymous blocks: PL/SQL blocks without header are known as anonymous blocks. These blocks do not form the body of a procedure, function or triggers.

(ii) Named blocks: PL/SQL blocks having header or labels are known as Named blocks. Named blocks can either be subprograms (procedures, functions, packages) or Triggers.

Syntax errors are the one which can be easily identified by a PL/SQL compiler. These errors can be a spelling mistake, etc.

Runtime errors are those errors in PL/SQL block for which an exception handling section is to be included for handling the errors. These errors can be SELECT INTO statement which does not return any rows.

Q #13) What are COMMIT, ROLLBACK, and SAVEPOINT?

COMMIT statement: When DML operation is performed, it only manipulates data in database buffer and the database remains unaffected by these changes. To save/store these transaction changes to the database, we need to COMMIT the transaction. COMMIT transaction saves all outstanding changes since the last COMMIT and the following process happens

ROLLBACK statement: When we want to undo or erase all the changes that have occurred in the current transaction so far, we require to be rolled back of the transaction. In other words, ROLLBACK erases all outstanding changes since the last COMMIT or ROLLBACK.

Syntax to rollback a transaction completely:

Q #14) What is the mutating table and constraining table?

Answer: A table that is currently being modified by a DML statement like defining triggers in a table is known as a Mutating table.

A table that might need to be read from for a referential integrity constraint is known as constraining table.

Answer: The variables or an expression referred to as parameters that appear in the procedure call statement is known as Actual parameters.

Here in the above example, emp_num and amount are the two actual parameters.

Here in the above example, emp_id acts as a formal parameter.

Q #16) What is the difference between ROLLBACK and ROLLBACK TO statements?

On the other hand, a transaction is still active and running after ROLLBACK TO command as it undo only a part of the transaction up till the given SAVEPOINT.

Answer: 3 modes of the parameter are IN, OUT, IN OUT.

These can be explained as follows:

Q #19) Why is %ISOPEN always false for an implicit cursor?

Answer: The outcome of the statement is saved in 4 cursor attributes.

Answer: Comments are the text which is included with the code to enhance readability and for the understanding of the reader. These codes are never executed.

Q #22) What do you understand by Exception handling in PL/SQL?

Answer: When an error occurs in PL/SQL, the exception is raised. In other words, to handle undesired situations where PL/SQL scripts terminated unexpectedly, an error handling code is included in the program. In PL/SQL, all exception handling code is placed in an EXCEPTION section.

There are 3 types of EXCEPTION:

Some of the predefined exceptions are:

Q #24) What are PL/SQL cursor exceptions?

The exceptions related to PL/SQL cursors are:

Q #25) Explain the difference between cursor declared in procedures and cursors declared in the package specification?

Answer: The cursor declared in the procedure is treated as local and thus cannot be accessed by other procedures.

The cursor declared in the package specification is treated as global and thus can be accessed by other procedures.

Answer: The INSTEAD OF triggers are the triggers written especially for modifying views, which cannot be directly modified through SQL DML statements.

Answer: Expressions are represented by a sequence of literals and variables that are separated by operators. In PL/SQL, operations are used to manipulate, compare and calculate some data. An expression is a composition of ‘Operators’ and ‘Operands’.

Q #28) List different type of expressions with the example.

Answer: Expressions can be as mentioned below:

Q #29) Write a program that shows the usage of the WHILE loop to calculate the average of user entered numbers and entry of more numbers are stopped by entering number 0?

Q #30) What do you understand by PL/SQL Records?

Answer: A PL/SQL records can be referred as a collection of values or say, a group of multiple pieces of information, each of which is of simpler types and can be related to one another as fields.

There are three types of records supported in PL/SQL:

PL/SQL is very vast when it comes to learning and application. Hope these interview question and answers will help you go through.