Software development has around 70 plus years of history where various languages like FORTRAN, Pascal, C, C++ were invented. There were a series of statements that act as commands given to hardware to perform some basic mathematical calculations, making procedural languages to design various software applications.

With invent of the Internet, secured, stable, and platform-independent and robust languages were needed in designing complex applications. 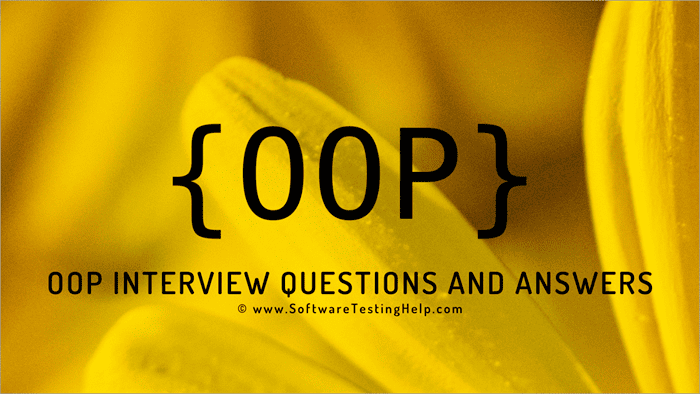 Advantages of OOPS are reusability, extensibility, and modularity that improve productivity, easier to maintain due to modularity, faster and lower cost of development due to code reuse, produces secured, and high-quality applications.

Various concepts such as Abstraction that ignores irrelevant details, Encapsulation that focuses on what minimum is required without disclosing any complexities over internal functionalities, Inheritance to inherit properties of the parent class or implement multiple inheritances using an interface, and Polymorphism that extends properties of method overloading (static polymorphism) and method overriding (dynamic polymorphism).

Q #1) Explain in brief what do you mean by Object Oriented Programming in Java?

Answer: OOP deals with objects, like real-life entities such as pen, mobile, bank account which has state (data) and behavior (methods).

With help of access, specifiers access to this data and methods is made secured. Concepts of encapsulation and abstraction offer data hiding and access to essentials, inheritance, and polymorphism help code reuse and overloading/overriding of methods and constructors, making applications platform-independent, secured and robust using languages like Java.

Answer: Java is not an entirely pure object-oriented programming language. The following are the reasons:

Q #4) What are the differences between class and objects in Java?

Answer: Following are a few major differences between class and objects in Java:

Q #5) Why is a need for Object-oriented programming?

Answer: OOP provides access specifiers and data hiding features for more security and control data access, overloading can be achieved with function and operator overloading, Code Reuse is possible as already created objects in one program can be used in other programs.

Answer: Abstraction in object-oriented programming means hiding complex internals but to expose only essential characteristics and behavior with respect to context. In real life, an example of abstraction is an online shopping cart, say at any e-commerce site. Once you select a product and book order, you are just interested in receiving your product on time.

How things happen is not what you are interested in, as it is complex and kept hidden. This is known as abstraction. Similarly, take the example of ATM, the complexity of internals of how money is debited from your account is kept hidden, and you receive cash via a network. Similarly for cars, how petrol makes the engine run the automobile is extremely complex. 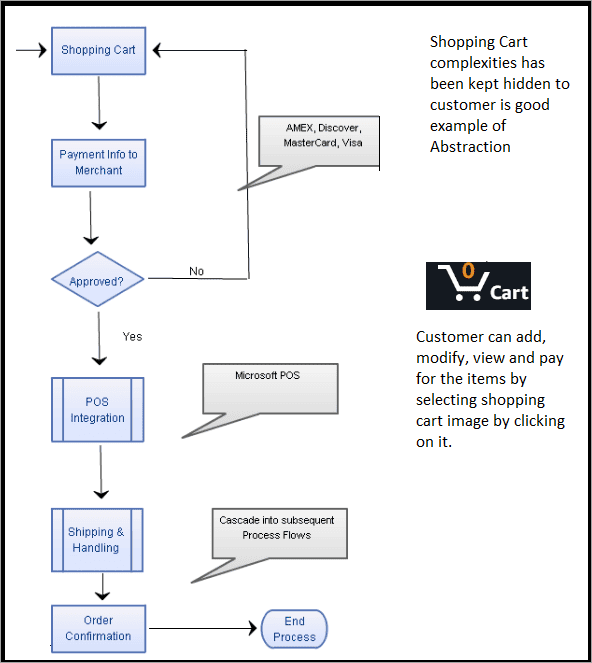 Q #7) Give some real-time examples and explain Inheritance.

Q #8) How polymorphism works in Java, explain with real-life examples?

Answer: Polymorphism is an ability to have multiple forms or capability of the method to do different things. In real life, the same person performing different duties behaves differently. In-Office he is an employee, at home, he is a father, during or in after school tuitions he is a student, on weekends he plays cricket and is a player in the playground.

In Java, there are two types of polymorphism

Q #9) How many types of inheritance are present?

Answer: Various types of inheritance are listed below:

Answer: Interface is similar to the class where it can have methods and variables, but its methods do not have a body, just a signature known as the abstract method. Variables declared in the interface can have public, static, and final by default. Interface is used in Java for abstraction and multiple inheritances, where the class can implement multiple interfaces.

Q #11) Can you explain the advantages of Abstraction and Inheritance?

Answer: Abstraction reveals only essential details to the user and ignores or hides irrelevant or complex details. In other words, data abstraction exposes the interface and hides implementation details. Java performs abstraction with the help of interfaces and abstract classes. Advantage of abstraction is that it makes simple in viewing things by reducing or hiding the complexity of implementation.

Duplication of code is avoided, and it increases code reusability. Only essential details are revealed to the user and improves the security of the application.

Q #12) What is the difference between extends and implements?

Answer: Both extends and implements keyword are used for inheritance but in different ways.

The differences between Extends and Implements keywords in Java are explained below:

Q #14) Explain the difference between abstract class and method?

Answer: Following are some differences between abstract class and abstract method in Java:

Q #15) What are the differences between method and constructor?

Answer: Following are the differences between constructors and methods in Java:

Answer: Constructor is a method without a return type and has its name the same as the class name. When we create an object, a default constructor allocates memory for an object during the compilation of Java code. Constructors are used to initializing objects and set initial values for object attributes.

Q #17) How many types of constructors can be used in Java? Please explain.

Answer: There are basically three types of constructors in Java.

Answer: When we create an instance of class, i.e. objects, we use the Java keyword new. It allocates memory in the heap area where JVM reserve space for an object. Internally, it invokes the default constructor as well.

Answer: Super is a Java keyword used to identify or refer parent (base) class.

Answer: this keyword in Java refers to the current object in the constructor or in the method.

Q #21) What is the difference between Runtime and compile-time polymorphism?

Answer: Both runtime and compile-time polymorphism are two different types of polymorphism. Their differences are explained below:

Q #22) What object-oriented features are used in Java?

Answer: A concept of using an object in Java programming language benefits by the use of object-oriented concepts like encapsulation for binding together the state and behavior of an object, secures data access with access specifiers, features like abstraction in information hiding, inheritance to extend state, and behavior of base classes to child classes, compile-time and runtime polymorphism for method overloading and method overriding, respectively.

Q #23) What is method overloading?

Q #26) What types of arguments can be used in Java?

Answer: The differences between Static and Dynamic binding are explained in the below table.

Q #28) Can you explain base class, subclass, and superclass?

Answer: Base class, sub class, and super class in Java are explained as follows:

Answer: Operator overloading is not supported by Java as,

Q #30) When the finalize method is used?

Answer: finalize method is called just before the object is about to be garbage collected. This method overrides to minimize memory leaks, undertake cleanup activities by removing system resources.

Answer: Tokens in the Java program are the smallest elements that the compiler recognizes. Identifiers, keywords, literals, operators, and separators are examples of tokens.

Object-oriented programming concepts are an integral part for developers, automation as well as manual testers who design automation testing framework to test an application or develop applications with Java programming language.

In-depth understanding is mandatory of all object-oriented features like class, object, abstraction, encapsulation, inheritance, polymorphism, and applying these concepts in a programming language like Java to achieve customer requirements.

We have tried to cover the most important object-oriented programming interview questions and gave appropriate answers with examples.

We wish you all the best for your upcoming interview!