Swift is a powerful and interactive programming language created for iOS, macOS, tvOS and watchOS, and Linux development by Apple Inc.

Swift is a fantastic way to develop software, it is an interactive programing language which is fast, safe, and friendly to new programs. Swift is the most popular language for developing apps for Apple’s devices, it is an alternative to the Objective-C language with some added object-oriented features. 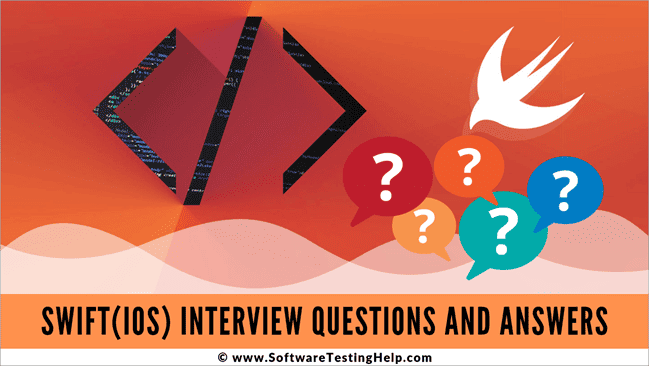 Here is a list of the top iOS Swift interview tips and questions along with the answers.

Answer: Swift is a compiled and new programming language evolved by Apple Inc in June 2014 in order to develop apps for mobile and desktop. This language works for watchOS, macOS, iOS, and tvOS.

Apple created Swift language to work with both Cocoa Touch and Cocoa. Swift supports multiple operating systems such as Free BSD, Linux, Darwin, etc. This language was designed to work along with the Objective-C library and Cocoa framework in the Apple products.

Q #2) What are the advantages of using Swift?

Answer: Swift programming language has speedily become one of the quick-growing languages in memoir. Swift makes us develop software that is incredibly fast, robust and secure.

This language is the most useful programming language that is used to develop an application for macOS and iOS(iPad and iPhone).

There are some important advantages offered by developing apps for macOS and iOS using swift.

Answer: Enlisted below are the various differences between Swift vs Objective-C.

Q #4) Where can we test the apple iPhone apps if we don’t have an iOS device?

Answer: If we don’t have an iOS device, we can test our application on simulators provided by Apple on the Mac system.

Q #5) What are the tools that are required to develop iOS applications?

Answer: These are some of the essential tools that we should have:

Q #6) What are the most important features of swift?

Answer: Some important features of swift are given below:

Answer: The 5 common execution states are as follows:

Q #9) What type of objects are basic data types in swift?

Answer: Swift uses a standard set of basic data types for different purposes such as Boolean values, numbers, and strings.

Answer: Initialization is a process of preparing an instance of an enumeration, structure or class for use.

Initializers are also called to create a new instance of a particular type. An initializer is an instance method with no parameters. Using the initializer, we can write the init keyword.

Q #11) What are the control transfer statements that are used in iOS swift?

Answer: The control transfer statements that are used in iOS swift include:

Q #12) What is the difference between Let and Var in swift?

Answer: In swift language, we can declare a constant and variable using Let and Var keyword.

We cannot change the value of age, you can declare the constant value of it only once using the let keyword.

we can change the value of name = “Apple”.

Swift makes it easy to create an array in our code using an array literal. Array elements are simply surrounded by a comma and the list of values is separated with square brackets.

Q #14) Which JSON framework is supported by iOS?

Answer: PLIST stands for Property List. PLIST is basically a dictionary of value and keys that can be stored in our file system with a .plist file extension. The property list is used as a portable and lightweight means to store a lesser amount of data. They are normally written in XML.

Different types of property lists are mentioned below:

Answer: Dictionaries are an association of an unordered collection of key-value pairs. Each value is associated with a unique key, which is a hashable type such as a number or string. We can use the dictionary concept in swift programming language whenever we want to obtain the values based on a key value.

Following is the syntax of defining a dictionary in the Swift programming language.

Following are the different ways of creating a dictionary with key-value pairs in the declaration.

Answer: The protocol is a very common feature of the Swift programming language and the protocol is a concept that is similar to an interface from java. A protocol defines a blueprint of properties, methods, and other requirements that are suitable for a particular task.

We can define a protocol in a way that is very similar to structures, enumerations, and classes:

We can define multiple protocols, which are separated by commas:

Answer: Delegate is a design pattern, which is used to pass the data or communication between structs or classes. Delegate allows sending a message from one object to another object when a specific event happens and is used for handling table view and collection view events.

This exactly does the common thing, if stringVar is not nil then it is returned, otherwise the “default string” is returned.

Answer: A GUARD statement is used to transfer the program control out of the scope when one or more conditions are not met. Using this statement helps in avoiding the pyramid of doom.

A GUARD statement will be in the following form:

Q #21) What are the collection types that are available in swift?

Answer: There are three primary collection types that are available in swift for storing a collection of values. They are dictionaries, sets, and arrays

Answer: The “defer” is a keyword that provides a block of code that can be executed while the execution is leaving the current scope.

Answer: A tuple is a group of different values in a single compound value. It is an ordered list of elements. There are two ways of accessing the object data in a tuple i.e. by name or by position.

In swift, a tuple can consist of multiple different types. It can support two values i.e. one of integer type, and the other of a string type. It is a legal command.

For Example: let ImplementationError = (501, “Not implemented”).

Q #24) What is the difference between Array and NSArray?

Answer: The difference between Array and NSArray are given below:

Q #25) What is the difference between class and structure?

Answer: The difference between class and structure are given below:

Q #26) What are the best ways of achieving concurrency in iOS?

Answer: The three best way to achieve concurrency in iOS are given below:

Q #27) How to create a constant in Swift programming?

Answer: We have to use the “let” keyword to declare a constant in the Swift Programming.

Q #28) How to pass the data between view controllers?

Answer: There are three ways to pass the data between view controllers as shown below.

Answer: In a swift programming language, classes are not inherited from the base class. The classes are defined by the developer without specifying the superclass and it will become the base class automatically.

Q #30) How can we make a property Optional in swift?

Q #31) Who calls the main function of our app during the app launch cycle?

Answer: Images, Buttons, labels, text fields, and any other elements that are visible to the user within the application are called UI elements.

Q #33) Which is the superclass of all the view controller objects?

Answer: The new features in swift 4.0 are given below:

Q #35) How to write a multiple line comment in swift?

Answer: A multiple line comment is written in between the (/*) at the starting point and (*/) at the endpoint.

Q #36) What are the source items used by Xcode?

Q #37) What are the different ways to pass data in swift?

Answer: There are several ways to pass data in swift such as KVO, Delegate, NSNotification & Callbacks, Target-Action, etc.

Q #38) Explain the usage of Class and benefits of Inheritance.

Answer: Some common features of Protocol & Superclass are given below:

Answer: Some bigger changes in UserNotifications are given below:

Answer: Optional chaining is a useful process which we can use in combination with the optional to call the methods, properties, and subscripts on the optionals and these values may or may not be nil. In this process, we may try to retrieve a value from a chain of the optional values.

Optional binding can be used with the condition (if and while) statements to check for a value inside an optional.

Q #43) What are the Higher-Order functions in swift?

Answer: The higher-order functions are given below:

Q #44) Explain some design patterns which we normally use during the app development.

Answer: The design patterns that are used during app development are given below:

Q #45) What are the various ways to unwrap an optional in swift?

Answer: There are seven ways to unwrap an optional in swift. They are:

Q #46) What mechanism does iOS support for multi-threading?

Answer: Core data is one of the most powerful frameworks provided by Apple for macOS and iOS apps. Core data is used for handling the model layer object in our applications. We can treat Core Data as a framework to filter, modify, save, track the data within the iOS apps. Core Data is not a relational database.

Using core data, we can easily map the objects in our app to the table records in the database without knowing any SQL. Core data is the M in MVC structure.

Some features of Core data are given below for your reference:

MVC builds on top of the Object-Oriented Programming concepts. It structures the flow of data and interaction in our app. Model-View-Controller is an important fundamental concept to be understood in iOS development. Many iOS frameworks, like UIKit, Cocoa Touch, use the MVC pattern for messaging and structured data flow.

Model-View-Controller is used to pass the data from one part of our app to another.

Its a design pattern used to assign objects in an application in any one of the three roles:

We have explored all possible and important Swift interview questions along with their answers and examples in this article.

We hope that the answers provided here would indeed be very helpful in understanding the iOS swift basics and advanced topics. Clear knowledge of these Swift and iOS developer interview questions would assist any beginner or experienced professional to successfully clear the interview at the first attempt.

All the best for your interview!!