DNS is now prone to distributed denial of service (DDoS) attacks where an attack to centralized Internet servers leads to the breaking down of websites.

For instance, a DDoS attack on a company like Dyn that controls much of the Internet’s infrastructure may lead to the breakdown of most websites.

=> Read Through The Series Of Blockchain Tutorials Here 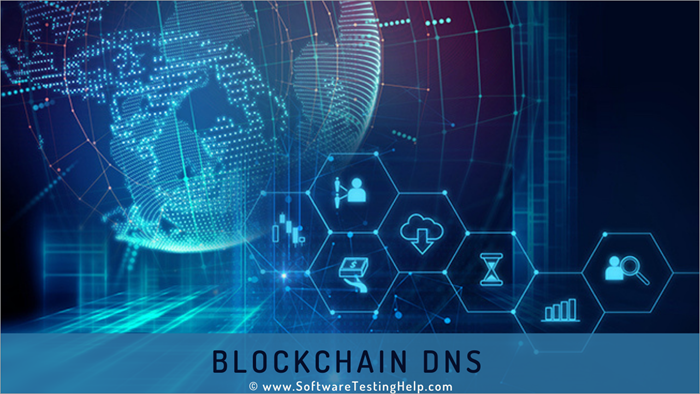 In a DDoS/DoS attack, the network is unable to respond to normal requests as it is maliciously flooded with a flood of requests to exceed the required load to the server. This is done when a network of computers is wrongly configured or invaded with malware to direct or redirect a lot of traffic to the server.

DNS queries can also be redirected to attackers by the attackers infecting a trusted DHCP server with malware such that the network uses a malicious resolver. This is because most devices will send the DNS requests to the resolver which can be arranged by network providers via DHCP protocol.

This is due to the fact that although traditional DNS servers are distributed all over the world, they are centralized in administration and redundancy as they refer to a central authority, a single point of failure.

For instance, ICANN, which is administered by the US, manages the root zone. DNS relies on unencrypted UDP packets, hence there is no end-to-end data integrity.

What Is Blockchain DNS

A blockchain DNS is a decentralized DNS server that allows registering, managing, and resolving of domain names on the blockchain. Decentralized means that the network is run and related files are stored and shared on a peer-to-peer server system where network participants acting as nodes connect to each other directly without middlemen.

Generally, a domain name server is a public directory stored on a network of computer servers, and which receives inputs from the user using the internet and website for instance via a browser, to convert them into machine-readable formats. The process is known as DNS resolution.

For instance, the DNS service will convert a website address like www.softwaretestinghelp.com into a system of numbers called an IP address, which is readable and interpretable by machines than would the alphabetical letters.

This IP allows the browser the user is using to browse the internet, to find the right server on the Internet so the user will find the information they are looking for.

The website address is associated with the DNS with the corresponding IP. The DNS service associates Internet resources with particular IP addresses, thereby making them usable in different hosts, networks, protocols, Internet, and administration activity.

Traditionally, DNS’s are based on a centralized server i.e. servers controlled by select organizations and groups and people.

Organizations such as the Internet Corporation for Assigned Names approve Top Level Domains (TLDs) names like those with .com extension and accredits domain name registrars such as Godaddy to sell the rights to use domain names. Registrars also operate the TLDs.

The fact that only a few organizations control centralized DNS servers expose internet services to censorship or blockage says by those controlling the server resources or governments, as well by the way of disruption following natural disasters or unseen situations.

Centralized systems are also more vulnerable to cyber-attacks and corruption as the attackers would only need to hijack a few servers or corrupt a few controllers. They are also affected politically by domain theft and seizures.

Centralized DNS systems are not encrypted or have weak encryption, meaning the DNS Server and everyone else on the route i.e. governments, spies, hackers, etc know what website you are requesting to visit, etc.

Over-relying on a single corporation to oversee the DNS root and to assign top-level domains can lead to problems such as the corporations being under pressure from governments and organizations, such that they could be forced to remove some names from the DNS or prohibit the use of certain names.

Also, a government or authority could for instance direct that Internet Service Providers in a certain country stop directing domain traffic to a particular IP address, which constitutes censorship.

Centralization also means lack of service or downtime when one component of the whole is not working as the resources are hierarchical.

To solve the above problems – which may not be always a problem since harmful content for instance adult content reaching kids – may be successfully blocked for the better good, and decentralized DNS was invented.

In a blockchain DNS, the DNS is based on blockchain technology, which is based on a decentralized peer to peer network or peer-to-peer sharing of Internet resources.

As the DNS files and resources are first encrypted by cryptography and then shared and distributed across the entire blockchain network, they are harder to hack, modify, delete, or corrupt, or be interrupted by way of censorship by governments or by way of a natural disaster affecting a localized region.

That is if the network is really distributed say beyond the geographies where those limitations are occurring. Blockchain DNS also features blockchain website domain extensions that include .bit, .bazar, .coin among others. The lookup tables are shared across a distributed peer-to-peer network on the blockchain.

Workings Of A Blockchain DNS

Owners of domain names store cryptographic signatures on a public blockchain. It means a device, app or other services using the internet will check a corresponding entry to find the correct signature. Thus there is no need to contact a central organization to get a digital certificate.

These are websites based on the blockchain. Unlike traditional website domains, these are not popular, have non-ordinary extensions like .eth, are based on complex smart contracts to form a human-readable web address, and a user will need to install special extensions and plugins on their normal website browser to access these types of websites.

Domain owners will register a domain on a blockchain. These owners, just like with crypto coins, will get private keys (crypto wallets) to the domain and can control the domain fully. Users can launch their websites without contacting or getting permission from ICANN.

Just like crypto coins, the web domain assets belong to the domain owner and not a central authority. The domains cannot be censored. Users can choose whichever extensions they want or need.

These domains can make payments on the Internet native in addition to being secure and seamless – the users can send payments to domain names directly instead of using alphanumeric addresses or a long numeric account number.

#1) Availability means no service disruptions on the hosted websites. Peer-to-peer network hosting of websites ensures availability on a 24-hour basis.

#2) Integrity ensures no corruption of data on the DNS. Blockchain achieves consensus using consensus protocol and this ensures integrity, meaning there is no need for DNSSEC’s famous key renewal. Blockchain ensures cryptography encryption, so data cannot easily be hacked and corrupted or modified.

DoH resolvers can also be deployed on blockchain for the purposes of decentralization.

DNS on the blockchain ensures that all the DNS data – DNS zone files or domain name configurations – as well as all the players (domain registries, registrars, etc), are registered on a distributed blockchain network to facilitate better management of the DNS in a more secure manner.

Here is a list of popular Blockchain DNS Software:

This first fork of Bitcoin was the first blockchain-based DNS system. It uses a .bit top-level domain name. 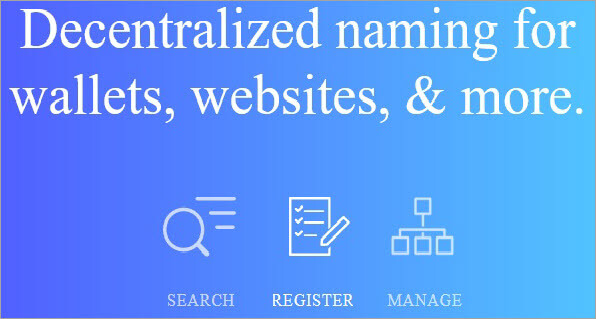 Their domain name service integrates blockchain-based DNS with the traditional DNS system. Thus it allows you to combine the benefits of both.

Handshake relies on network participants to validate DNS zones. This assures a secure and resilient system. Further, the root level of the DNS is managed by a naming protocol. 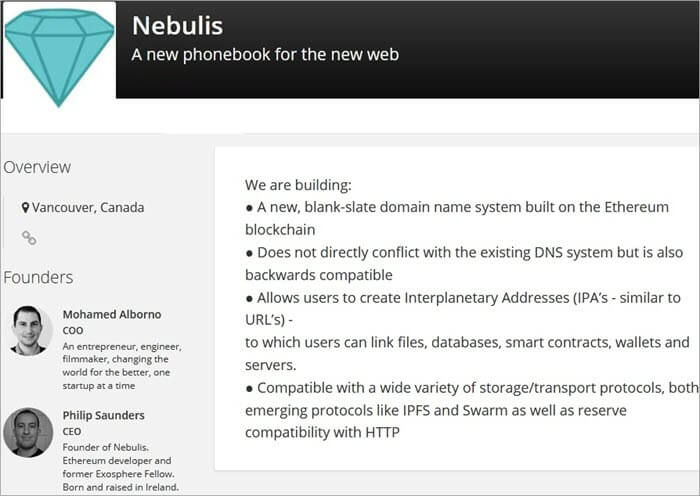 Nebulis uses the Ethereum blockchain network to create a decentralized DNS. It also uses Interplanetary Filesystem (IPFS) to decentralize the web by decentralizing the web servers.

Dot BIT blockchain DNS ensures that the DNS files and system resides on your computer instead of being hosted and controlled by private bodies, governments, and other corporations.

Emercoin – as an alternative to DNS 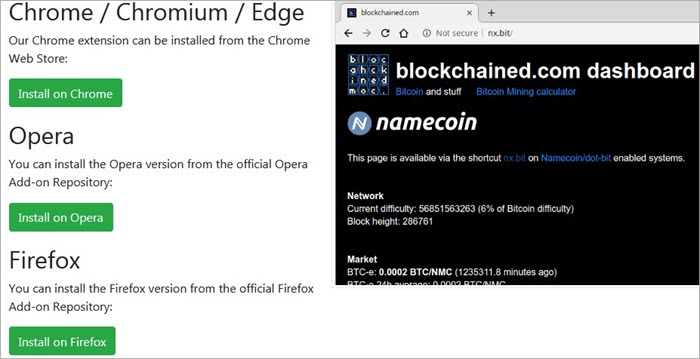 Peername and its plugin for Chrome, Opera, and Firefox.

The DNS allows for easy resolving of .bit, .emc, .coin, .lib, and .bazar domains and redirecting of NXT aliases. It is based on NXT, EmerCoin, and Namecoin cryptocurrencies.

It uses the BDNS public web API to resolve the domain names based on blockchain name systems.

#10) FrigGate For Chrome And Other Browsers

Like with other blockchain DNS services, you get uninterrupted Internet with this one and can unblock blocked sites. It checks the speed of access to the site and when slow, it connects through a proxy. 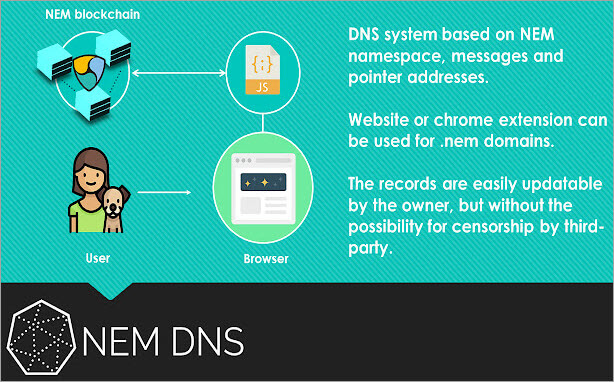 This DNS extension allows the users to browse websites with .nem extension, which are the domain names from the NEM blockchain name systems. 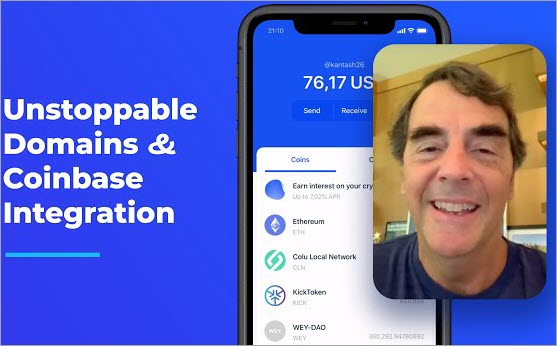 This service allows you to launch a non-censorable website stored in a user’s wallet just like the cryptocurrencies. The domain can be pointed to the content located on a decentralized storage network.

The Aloaha blockchain DNS server can be used in a number of things including publishing distributed storage content and publishing other kinds of information.

Blockchain DNS allows the users to register, manage, and resolve domain names on the blockchain-based domain name systems such as .bit, .bazar, .coin among others.

The DNS files are encrypted and thus are harder to hack, modify, delete, or corrupt. They also cannot be interrupted by way of censorship by governments. The lookup tables are shared across a distributed peer-to-peer network on the blockchain.

Using a blockchain DNS system together with the Interplanetary File Systems and other systems that allow web owners to hosts Internet files on the blockchain, make websites more secure, private, hack-resistant, and resistant to censorship-resistant, reliable and available, and only owners can make changes to current records and transfer domains.

Suggested reading =>> How to fix ‘DNS Server not responding’ error

An important way to use blockchain DNS is by downloading software on your computer and the others are by using extensions and plugins on Internet browsers.