List of the Top BlockChain Companies with Detailed Comparison:

Are you interested in blockchain technology? Are you looking for the best of its companies?

You may be a developer or a technology officer who desires to work in a good blockchain company. There can be any reason to know more about Blockchain technology and its top companies.

This article will indeed put an end to all your searches.

Though blockchain is a part of the emerging technology, it is hot, and many are stirred towards benefiting from the technology. It is a phenomenon that is transforming, not only the financial industry but also other key sectors like, the health industry, media, aviation, and even the government parastatals.

A lot of questions have been asked about blockchain, but before we see the answers to them, let us first see what blockchain is. 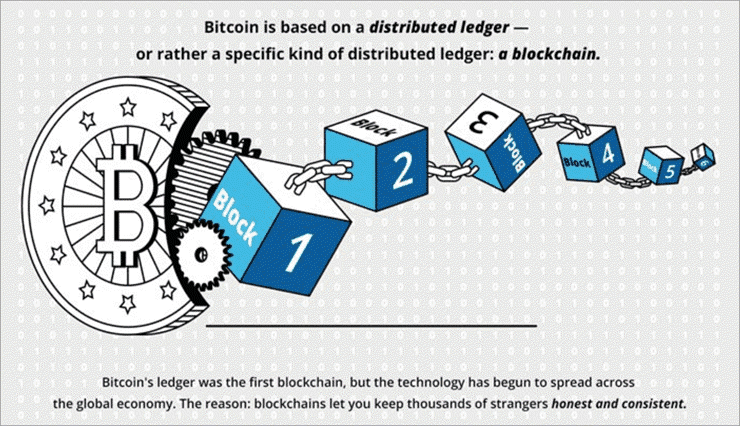 You may have heard about blockchain in connection to bitcoin and other cryptocurrencies but it is actually more than that, it is a decentralized technological system in which the transactions made in digital currencies are recorded and kept in several computers that are linked together.

It is a growing list of a record called blocks, linked with cryptography and function as a distributed ledger, managed by a peer-to-peer network, linked to a protocol for inter-node communication and building new blocks.

How Did Blockchain Come About?

Blockchain has been in existence as a concept in computer science even before it was used in cryptocurrency. The initial form of blockchain was known as the hash tree or Merkle tree, patented by Ralph Merkle in 1979. It functioned by verifying and handling data between computer systems.

In 1991, the Merkle tree was used to create a ‘secured chain of blocks’ of several data, which were connected in a chain, one after the other. The newest record in the chain will contain the history of the entire chain, and this is how blockchain was formed.

In 2008, a set of people known as Satoshi Nakamoto came up with a concept of distributed blockchain which would contain a secured history of data exchanges. It functions through a peer-to-peer network to time stamp and verify exchange transactions and could be managed independently without a central authority.

The peer-to-peer version of this electronic cash is known as ‘bitcoin’ and this is how the blockchain we know today came about.

How Does Blockchain Work?

The blockchain records and maintains all the data exchanges, and this record is known as a ledger and the exchange data recorded in this ledger is known as transactions.

It connects through so many computers that are known as nodes, and each has a copy of the blockchain. The nodes ensure that the transactions are not altered by inspecting the hash, a transaction is written into the block only if it was approved by a greater number of nodes.

Each block refers to the previous one, and together form the blockchain. The blockchain updates itself every ten minutes.

So far we have seen what blockchain is, how it came about and how it functions, etc., we are going to look at the ten most popular blockchain companies.

You may be thinking of engaging the services of a blockchain company, but before you do that there is a need for you to check the kind of service they provide. When we talk about blockchain services, it is not only limited to bitcoin and other cryptocurrencies, but it can also be used in so many other ways.

The technology industry has discovered so many applications of blockchain in finance and other key industries. Blockchain distributed ledger technology can be used to increase transparency in data management and reduce fraud.

It allows all customers to access a cloud-based solution, to build, host, and use their own blockchain apps, smart contract and other functions on the blockchain system while the blockchain company takes care of all the activities involved in maintaining the functionalities.

Enlisted below are the most popular Blockchain Technology Companies and service providers providing Blockchain Services.

In the below table, you will be able to find the top blockchain companies and services in just a glance.

ScienceSoft is ISO 9001 and ISO 27001 certified and thus guarantees professional management of quality and information security in all their projects.

xVia is another financial tool developed by Ripple, that enables businesses to send payment through RippleNet.

Headquarters: San Francisco, California, USA
Employees: It has six key people in its management, including the CEO and additionally has 150 employees. 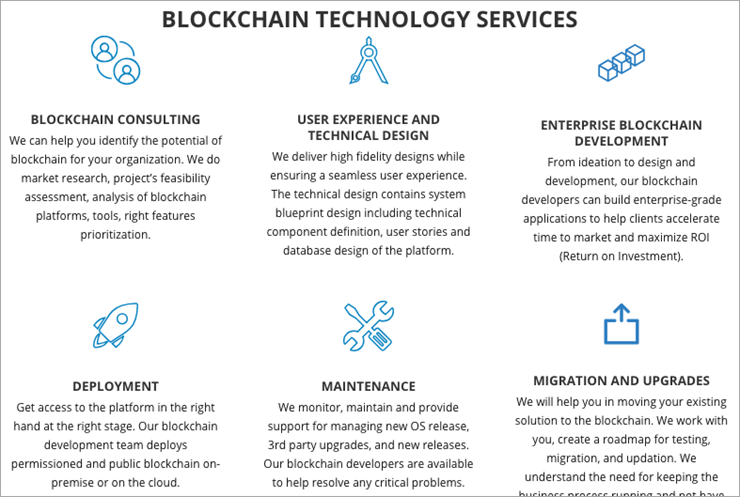 It is a blockchain company that specializes in building blockchain applications for startup and enterprises. This award-winning software development company was established in 2007, and it has produced several digital platforms on the cloud, mobile, blockchain, and IoT.

Its services include software development, Hedra hashgrapgh consulting, ICO and STO launch service. They have also specialized in blockchain development on a different framework, dApps, and smart contracts.

This company is based in Norway and was launched in 2015 for helping clients understand and use blockchain technology. They work to promote blockchain through cooperation with private and public institutions to define the future of blockchain.

Techracers is now rebranded to Deqode. Deqode provides blockchain solutions to businesses for solving complex problems. It will help businesses to optimize their business processes and encourage business growth.

Deqode has expertise in Blockchain, DLT, Software, Development, Consultancy, Crypto, and Application. It provides solutions to Enterprises, Startups, and labs.

This blockchain development company was established since 2014 to develop a blockchain platform that works with private and public sectors to build smart contracts and other decentralized blockchain applications for mostly real estate and financial industries.

One of their major achievements was to build the Green Asset Wallet which is a platform that connects green investors with potential investment opportunities. This initiative contributed to the achievement of the objectives of the Paris Climate Agreement.

Their main service focus is on blockchain as a database, they introduced postchain, a distributed database management tool with distributed control. 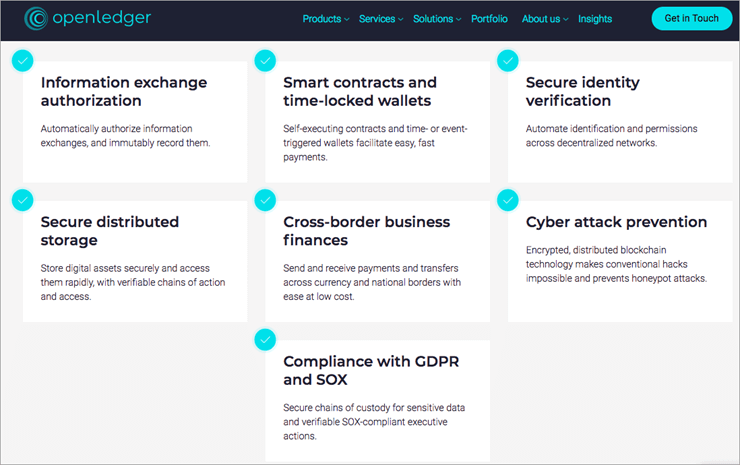 This company works with clients globally in order to build innovative blockchain solutions and products. It also enables them to utilize an existing blockchain solution to grow their businesses and lower expenses. It creates new business tools for clients based on the revolutionary decentralized networks that can transform businesses.

This Danish blockchain company was founded in 2014 by Ronny Boesing. Its services include Blockchain development such as Graphene, Bitshare, and HyperLedger. ICO/ITO services such as ICO Escrow, ICO Advisory, ICO Tech Support, ICO Marketing, and PR.

Ezetech is a web development and Tech Company that was launched in 2015 and works with non-technical companies that want to startup blockchain projects.

It offers IT consulting to non-technical entrepreneurs in New York and helps them to resolve technological challenges. They achieve this by working with early-stage companies or startups to build minimum viable products (MVP) to jumpstart the iteration process. 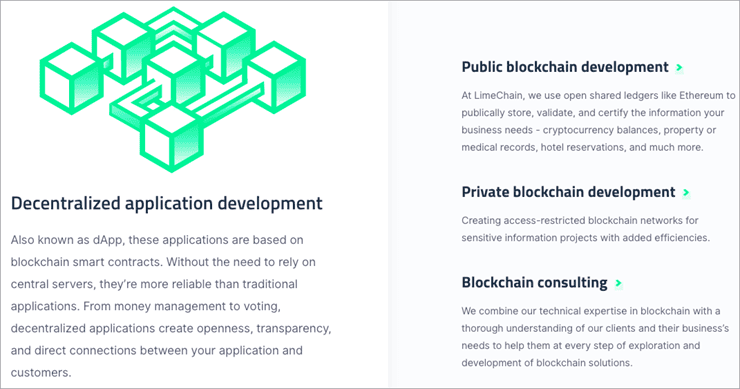 Limechain is a blockchain development company that specializes in building a blockchain solution for startups and corporate businesses. Based in Sofia Bulgaria, this company was founded by four friends in November 2017. Their aim was to initiate the development of blockchain both locally and internationally.

It has big companies in its list of clients such as Arxum, Vaultitude, LockTrip, Propy, and Iris.Ai. Their services include blockchain development, smart contracts, ICO & Crowd Sale.

Chain is a blockchain development company that was launched in 2014. It specializes in building a cryptographic ledger system for financial services companies. Based in the US, the company uses its blockchain-based tools to help banks, stock exchanges, and credit-card companies to secure, trade and manage financial assets.

They created sequence ledger-as-a-service that works with the private ledger and public networks for secure token transactions. It can be used for mobile wallets, a ride-sharing app, and a crypto exchange platform. Another one is the virtual transaction machine called TxVM.

Its other services include the development of blockchain, cryptography, payment systems, distributed system, ledger technology, etc. 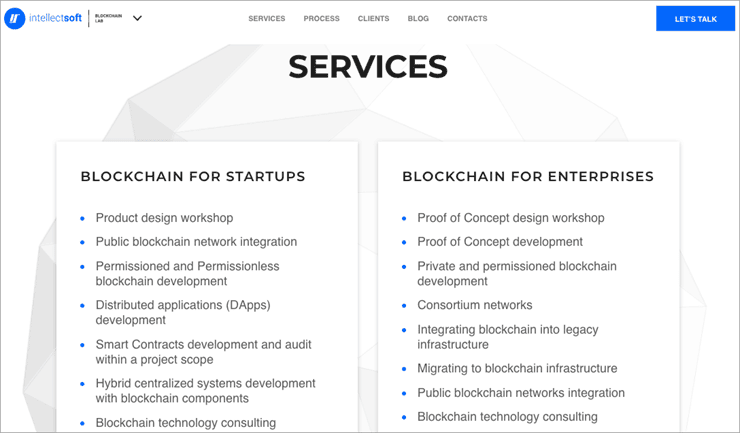 Intellectsoft is a mobile app development company that has evolved over the years into a software solution development company. It was launched in 2007. They provide custom software development and consultancy services in emerging technologies, like blockchain, artificial intelligence, cloud computing, internet of things, etc.

They are innovative and offer assistance to clients who want to secure business tech products through blockchain distributed ledger and smart contract protocol.

Since 2007, it started the development of the app, and have been in partnership with fortune 500 companies and world-class brands like Nestle, Jaguar, Eurostar, Ernst, and Young. Their innovative work made them one of the best blockchain companies in 2018.

Their services include the development of apps, blockchain consulting and transformation of businesses.

Blockchain technology is an emerging market, hence many startups are springing up every day.

The list above shows the top blockchain companies to search out for if you are looking to engage their services.

Also read =>> How to become a Blockchain Developer

Hope this informative article on Blockchain Companies would have helped you a lot!!