What is Distributed Denial of Service (DDoS) attack?

While working on a computer system there are several vulnerabilities which may cause system failure via several intruder activities.

These activities include DDoS attack which blocks the network resources for its users through multiple sources. This article will give you a complete overview of how DDoS attack can be recognized, its types, techniques, prevention etc., in detail for your easy understanding. 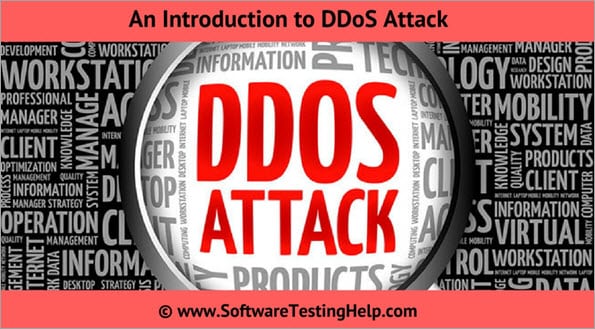 What is a DDoS attack?

The points given below will brief you the meaning of DDoS attack:

#1) DDoS (Distributed Denial of Service) attack is basically used to flood out network resources so that a user will not get access to the important information and will slow down the performance of application associated.

#2) It usually uses Trojan to infect a system and as it comes from multiple sources it is difficult to identify the appropriate origin of the attack.

#3) Until now there are few symptoms that have been traced to identify that your system is being targeted by DDoS.

A DDoS attack is categorized into several types, but mainly there are 3 types only.

Though the Brute Force attack is considered to be the most common way of a DDoS attack that generally comes from the botnet (It is a network environment that consists of devices infected with malware).

Based on the behavior & target, the types of DDoS attack are categorized as shown below:

In this type of attack, the attacker sends a huge amount of TCP or UDP packets to the system to be attacked and thereby constantly reduces its performance.

This attack creates congestion by consuming bandwidth between the network service an also floods the target with a huge amount of anonymous data.

This attacks a specific aspect of the system or network and it is so difficult to recognize and mitigate. Application layer conflicts cause depletion of resources at the application layer.

The DDoS attack is triggered using some traditional techniques which are as follows:

This particular technique is implemented by flooding SYN requests with a forged/false sender address. As the sender address is forged the recipient waits for the next reply from the sender after sending an acknowledgment.

But never gets any reply, so SYN requests are repeatedly sent until he gets a reply from the sender. This halfway communication floods the internet at a certain point of time with several SYN requests.

This deals with the IP packets such as large-sized and overlapping fragments of the IP packets. It uses the vulnerabilities in the operating system like Windows NT and Linux to crash it.

IP Spoofed attack is used to attack a large number of computers with a number of invalid requests of a certain type.

This technique id is implemented in two ways:

It is also used to bypass IP-based authentication.

Permanent DoS attack is used for hacking the system of an authenticated user.

This particular technique is used to crash the system by targeting hardware support. For its mitigation, it requires total re-installation or replacement of the hardware.

This involves multiple machines to flood the bandwidth of the victim.

Multiple machines can produce more traffic than a single one which in turn will deny identifying the attacker machine to turn it off.

Here, the attack gives instruction to the clients connected peer to peer to discontinue and disconnect their network and set connection with the targeted system.

It is better to understand that DDoS attack prevention is a fallacy. There is no specific technique defined for preventing it, the only thing you can do is to measure the damage caused due to this attack. Even a Firewall cannot provide sufficient security against DDoS attack.

As DDoS attack is difficult to identify and stop there are some facts taken into consideration such as:

Though these measures can be applied to prevent major damage due to a DDoS attack, some limitations have occurred so far which in turn lead towards the Cloud-Based DDoS Prevention.

Presently, Incapsula is the most popular cloud-based solution to cure a DDoS attack. It provides protection for your application along with the DNS services and network infrastructure. This solution fights all types of DDoS attacks mentioned above.

Few highlights of Incapsula are:

Another one is Cisco Solution Set which helps to detect all types of DDoS attacks including the ones that were unknown previously. This particular solution provides two-way protection based on two components.

Cisco Traffic Anomaly Detector (TAD) for analyzing the attack and Cisco Guard XT to protect the network and notify once the target is under attack. This solution filters the network traffic, blocks suspicious and irrelevant data packets and passes on the accurate and reliable packets to the recipient.

A DDoS attack uses network vulnerability which ultimately slows down the system performance and floods the traffic on the internet. This technique is beneficial for the intruders those who want the legitimate user to compromise with the security of his important and sensitive data.

A DDoS attack could not be detected easily and its prevention is almost like searching for water in the land of desert. So the only cure is to measure the damage caused by it and take measures to recover it.

Recently some cloud-based tools are being introduced to perform this task but still, this attack continues with maintaining its severity.

Hope you gained a clear knowledge of a DDoS attack and how to safeguard your system from it.