This tutorial explains PL SQL Exception Handling and related concepts like types of exceptions, user-defined and system-defined exceptions, how to raise an exception, etc:

In PL/SQL Datetime Format of PL/SQL series, we learned about some useful functions around Datetime, Timestamp, and Interval

In this article, we will discuss exception handling in PL SQL. Also, we shall explore the advantages of exceptions and how to raise them.

Let’s start with the learnings!! 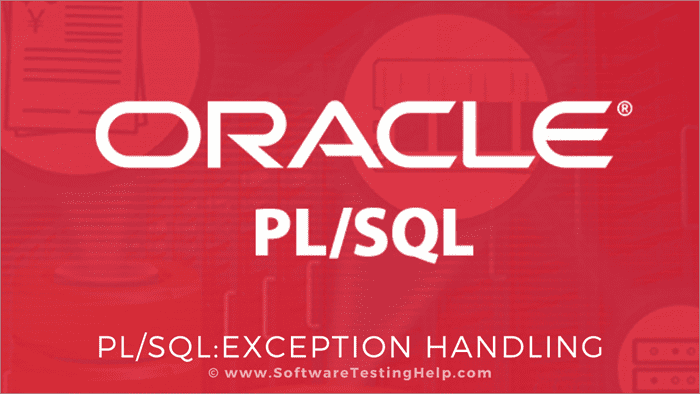 An error or a warning event is called an exception. It is encountered during the run time execution of the PL/SQL program. PL/SQL has mechanisms to handle these exceptional conditions with the help of the EXCEPTION block of code where it is defined how to counter the error condition.

There are two types of exceptions. They are listed below:

Some of the popular System defined exceptions are out of memory and division by zero, having names like STORAGE_ERROR and ZERO_DIVIDE respectively. User-defined exceptions are declared in a package, subprogram, or within the declaration section of the PL/SQL block of code and should be assigned names.

Once an exception occurs, the natural flow of execution is halted, and then the execution points to the exception section of the PL/SQL code. While the system defined exceptions are thrown by default, the user-defined ones have to be thrown explicitly by the RAISE keyword.

Thus the exception handling helps to deal with the errors that are encountered during the run time execution and not while compiling the program.

The advantages are listed below:

The default exception is carried out with WHEN others THEN.

Let us consider a table which is named CITIZEN.

We have created the CITIZEN table with the help of the SQL statement given below.

Insert values to this table with SQL statements given below:

The output of the above code: 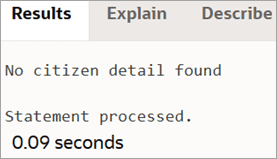 In the above code, as there are no citizens with age 9 in the CITIZEN table, a runtime exception is raised.

An exception can be raised by the developers explicitly with the help of the keyword RAISE.

The syntax for exception raising:

Here the exception_n is the name of the exception that we are raising. In this way, we can raise both user-defined and system-defined exceptions.

The developers can build their own exceptions and use them for handling errors. They can be created in the declaration part of a subprogram and can be accessed only inside that subprogram.

An exception that is created at the package level can be used whenever the package is accessed. A user-defined exception can be raised by using the RAISE keyword.

The syntax for a user-defined error is:

Here, the exception_n is the name of the exception that we are raising. Thus we can declare an exception by giving a name followed by the EXCEPTION keyword. An exception can be declared in a similar manner like variables are declared. However, an exception is an unexpected condition and not a data item.

Scope of Exception in PL/SQL:

The rules of scope for PL/SQL exception are listed below:

Let us again consider a table which is named CITIZEN.

The output of the above code:

In violation of database rules or going beyond the system-dependent threshold, an internal exception is thrown automatically. All these errors have a unique number and every exception is defined as a name. For example, PL/SQL throws NO_DATA_FOUND predefined exception when a SELECT query fetches no rows.

All the predefined exceptions of PL/SQL are declared in the STANDARD package which deals with the PL/SQL environment.

Q #1) What is a predefined exception in PL/SQL?

Answer: A predefined exception is thrown by PL/SQL automatically if there is a violation of the rules of the database by a program.

Q #2) What is PL/SQL exception handling and why it is needed?

Answer: An error or unexpected event in the program is called an Exception. It halts the normal flow of execution of the program. In PL/SQL, the exception is handled within an EXCEPTION block in the code and proper action against the exception is described inside that block.

Q #3) What is meant by exception handling?

Answer: It is the method of responding to unexpected events that may occur while executing the code.

Q #4) What are the two forms of error handling?

Q #5) What is the difference between error and exception?

Answer: Exceptions are incidents that are handled with the help of try/catch block and can be encountered both in the compile-time and run-time of the program execution. The errors, on the other hand, are encountered at the run time only.

In this tutorial, we have discussed in detail some basic concepts of PL/SQL that are essential to managing the exceptions in our programs.

We have covered the following topics listed below:

In the next tutorial, we shall discuss the PL/SQL transactions, OOPS concepts, and many more connected topics.