This tutorial explains different methods to take a screenshot in Windows 10 and other versions. Select a suitable method to screenshot on Windows:

Screenshot means taking an image of the content on the screen. It could be a part of the screen or the entire screen, and some additional tools can help the user to enhance the quality and output of the screenshot. Screenshots have become very popular these days as they help to capture images that can be used as references at a later point in time.

The increasing popularity of screenshots is widely spread and has proven to be very useful while creating a training or product manuals, troubleshooting or simply creating interesting reading content. 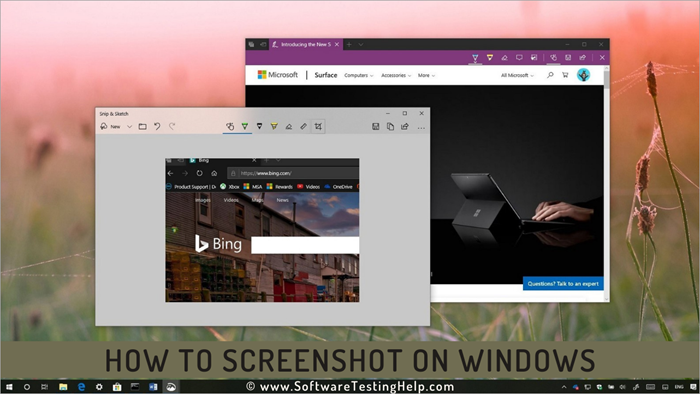 In this article, we will talk about How to screenshot on Windows. We will discuss numerous ways through which users can take screenshots of either the entire screen or a part of it as per their requirement. We will also talk about how taking screenshots is different for different versions of Windows i.e. Windows 10, Windows 8, and Windows 7.

How To Take Screenshot On Windows 10

The first and the simplest method to take a screenshot is by using the Print Screen key (PrtScn).

Let us look at the steps below:

#1) Keep the image/screen which needs to be captured open and press the PrtScn key. This key is available on the top right corner of the keyboard. 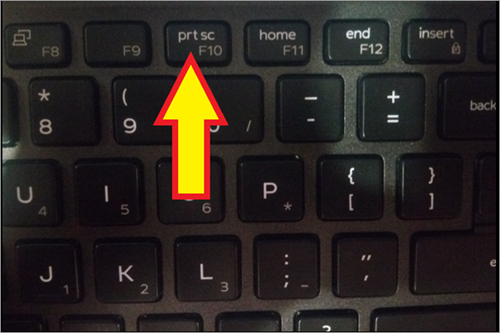 #2) Users can use this option to copy the entire screen and use tools like MS Paint or MS Word to paste it and make desired changes after pasting the copied content. These tools offer a variety of features to enhance the quality of the screenshot. Users can use Windows shortcuts like Ctrl+ V to paste the content on these tools.

Using PrtScn can have some alterations when used along with other keys. Following are some other keys which can be used with PrtScn:

This is explained in the image below: 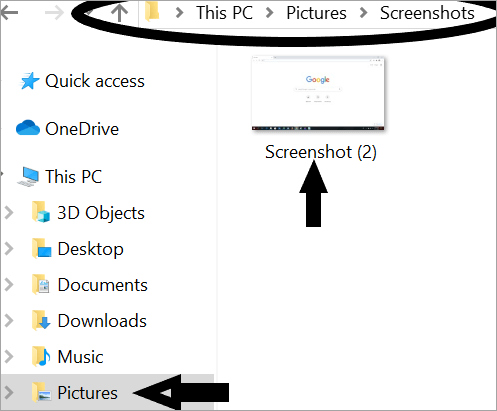 Windows 10 also comes with yet another interesting feature called the “Snipping Tool” which allows the user to take a screenshot of a part of the current window. Let us see how this tool works.

#1) Click on the search icon and type Snipping Tool. Alternatively, one can also find the Snipping tool under Start Menu> All Programs> Accessories. 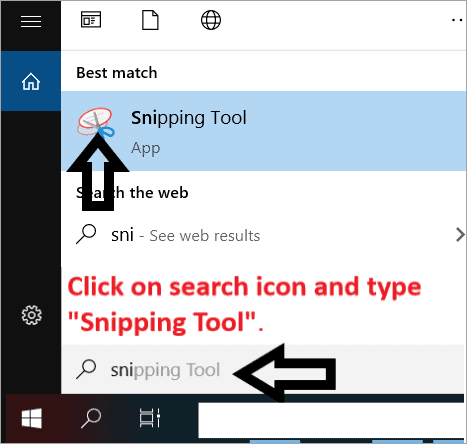 #2) Once the Snipping tool is open, click on New.

#3) Click on the drop-down under Mode and select Rectangular Snip or Free from Snip.

#4) Once the screenshot is taken, users can easily save the file at any location of their choice. This drop-down has two other options apart from Rectangular and Free from snip. These options are–Window Snip and Full-Screen Snip. Window snip allows the user to select a window on the screen. It could be a dialogue box as shown in the screenshot above.

Full-screen snip, as the name suggests, allows the user to capture the entire screen.

Screenshots captured as a snip are copied to the Snipping tool window. Users have an option to make changes and can also save the file.

The snipping tool also has another interesting feature called Delay. This feature is available in Windows 10 and it allows the user to capture screenshots after a delay of seconds as chosen. 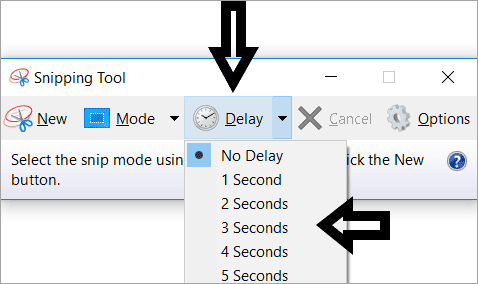 Another extremely popular way to take a screenshot in Windows 10 is through the Game bar. Let us look at the steps followed for this method.

#1) Click on the Windows key and G together. This will open the Game bar. The settings for the Game box can be customized by clicking on Settings> Windows Settings> Game Bar 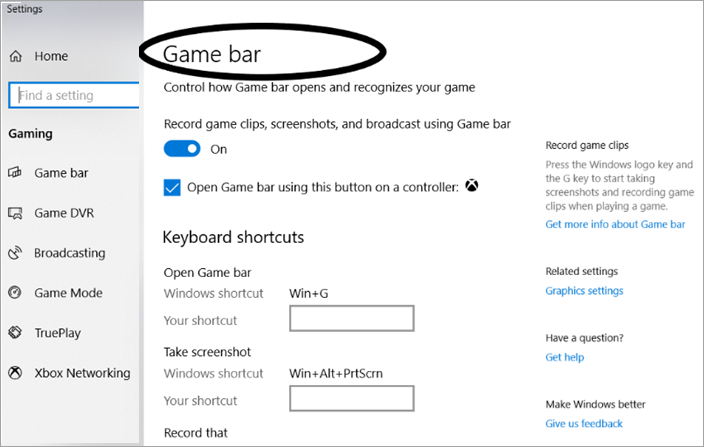 #2) Click on Yes, it is a game on the dialogue box that pops up.

#3) Click the camera button to take a screenshot. A quick path to the location of the screenshot is also displayed on the screen. Windows shortcut to the camera is Windows key +Alt + PrtScn.

#4) These screenshots are saved as PNG format in the location C:\Users\( Username)\ Videos \Captures 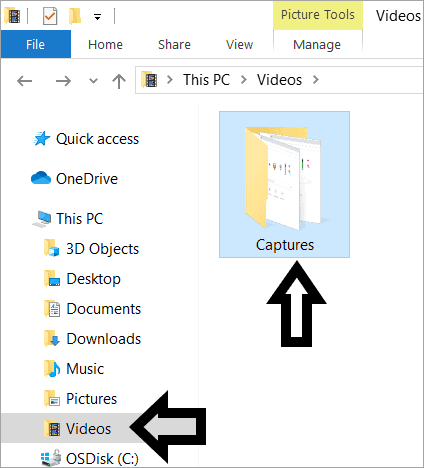 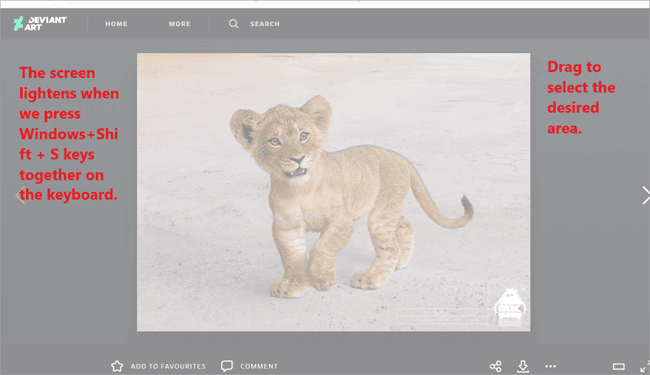 #2) Alternatively, you can also first open the Snip & Sketch application in Windows and then take the snip.

Type snip & sketch in the Windows search bar and open the app. 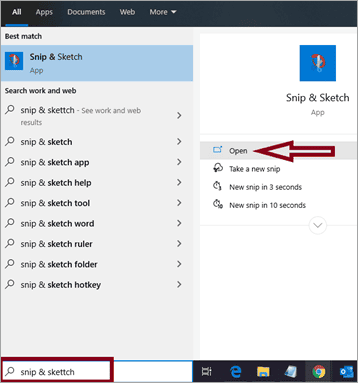 You will see the snip & sketch app opened. Click on ‘Snip now’ to capture the screenshot.

This will take you to the snip mode as seen below. You can take rectangular snip, free form snip, windows snip, or full screen snip. 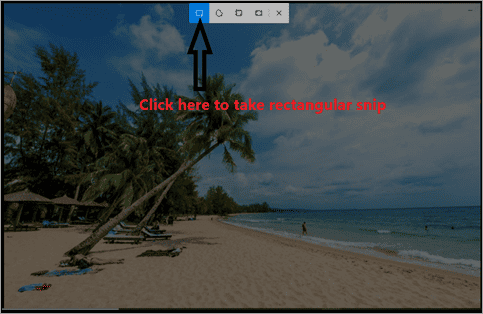 #1) There are a few Surface devices where screenshots of the entire screen can be taken by pressing buttons. This process is almost the same process as taking screenshots on a phone or a tablet. We need to use the following keys together-

The touch button at the bottom of the screen, which bears the logo of Windows and the volume down button on the side of the device. The screen lightens a little and then the screenshot is captured in the folder Pictures and is saved under Screenshots.

#2) Some Surface devices which are touch screen enabled use Surface Pen to take screenshots of the entire screen. It is a simple process of clicking twice on the button at the back of the Surface Pen which opens Snip and Sketch and screenshots captured by edited.

We have looked at how to screenshot on Windows 10 using some inbuilt ways and features in Windows 10 for taking a screenshot. While unarguably, these tools provide a plethora of benefits and ease, they also have some limitations. In order to overcome these limitations, some users prefer to use third-party tools and software.

This software is not free but allows the user to explore numerous features.

Some of these tools are discussed below:

Snagit is offered by Techsmith. This software has been a renowned name in the market and is extremely promising in terms of high-quality screen capture for both audio and video content. It is compatible with OS like Windows and Mac.

Apart from this, there are a lot of third-party applications that have proven to be of excellent quality and give great outputs. Some of these are, 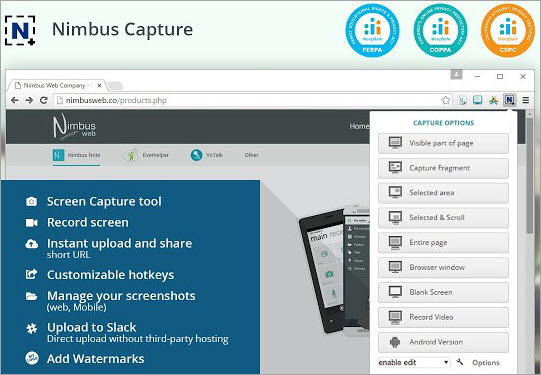 This is a free application and is available as an application in Windows. With the help of this application, users can take a screenshot of either screen, entire webpage, or a part of the screen. It also allows some interesting features for editing the screenshots, record videos and enabling the addition of comments on screenshots. 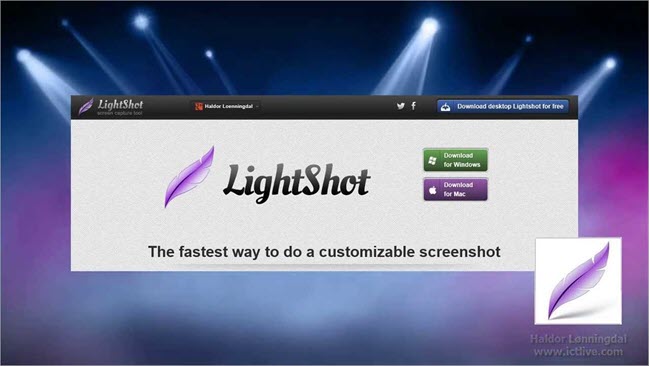 This is also a free application and users need to create an account (a free account). Users can use this application to add comments on screenshots. 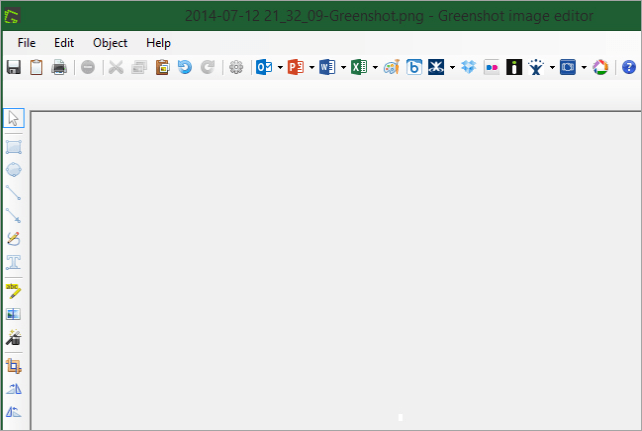 This is yet another user-friendly application which enables screen capture and image editing through a variety of easy-to-use features.

Thus we have seen how to screenshot on Windows 10. Let us now look at how we can screenshot in Windows 7 and Windows 8.

How To Screenshot On Windows 7

Windows 7 is yet another popular version of Windows OS and is known for its ease and user-friendliness. Windows 7 also uses PrtScn and Snipping tool as the most common ways to take a screenshot. The only difference between Windows 10 and Windows 7 is the location of tools which are used to edit the image like MS Paint.

Let’s follow the steps to understand how to screenshot in Windows 7.

To use PrtScn option to capture a screenshot, we need to follow the below-mentioned points: 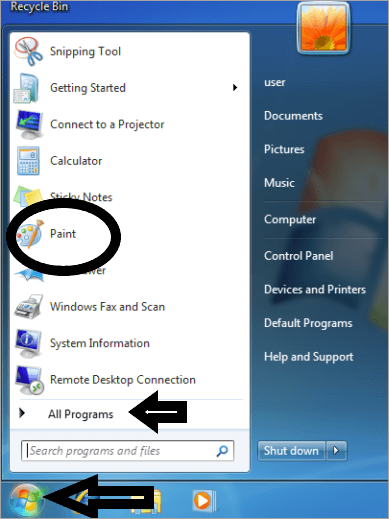 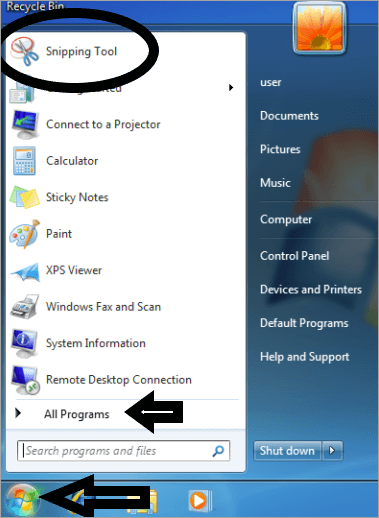 #3) Press the Alt+M keys and use the arrows on the keyboard to choose either a Freeform Snip or a Rectangular Snip to select and copy the required content. Alt + N keys can be used to take a new screenshot.

It is also possible to take a screenshot of the entire screen and save it if we do not want to use Snipping Tool or any other tool in Windows 7.

It is important to remember that this folder named Screenshots will only be created after the first screenshot has been taken using the tools or using the above method. The method of taking screenshots is more or less the same irrespective of which version of Windows we choose.

We will now look at how taking a screenshot can be different in Windows 8.

How To Screenshot On Windows 8

PrtScn is the most common method of taking a screenshot in Windows 8 as well. In Windows 8, the process of taking screenshots is simpler compared to any other version. This can be done in the following manner-

Press Alt + PrtScn keys together on the keyboard. This method helps us to capture a screenshot of a one-window instead of the entire desktop. The image captured then needs to be pasted on image editor tools like MS Word or MS Paint to make desired changes.

We can also copy and paste the shortcut for the Snipping tool on the desktop. On computers that have Windows 8 as OS, it is quite possible that some files are hidden. This is a default setting and is done to avoid any accidental deletion of these files. We need to follow the following path to unhid the hidden files.

Once the hidden files show up, we can follow these steps to create a shortcut for the Snipping tool.

Now that we have looked at how to screenshot in Windows (Windows 10, Windows 8, and Windows 7), let us look at some frequently asked questions about the same.

Q #1) How to save screenshots instantly?

Answer: When we press the Windows Key + PrtScn Key together on the keyboard, the screenshot is saved as an image in the Pictures library instantly. There is no need to paste the screenshot to any image editor tool.

Q #2) Why are screenshots not saved?

Next, we need to click on the Security Tab and then on Edit to enable permissions.

Q #3) How can we screenshot multiple pages in Windows?

Answer: When we want to take multiple screenshots in Windows, we can use a combination of some keys on the keyboard. Press Ctrl key + Alt key together and the PrtScn key. A red rectangular box is created on the screen and using the left key of the mouse, we can drag the rectangle on the scrolling window to select the desired pages.

In this article, we have covered details on how to take a screenshot on Windows multiple versions.

Also read =>> What is Compattelrunner.exe and how to disable it?

When we talk about taking a screenshot on Windows 10 and taking a screenshot on Windows 7 or Windows 8, we understand that while the primary methods and key combinations remain the same irrespective of which version of Windows we use, there are some variations with features of image editing tools and their location on the desktop and this largely varies depending on the version of Windows operating system.

We hope this article answered the queries about how to a screenshot on Windows. This article will be a helpful resource for users exploring the interesting world of screenshots.

Recommended reading =>> How To Change Mouse DPI In Windows