This tutorial explains what is Thread Testing, when, and how to perform it, types of thread-based testing, and challenges faced:

Thread testing is a software testing technique that is used to test the applications that are client server-based.

Thread based testing should be performed at the initial stages of Integration testing so that the key functions can be tested/verified for a specific task/program or thread. 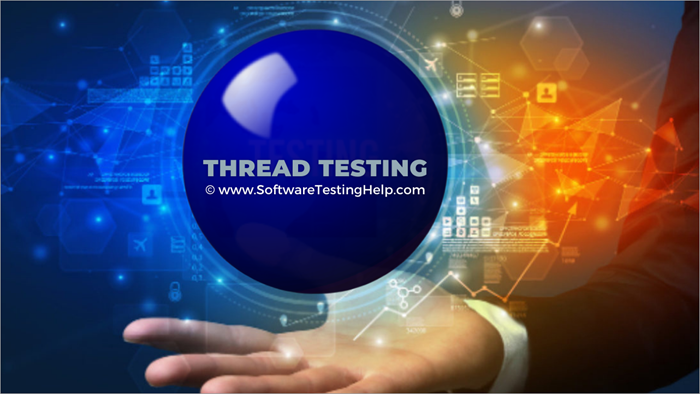 When the components are integrated, it is necessary to check if the system will work as expected or not and all the transactions would happen as per the requirement or not. Thus Thread based testing comes in to test the same.

This testing is done by integrating the threads progressively at all the levels starting from the subsystem to the complete system i.e. the whole system. All the system activities move forward with the threads only.

Thread definition helps to share the functional background and thread execution details between the developers and developers to testers.

A thread is the flow of control in a process. It is the smallest task of the system that can be run.

A web browser might have one or more threads running viz. one thread to display images and text and another thread to retrieve data. In certain cases, a single application must be required to serve all the processes.

Creating multi-threads is the best solution for the same, else multiple requests will be sent to the server by the client and it will take time to acknowledge the requests one by one. Multi-thread will help to respond to the requests simultaneously.

When And How Is Thread Testing Performed

It should be done at the initial stage of the System Integration testing.

Integration testing is performed by integrating different modules in a planned way. The integration plan is followed for the same that specifies the order in which the modules will be integrated to make the complete system.

Listed below are the techniques for executing Integration testing:

Let’s see each technique in detail.

The big bang approach is used for small systems only as all the modules are integrated and tested in only one go.

Any issue found during this approach is difficult to localize as the issue can be from any of the integrated modules. Therefore, debugging issues found are very expensive to fix in this approach.

The top-down approach is done using the stubs i.e. once the top-level module has been tested, the immediate subroutines are integrated and tested.

Stubs are the programs that simulate the effect of lower-level routines and are called by the routines under test. Thread testing uses a top-down approach.

This technique requires test drivers i.e. the program that calls the other modules and provides the same output as the actual product.

This technique is a combination of both top-down and bottom-up approaches. Hence it is called Mixed Integration Testing.

Types Of Thread Based Testing

Single thread testing tests one transaction at a time. The wait time for the client to get a response to its request could be a bit longer as it will be able to serve or respond to one client at a time.

This testing helps the tester to understand and test the logic of the program or written code.

Multi-thread testing tests several active transactions at the same time. In this case, separate threads are created for the requests of the client. Whenever a request is made, a thread is created to the service or responds to the request.

A transaction that was working fine in the single thread testing can fail while testing in multi-thread and also can interfere with other threads and functionalities and stop them to work as expected.

Multi-threaded applications are better than single-threaded as it improves the performance of the application. Multi-threading allows a number of resources to work on an issue/request at the same time.

Challenges While Doing Thread Based Testing

While performing thread-based testing, the tester faces several challenges that impact the performance, time, and cost of testing.

Multi-threading has many advantages as well as disadvantages. As a tester knowing the same helps them to test and break the testing process accordingly.

When multi-threading is done, the thread gets into a wait state if the resource is not available.

The waiting state might not change for the thread as the resource requested is held by other waiting threads. When such a situation arises that’s called Deadlock.

Difference Between Thread And Processes

Let’s understand the differences between Thread and Processes:

Difference Between Thread-based And User-based Testing

Answer: Thread based testing is a methodology that is performed during the early phase of integration testing. Threads or programs are integrated and tested incrementally in a subsystem and then as a whole system.

Q #2) Which testing is done first?

Answer: Usually bottom-up testing is done first and then top-down testing is performed.

Answer: Top-down is an integration testing technique where testing is done using stubs i.e. when lower-level components are not yet ready to test the integration, stubs (temporary modules) are created to get the same output as in the case of actual modules.

Thread based integration testing plays an important role in testing the major functionalities or the specific task or thread. This methodology is best for client server-based architecture.

While performing thread testing, the tester has to face many challenges, however has many advantages as well which makes it easy and reliable to perform. It let the testers to test all the transactions and verify if it is working as expected and as per the requirement.

It is impossible to test all the transactions/events to complete the thread testing because of which, it is divided into single and multi-thread types.