Infrastructure is shared among many projects. Infrastructure testing is the testing of hardware and software dependencies required to run software products. It helps to cover the product risks that relate to the target infrastructure.

What Is Infrastructure Testing?

Every software requires an infrastructure to perform its actions. Infrastructure testing is the testing process that covers hardware, software, and networks. It involves testing of any code that reads configuration values from different things in the IT framework and compares them to intended results.

It reduces the risks of failure. This testing incorporates testing exercises, procedures to guarantee that IT applications and the fundamental infrastructure are tuned to deliver on execution, adaptability, unwavering quality, accessibility, performance, and scalability. The aim is to test infrastructure between test environments, test tools, and office environments.

Why Infrastructure Testing Is Needed?

Organizations spend many dollars to make sure their business applications are tested to perfection. However, the basic foundation i.e. infrastructure that hosts and conveys these applications is once in a while tested and generally underestimated.

Infrastructure failures arise when no testing is planned on scalable infrastructure. Therefore, to prevent disruption and last-minute problems, this testing needs to be performed.

This testing is needed to identify defects that were not efficiently found during different testing processes. It becomes important to analyze the software application whenever hardware and software resources are changed. It is done to analyze the system efficiency and performance.

What Are The Benefits Of Infrastructure Testing?

The planned and exhaustive approach of Infrastructure Testing gives many benefits to a software product as well as organizations.

Few of the benefits are enlisted below:

Let’s look at a few challenges that companies face when they seek to adopt Infrastructure Testing.

Test environments or resources are positioned in topographically remote locales, making the test teams rely upon support groups at the area to manage challenges related to equipment, hardware components, software components, networking, etc. This frequently requires some investment with respect to time and causes delays, particularly where the teams are situated in different time zones.

#2) Absence of a dedicated team

Lack of knowledge among the team is a major challenge to perform this testing. A dedicated team is required to maintain information related to all activities including schedules, plans, coverage, status reports.

Many times test environment issues could not be resolved and needs investigation. Coordination with concerned teams is required until the issue is resolved.

#4) Maintaining environments at one place

Maintaining a common storehouse of test-environments, their old compatibility, as well as the latest versions, pose a major challenge while performing this testing. Connectivity details and configurations of all versions are not maintained.

Few activities involved in this testing require manual work as no tools are available. This leads to human error and delays in the process.

Most people are still not aware of the implementation and processes. Improper knowledge and understanding often lead to difficulties in implementation. Lots of new problems arise that may affect the process to be stable.

There lies a big gap between team locations. This usually leads to a lack of transparency and poor teamwork.

Who Can Perform Infrastructure Testing?

Various teams are involved in this testing type. These are explained below:

System Administrator team often test network-level infrastructure. Team design and document test cases based on their experience. They are responsible to ensure that the applications are not impacted after any change in the network.

This team plays a very important role. They are involved at an early stage and are responsible to set test environments as per the requirements. They participate in test planning and maintaining infrastructure environments.

QA team is responsible to run regression test. They are also involved in integration testing. They perform testing on different test environments that are created as per different infrastructure.

The project manager is responsible to handle the project. They are involved in planning, designing, documentation of test cases that are required for this testing type. A Project Manager is in sync with all the teams.

When To Perform Infrastructure Testing?

There is an urgent need to perform this testing whenever any infrastructure-related changes are introduced.

Examples of such changes are:

Sometimes this testing type becomes more important when Database or Data Centre migration is encountered. More focus is needed when there are diverse and rapid changes in application and when infrastructure migrations are involved.

It is also performed when the support of new devices for software is introduced.

We have different modules in this. Few of them are listed below:

The main objective is to test the quality of servers, desktops, Operating Systems, and hardware. Server/Client components are tested to ensure the performance of infrastructure is improved in the production environment. It also includes testing of installation or uninstallation of applications, browser compatibility testing, integration testing with different versions of OS and user settings.

All server/client related changes like up-gradation, configuration changes are already tested on QA setups, so this ensures that there will be less impact possible in the production environment. Also, different OS versions will be tested before deploying in production. Moreover, if anything failed in production, fallback procedures are tested beforehand to ensure backup.

Information and data are mostly stored on virtual servers and these servers are kept and managed by Cloud computing vendors such as AWS.

The network is the most important part of the infrastructure of the application. The network helps in communication between servers, clients, and other networks. Networks have different modules such as proxy servers, infrastructure for Internet connectivity.

The main objective is to control and manage any network-level issues such as excessive resource usage, server downtime, system configuration, the infrastructure required for operations, Operating System patches.

Network-level infrastructure testing improves recovery time. It ensures the backup and restores mechanisms. It helps in the security of applications as well.

Testing infrastructure while installing/uninstalling/deployment ensures that the application can be installed over the network at a particular time. It makes sure that any patch can be later installed or not. Helps in improving the storage required by the application.

Test-Driven Development or TDD framework is a method to first write test cases based on the requirement documents and then implement the functionality according to the test.

TDD approach helps in improving the complexity of the project. Any changes to infrastructure are tested before pushing to production. Different possible configurations can be implemented as tests are already designed.

Chef, Puppet, and Ansible are different tools that serve the same purpose. These tools are used in deploying and configuring different servers required for an application. These tools serve great help when there are complex tasks related to infrastructure. It becomes easy for the team to execute tasks on multiple servers together using these tools.

Features: Chef supports Ruby Domain-Specific Languages. Therefore, it becomes difficult for non-developers to learn this tool. Despite being difficult for language support, this tool is highly available. Chef follows the master-slave configuration. In the master-slave mechanism, the primary server i.e. chef-server can be replaced by the backup server if in any case failure is encountered.

We can deploy applications, configure infrastructure, and also configure the network with Chef. It is not highly secured.

Features: Puppet is built with Ruby and supports DSL and Embedded Ruby. A programmer can only manage the configuration if the Puppet is selected to be used. The system administrators team is also aware of the configurations of this tool. It follows master-master architecture. If an active master experiences failure, another master can replace it.

Puppet is useful in the scalability of machines, in setting different configurations for every host. If any change is made in the configuration, this tool helps to make changes globally. It is also not so highly secured tool. 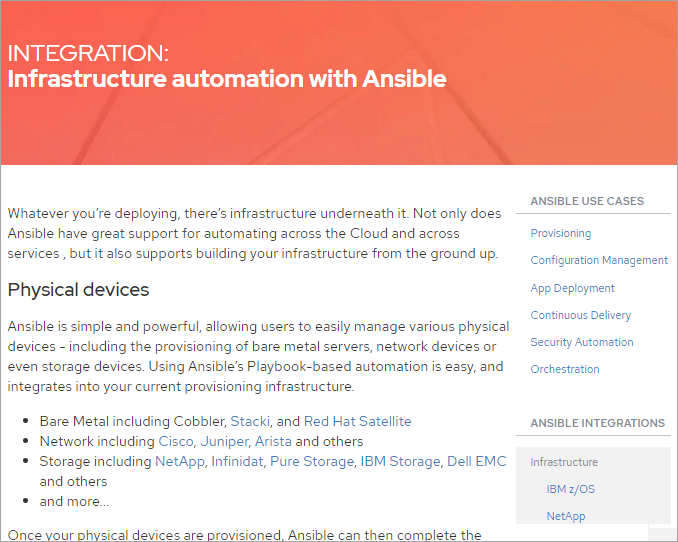 Features: Ansible is written on Python and also supports YAML command scripts. Python is human readable and therefore this tool is ideal for system administrators. It runs with a single active node but in case of any failures, it has a secondary node too.

Ansible is highly scalable, i.e. it could manage a large number of nodes without any issues. As compared to Puppet, Ansible is more convenient in terms of scalability. Unlike Chef and Puppet, it is a highly secured tool with SSH.

Price: Its price is much lower than Puppet and Chef approximately $10k/year for up to 100 nodes.