Through this article, we will take a look at every aspect of Crowdsourced Testing and QA outsourcing. This guide is useful for companies looking to Crowdsource their testing work and testers who want to make a career in Crowdsourced Software testing to bring in some extra income.

Somehow or other we all have thought of adding extra income to our daily work income. And something extra, no matter what, always brings a smile and is always welcomed.

Getting known for your skills and experience is a feeling of proud for any working professional. Learning and getting acquainted with new testing tools is adding experience, knowledge and income for testers but every tester knows that their power of out of box thinking is what they are actually paid off. 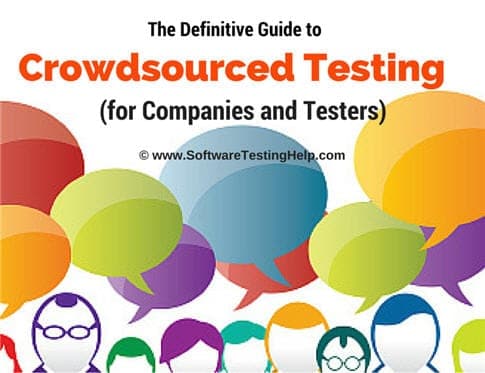 Crowdsourced Software Testing is one such form of testing where you are paid off for your testing capabilities.

The name “Crowd” itself signifies its meaning. The crowd here refers to not just any individual but they are a group of individuals across the globe or selected few on the basis of their profile, professional background, qualification, devices on which they are able to test and other parameters.

What is Crowdsourced or Crowd testing?

In the recent years, CT has gained much significance as it not just only the way to get the feedback, real insight about the product’s quality or to find bugs/defects but also the testers are getting paid for their efforts. The flexibility provided to the testers in terms of pay, time, work location, diverse range of testing options for testing a diverse range of applications and much more have convinced many testers to select Crowdsourcing Testing as their second job.

Nowadays, easy access to the internet through the web or mobile devices, awareness of social media has played an important role in helping individuals to use their technical knowledge, thoughts, permutation of scenarios and experience as a part of CT to achieve their goals which is the quality improvement.

In many cases, “Crowdsourced tester is proved to be more realistic tester than an experienced tester”.

People’s first impression about Crowd Sourcing and its actual meaning:

It is often misinterpreted with the concept that CT is all about engaging a crowd of people to test a diverse range of applications on the basis of their skill set and the tester are paid for each valid bugs/defects they report.

Well, definitely this is one phase of Crowdsourced Software Testing but it’s not just that, other phases include: 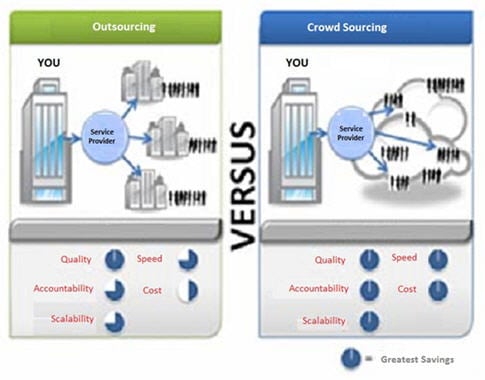 “More heads are better than one”. Task results turn into superior quality when there are combined ideas, skills and participation of people from varied background. This defines the term ‘Crowdsourcing’.

Crowd Sourcing is the collective effort from a crowd of people working at different workplaces; basically, the process is online, leading to significant results. Testers involved in Crowd Sourcing are paid only when their work is done or say when the bug found is validated.

The most famous example of Crowd Sourcing is “Wikipedia”. Wikipedia, the most comprehensive encyclopedia is the result of the information created by writers and editors from the crowd.

On the other hand, QA Outsourcing is the collective effort of the testers working in the same workplace under same conditions. In these cases, unlike Crowd Software Testing scenario, testers always get paid irrespective of their output i.e. a number of bugs found or validated.

Difference between ‘Crowd Sourcing’ and ‘Outsourcing’:

Let’s look at the below diagram which explains the major differences which are applicable for Crowdsourced testing and outsource testing QA: 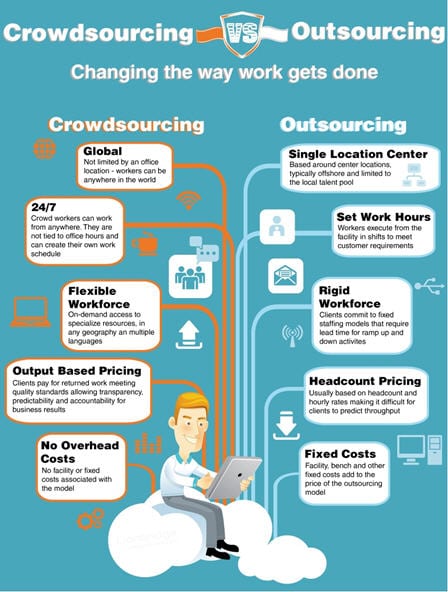 Crowdsource Testing: How does it work?

Crowdsourcing Testing is a means of software testing where ‘Talent’ is recognized as ‘Service’. In any Crowd Software Testing company, the whole testing process is managed by a qualified project manager.

The work of the client is to enlist all requirements, including device configuration required for the testing project as well as the necessary skill set of the testers suitable for that particular project. The testers complete their profile providing all necessary information along with their experience, skill set, availability of devices, background, qualifications, etc. Sometimes, few companies take a trial test or assessment of the testers to determine if they are suitable for the particular project on the basis of their skill.

After assigning a project to the testers who are suitable for that particular project, they are provided with instructions, detailed test plans, scripts etc. Testers record their observation while execution or say, performing given task, finding defects, etc and in turn, they are rewarded with incentives on the basis of the quality of the output delivered. Some Crowdsource companies have also rating systems which determine the quality of job delivered. Discussion of relevant issues and concerns is also done through forums.

So, to summarize, Crowd Sourcing is a 5 phase process. This is explained in below figure: 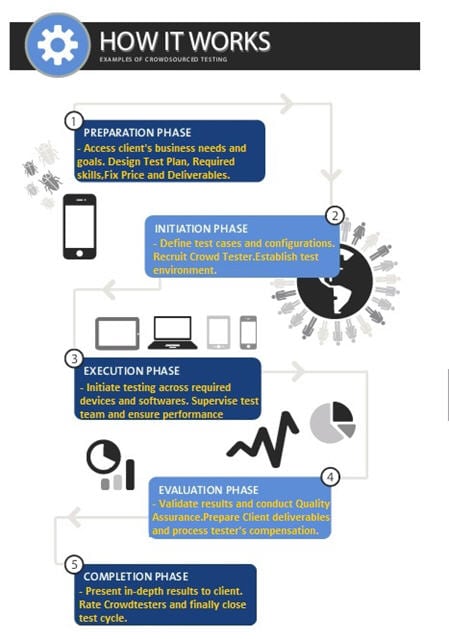 Now let’s look at the Benefits and Limitations of this type of testing:

There are multiple Advantages of this type of testing. Few of them are listed below:

With multiple benefits, there are few limitations too of Crowd Sourced QA testing. Enlisted below are few:

In many cases, Crowd Software Testing act as a means to ensure all the testing areas are covered. CT does not follow any rule. The crowd is allowed to test the software with ‘test in all’ approach, without following any procedure, as is done in any testing organization with limited test engineers. However, it’s not a replacement of traditional test method but it acts as an add-on to test the software before production release. CT can be beneficial in early phases of testing too.

Where is Crowd Sourcing more beneficial?

Enlisted below are few cases where Crowd Source Testing is most useful:

“Crowdsourced Testing is often referred to as Beta Testing”, and its true also.

Beta testing is the second form of software testing where the final application is tested for the last time for any left out issues and concerns before production release. Through Beta testing, real users are able to use the application for the first time, other than the development team members, before the final release of the product. It can be taken as the last chance to introduce any new improvements and fix left out issues.

Beta testing was an extra expenditure earlier because involving real users before product release was extra to the pocket but with a tech-savvy crowd and through this testing technique, this challenge is easily fulfilled.

Nowadays, Crowd-Sourced Software Testing has become the first option for the developers to run their latest application.

Let us understand this with the help of few live examples where Beta testing of live application is applicable to this testing:

This type of Testing is more suitable to user-centric applications. So, many companies release a beta version of their applications to improve their final product.

How to Choose the Best Crowd Sourcing Companies?

Crowd testing company is not just a platform where client meets their testers. Before choosing the right CT company, it is mandatory that the client company is capable enough to perform extensive project-related evaluations. Enlisted below are few criteria which should be considered while choosing the best company:

Digivante – As one of the world’s leading crowdsourced testing companies, with high-profile clients such as Specsavers, DFS, GymShark, and Calvin Klein, Digivante sets the standard for functional, usability, and conversion testing.

Unlike many other testing companies, Digivante’s large-scale testing community is filled with dedicated, expert testers who are reviewed and graded frequently, ensuring your app, eCommerce, or website is tested by only the most high-quality, professional testers.

Using this community, Digivante performs 24 days’ worth of testing in just 24 hours, with results then undergoing secondary authentication by in-house teams who then validate and prioritize the defects in order of severity, through video and screenshot evidence, ensuring your internal teams address the most impactful issues first.

If you know any other good Crowdsourced testing company that you want to list here – please contact me.

How to Avoid Failures in Crowdsource testing

Sometimes “Crowdsourcing goes wrong” and expectations comes out as unexpected

Such failures can be avoided by keeping few points in mind:

Crowd Sourcing as a Career Option:

We have seen various aspects of CT throughout this article. Many testers think to build a second career in Crow QA Testing.

Suggested below are few checks that should be kept in mind while choosing Crowdsource testing as a career:

Thus we can conclude, Crowdsourced Testing is the most reliable, cost-effective and fast way to determine product’s quality, making it bug-free. It’s a unique way of involving hired consultants, skilled users and professionals for testing diverse applications under real-world conditions.

Testing applications with user’s perspective and with the real crowd under real-world conditions is the best way to build successful software.

Let us know if you need more information on any topic that is not covered here. Feel free to suggest good Crowdsourcing sites if you know.