In this article, we are going to discuss details about destructive testing and non-destructive software testing.

We will learn about them one by one and will also see the differences between these two testing types at the end of the article. 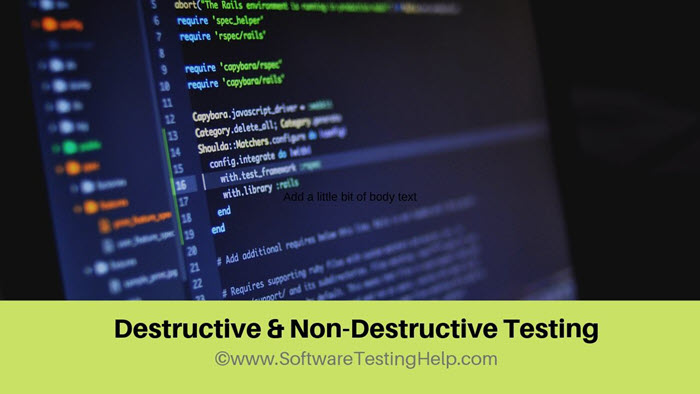 What is Destructive Testing and What Are Its Benefits?

Destructive Software Testing (DST) is a kind of software testing that tries to cause a part of software application to fail in an uncontrolled way, to test its robustness and detect the point of failure. 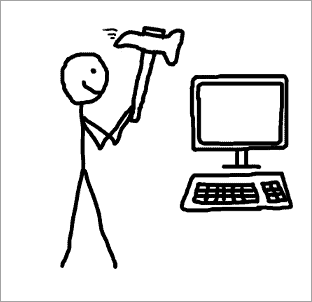 Contrasting with other conventional type software testing methods that check the functionality of the software, this method inspects the unpredictable user behavior within the software. So, it enables us to uncover software defects that are generally not encountered by average users.

Destructive testing is carried out under the most rigorous operating conditions and it keeps on going until the application breaks. The key idea of this testing is not only to uncover the design weaknesses if any which possibly will not be revealed under normal working conditions but also to discover the service life of the software product.

Steps to Perform This Testing

For this testing, it is good to have some knowledge of the original requirements of the software. This aids in coming up with a good testing strategy.

What do you verify in Destructive Test?

There are several ways through which destructive testing can be carried out:

Get the application reviewed by a fellow tester who is not familiar with the software. This will help in finding some hidden points of failure which were not visible to you as a tester.

3) Get test cases reviewed by the business:

The end-users and other stakeholders can sometimes think of valid test scenarios that a tester may have missed. So, getting the test cases reviewed by the business can increase your test coverage.

Carry out exploratory testing with the help of run sheets. It will help you to know what is tested, repeat the tests and control the test coverage.

5) Feed the system with improper data:

You can supply invalid input to the application. This may include corrupt data, the wrong sequence of steps on the user interface, etc.

You can also use any other sources or ways to break the system and analyze for different scenarios. The good thing is that the user story of destructive software testing does not necessarily ask for ‘requirements’ and ‘specifications’, so you can try out any suitable way to conduct this testing.

Destructive software testing can be conducted through various techniques like:

What is Non-Destructive Testing and What Are Its Benefits?

Non-Destructive Testing (NDT) is described as a software assessment technique that entails interacting with software correctly. Unlike destructive software testing where we look for exception paths, in non-destructive testing, we look for happy paths or golden paths. NDT is also known as positive testing.

For example, if there is an input box that accepts a number within 1-999, then a positive test case would be to enter a number within this range and verify the functionality of the input box.

In NDT, we have a well-defined test case using a known requirement, which executes without any error or exceptions and produces the desired output. It gives the expected results and verifies that the software is working as expected.

When to Perform This Testing

Non-destructive testing is done with the positive testing or happy path testing approach to verify that the software functionality is meeting the customer requirements. It involves interacting with the software correctly.