What is Reliability Testing?

Reliability is defined as the probability of failure-free software operation for a specified period of time in a particular environment.

Reliability testing is performed to ensure that the software is reliable, it satisfies the purpose for which it is made, for a specified amount of time in a given environment and is capable of rendering a fault-free operation.

In this mechanized world, people nowadays blindly believe in any software. Whatever result the software system shows, people follow it believing that the software will always be correct. Indeed that is a common mistake that we all do.

Users think that the data shown is correct, and the software will always operate correctly. This is where the need for reliability testing comes into the picture. 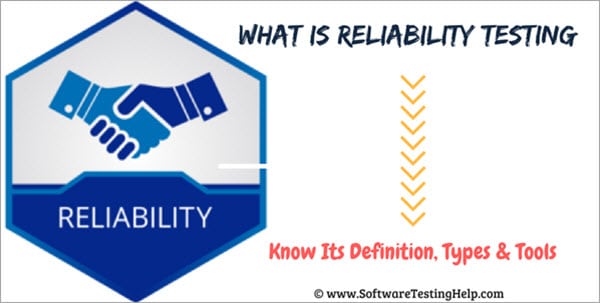 According to ANSI, Software Reliability is defined as the probability of failure-free software operation for a specified period of time in a particular environment.

If a software product is operating in a failure-free manner for a particular period of time in a specified environment then it is known as reliable software.

Recommended Read => Tips and Tricks to Find a Bug

What is Reliability Testing?

In today’s world, Software Applications are being used in each and every aspect of our life including healthcare, government sectors, telecommunication, etc.

Hence, we need to have accurate data in which the users can rely on. Reliability testing is concerned with the quality of the software and the standardization of products. If we are able to repeat the test cases and if we get the same output consistently, then the product is said to be ‘reliable ‘.

Reliability testing is performed to ensure that the software is reliable, it satisfies the purpose for which it is made, for a specified amount of time in a given environment and is capable of rendering a fault-free operation.

When do we use Reliability Testing?

Given below are the scenarios where we use this testing:

Test cases should be designed in such a way in which it ensures the total coverage of the software. The test cases should be executed at regular intervals so that we can cross check the current result and the previous result and verify if there is any difference between them. If it shows the same or similar result then the software can be considered as a reliable one.

Also, we can test the Reliability by executing the test cases for a particular amount of time and check if it is showing the result correctly without any failures after that particular period of time. While doing Reliability Testing, we must check the environment constraints like memory leakage, low battery, low network, database errors, etc.

Fundamental Types to Gauge the Reliability of Software

Enlisted below are few fundamental types to gauge the Software Reliability.

Consider the following situation in which we are testing a functionality, Say at 9:30 am and testing the same functionality at 1 pm again. Later, we compare both the results. We are getting a high correlation in the results. Then we can say that the test is ‘Reliable’. Usually, a Reliability of 0.8 or more means that the system can be considered as a highly reliable product.

Here, it is very important to note that the length of the test remains the same if we have 10 steps in a test case, then the number of steps will remain the same for performing the test next time.

Consider the particular Example of a person attending an ‘IQ Test’ and scoring 144 points. After 6 months he takes the same ‘IQ test’ and scores 68 points. In such a case he cannot be considered as a ‘reliable’ source.

2) Parallel or Alternate form of Reliability

It is called so as the testers are conducting the test in two forms at the same time.

Inter-Rater Reliability is otherwise known as Inter-Observer or Inter-Coder Reliability. It is a special type of reliability which consists of multiple raters or judges. It deals with the consistency of the rating put forward by different raters/observers.

Note: These ratings will highly depend on the general agreement among the different judges/raters. Once you have a series of observation done, then you can decide that there is a kind of stability across the scores and after that period of time, we can say that they are consistent.

Consider the Excel sheet above and view the ratings given by two different raters Rater1 and Rater2 for 12 different items. Rater1 has independently rated on the scoring board. Here, using the scoreboard, we are now going to calculate the percentage of the agreement between the two raters. This is called inter-rater reliability or inter-rater agreement between the two raters.

The various types of reliability testing are discussed below for your reference:

This testing determines suitability, i.e. it tests if the application performs as expected for its indented use. Here, it will check the Interoperability of an application for testing it with the other components and the system that interacts with the application.

It ensures the accuracy of the system to check if there are no bugs found during Beta testing.

Load testing will check how well the system performs when compared to the competition system or performance. It is also based on the number of concurrent users who are using the system and the behavior of the system to the users.

The system must respond to the user commands with less response time (say 5 seconds) and meet the user expectations.

In Regression testing, we will check if the system is performing well and no bugs have been introduced as a result of the addition of new functionality in the software. It is also done when a bug has been fixed and the tester needs to test it again.

During the different Phases of SDLC (Software Development Life Cycle) many questions about the future of the product may rise by its the users such as ‘if they are reliable or not’. We need to have a clear solution for such questions. With a proper model, we can predict the product.

The two types of models include:

In Predictive testing, we predict the result with the historical data, statistics, and machine & learning. All we need is to write a report. In a predictive model, we get only some historical information. Using this info, we can construct a scatterplot and draw an extrapolate line to the existing historical data and we can predict the upcoming data.

This type of model is performed before the development or testing stage itself. In Estimation Testing, apart from using the historical data, we will use the current data. Here we can predict the reliability of a product in the present time or future time. This type of testing is performed during the last stages of the Software Development Life Cycle.

Testers need to determine the Estimation of Reliability of a Software. This will lead to the use of various tools in Software Reliability.

By using a standardized tool, we can:

There are various tools that are available in the market for measuring software reliability, and some of them are mentioned below:

CASRE (Computer Aided Software Reliability Estimation Tool): This is not a freeware, we need to purchase it.

CASRE reliability measurement tool is built based on the existing reliability models which help in better estimations of the reliability of a software product. The GUI of the tool provides a better understanding of the software reliability and it is very easy to use as well.

During a test, it helps the users to find out if the reliability of the system is increasing or decreasing while using a set of failure data. Carse provides a 2D view by plotting the number of failure against the test Interval time and thereby a user can obtain a graph representing the system as shown in the below Figure. 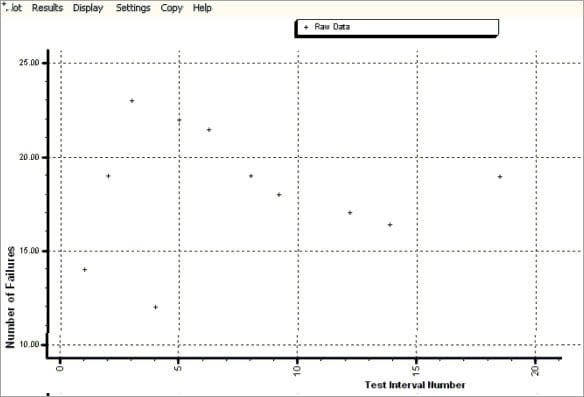 Reliability Testing is costly when compared to other forms of Testing. Hence, in order to do it cost-effectively, we need to have a proper Test Plan and Test Management.