In this article, we will discuss and explore Endurance software testing in detail.

Initially, to start with, let’s try to understand what Endurance testing is exactly all about and then we will explore all the details about it. I’m sure that this article will really be a perfect guide for those who are new to the Endurance Test Concept.

This article will give you a complete overview of Endurance Testing, including its meaning, need, duration, benefits, challenges, and steps involved along with examples in simple terms to enable you to understand the concept perfectly.

What is Endurance Testing?

The word Endurance means ‘the capacity of something to last or to withstand the wear and tear.’ You can simply call it as durability, lasting power or longevity.

When it comes to the world of software, Endurance test (soak testing or longevity testing or capacity testing) is a type of non-functional testing which is done to check if the software system can sustain under a huge expected load continued over a long period of time. 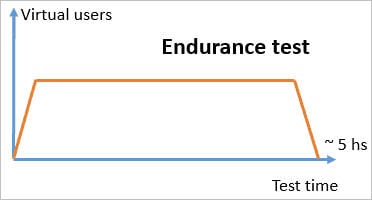 It is one of the performance testing type and a sub-type of load testing.

A memory leak is a failure in a software program to release discarded memory, causing impaired performance or failure.

A memory leak might not have a short-term impact but in the long-term, it slows down the system which leaves no free memory and thus finally leading to application or system crash. Memory leak is an issue which becomes apparent only after a certain period of time.

Hence, we need endurance testing to uncover such issues.

However, it might be possible that with a huge significant load, your application works well for some period say, 1 hour. But, when exposed to the same amount of load continuously for a longer period say, 3-4 hours, your application gets crashed down due to resourcing issue and insufficient disk space.

Another important issue which endurance software testing targets to identify is its performance degradation. It needs to be ensured that the throughput or response times after prolonged use are equivalent to or improved than at the beginning of the test.

Endurance test also verifies if there is a proper connection closure between the layers of the system which would otherwise cause certain modules of the system to hang.

In a nutshell, we can say that the aim of the endurance test is to determine how the system behaves for a long period of sustained use. The major issues which are identified as a part of Endurance testing are memory leaks, performance degradation, database connection issues, etc.

Duration of an Endurance Test

If it’s a 24*7 nonstop operation project, then ideally an Endurance Test should run for 72 hours. The reason being the application should be capable enough to get run unattended on weekends (as weekend support is costly for organizations).

So, we need to test the system exposed to a significant load for a period slightly larger than a weekend. However, as running the test for 72 hours could be too cumbersome, generally, we run the endurance test for 12 hours.

Moreover, there is no hard and fast rule for the duration of a soak test. It majorly depends on factors like clients’ involvement, actual production use, etc. At times, the endurance tests also do run for a year!

The benefits derived from this testing are enlisted below:

The challenges involved in this testing include:

An example where Endurance testing is required and can be used is the Banking application.

On the closing days of the bank, the application is tested to know if the system can sustain under continuous expected load or a large number of transactions for long.

This is a perfect example of an Endurance test.

Steps to Perform this Test

Below is the approach for performing this testing:

This involves figuring out which hardware, software, database (along with its size as it grows with the duration of the test) and OS is required to perform the Endurance test.

It also involves creating a team for performing the endurance testing and assigning the roles & responsibilities within the team. The test environment should be ready prior to the execution of the test and it should be isolated properly from the actual live system.

The test cases should be designed, reviewed and finalized. The test execution strategy should also be built up in this step.

It involves analyzing what would be the duration of each test phase and how many test cycles are required.

This is a very important step in this testing. The test cases are prioritized based on the risk factor.

Risks and issues which a tester might come across during the Endurance test are mentioned below:

Determine the budget, deliverables, and timeframes.

This involves finally kicking off the endurance test.

Close the test cycle based on the exit criteria set up in the test planning phase. It could be based on the defects found, the duration of the test, etc.

There are multiple tools available in the market.

Enlisted below are some of the most popular and useful Endurance Test tools:

In this article, we have learned about what is Endurance Testing? How does it need to be done? Its advantages and disadvantages, and the various tools available.

Some of the key takeaways are: