This tutorial is a complete guide to Grey Box Testing, its advantages, examples, and tools, etc.:

The major objective of this testing technique is to find issues occurred because of the incorrect internal structure or incorrect usage of the application. 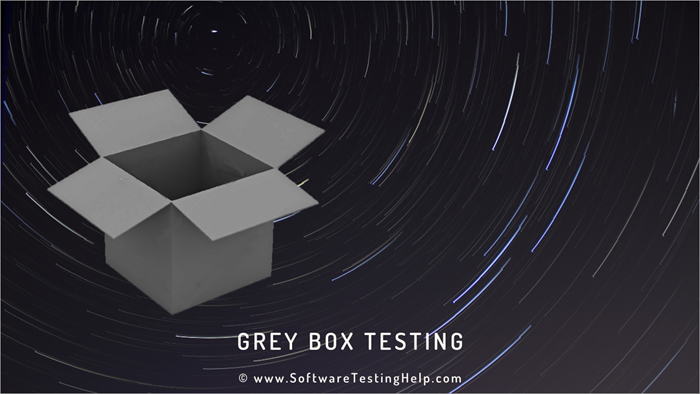 What Is Grey Box Testing

Grey box testing is a software testing technique in which testers do not have complete knowledge about the product, they have limited information for internal functionality and code. They do have information about the requirement and also have the access to detailed design documents.

This testing technique is a combination of Black box testing and White box testing.

Grey box tester has knowledge of the code, but not completely. 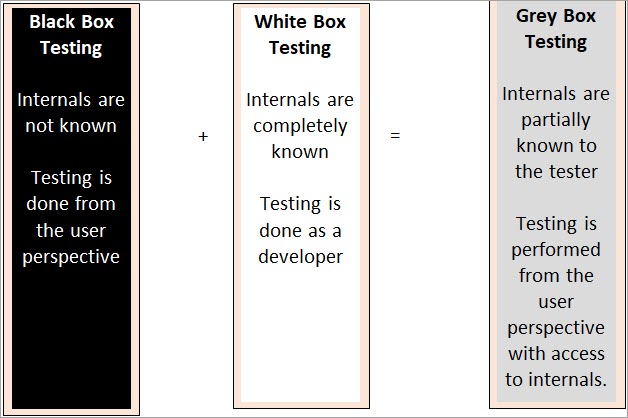 The purpose of Grey box testing is to improve the quality of the product for which it covers both functional and non-functional testing altogether, which saves time and the lengthy process to test the application.

Another purpose is to have the application tested from the user’s perspective rather than the designer’s opinion, and to get the developers enough free time to fix the bugs.

#1) While testing a website, if the tester clicks on any link and it comes up with an error, the Grey box tester can make changes in the HTML code to check the same.

In this particular scenario white box testing is being done by changing the code and as the tester is testing the changes at the front end–black box testing is also being done. Combination of the White box and Black box results in grey box testing.

Using this information, a tester can further analyze the issue and provide the details to the developer rather than just raising the issue to them.

#3) Grey box testers can analyze the log files themselves to find the root cause for the issue. The grey box tester can easily analyze low performance, crashes in the application, or other issues.

Software developers provide all the variables in a program along with the technical and business risks that are linked with them. The matrix testing technique tests the risks defined by the developers.

Matrix technique states all the used variables in a program. This technique helps to identify and remove the variables which are not being used in the program and in turn, helps to increase the speed of the software.

Regression testing is performed when any change is done in the software or any defect is fixed. It is done to ensure that a new change or fix done has not impacted any existing functionality of the software.

This testing technique is used more for complex functionalities or applications, as this technique is utilized when maximum coverage of code is required with minimum test cases and has large test data with n number of combinations.

Pattern Testing is performed based on the previous defects found in the software. Defect record is analyzed for the cause of defects and test cases are created keeping the defects and their cause in knowledge to find defect before the software goes into production.

Let’s go through the steps that are performed for grey box testing.

Step 2: Identify Output
Outputs to be identified for the inputs selected in step 1.

Step 3: Identify the Key Paths
All the major and key paths to be identified for the testing phase.

Step 4: Identify Subfunctions
Subfunctions to be identified to perform testing at the next level, i.e. to test more in-depth into the product.

Step 5: Identify Subfunction Input
Inputs for subfunction to be identified in this step.

Step 6: Identify Subfunction Output
Outputs to the above-selected input for subfunctions to be selected or identified.

Step 7: Execution of subfunction
Test case for subfunction to be executed.

Step 8: Verification of executed subfunction
Verification to be done for the execution done in Step 7 to identify whether the test results are as expected or not.

Step 4 i.e. Identify Subfunction and Step 8 i.e. Verification of the executed subfunctions is to be repeated for the rest of the subfunctions.

Step 10: Repetition of Step 7 and Step 8
Execution and Verification Step to be repeated for the rest of the subfunctions.

Testing a website form wherein providing email id and submitting the form sends an email to the user for confirmation and information.

As a Black box tester – the tester will provide the input as valid/invalid email ids to check for the system behavior.

As a Grey box tester – the tester will have knowledge about the validation, such as email validation will be done using JavaScript on the client-side.

Having the above knowledge tester will add up another test case in his list that is to test the scenarios by disabling JavaScript of the browser.

These are enlisted below:

Q #1) What is Grey Box Testing in Software testing?

Answer: Grey box testing is performed to remove any defects because of issues in the internal structure of the application. This testing technique is a combination of Black box testing and White box testing.

Answer: Grey box testing includes both black box and white box testing. Tester has access to all the detailed documents and requirements. Example: In case the link of a website is not working, it can be checked and changed in HTML directly and can be verified in real-time.

Q #3) What is the advantage of Grey box testing?

Answer: Grey box testing has several advantages. Few of them are mentioned below:

Answer: Grey box testing is defined for the applications where the internal working of the application is not known completely. It is best for web-based applications. For functional and domain testing, it is considered the best approach. This testing is focused more on user perspective than designing.

Answer: It is done by the testers themselves. It is done when testers do not have complete information about the internal structure and working of an application. In this testing, the input is provided on the front end and output is verified at the back end.

This testing technique handles complex scenarios more perceptively than other techniques. It is based on functional specifications and not on source code or binaries.