Portability testing is a non-functional testing methodology that determines the ease or difficulty with which a software component or an application can be moved from one environment to another.

The test results obtained from Portability Testing helps in finding out how easily a software component from one environment can be used in another environment.

A major thumb rule of Portability Testing is that it is to be used only if the software component is to be moved from one environment to another environment. 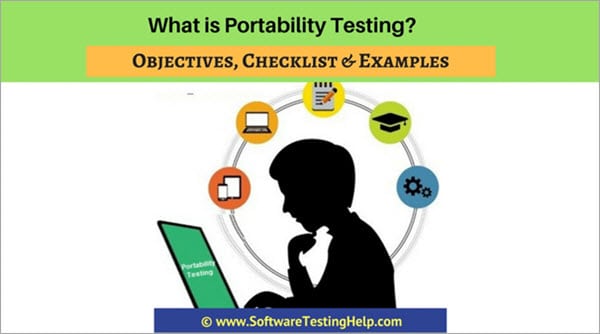 This tutorial gives you a complete overview of the meaning, objectives, attributes, checklist, advantages, and disadvantages of Portability Testing along with some Practical examples in simple terms for your easy understanding.

Difference between Portability and Compatibility Testing

The points given below will briefly distinguish the differences between Portability and Compatibility.

=> Compatibility deals with whether two or more components can be run in the same environment at the same time without adversely affecting the behavior of each other.

Example: A word processor and a calculator running on the same OS such as Windows 10 can be said to be compatible with each other as running one application will not affect the behavior of the other application.

=> Portability deals with moving the component from one environment to another.

Example: A game running on Windows XP is said to be portable if the same game can be run on Windows 7 without any change in the behavior of the game.

The following are the objectives of this testing:

Software testing board has defined certain major attributes of this testing.

Installability is performed on a software that needs to be installed in a target environment.

The following characteristics are validated as part of Installability testing:

Adaptability testing is the process of validating if the system is adaptable to each of the target environments. Using common communication standards between multiple systems can help in improving the adaptability of the system as a whole.

Competitive products of the same domain will be the ideal candidates for replaceability as the product that is being replaced can be much cheaper than the existing product of a competitor.

Compatibility is the ability of two or more components to the existing one in the same environment without adversely affecting the behavior of each other. This testing is especially useful in large systems which include multiple subsystems as part of it.

The subsystems ideally share a common stack area and memory. As a result, an exception occurred on one subsystem can easily propagate to the other subsystem causing the whole application to crash.

Components that fail the compatibility testing requirements have a profound effect on the whole system and hence each component must be tested thoroughly for its effect on the common resources.

For Example, data transfer via Bluetooth between a Windows 10 PC and an android based smartphone can be taken up for Interoperability testing.

For Example, software must be tested in various international languages such as Chinese, Italian, Russian etc.

The checklist includes the requirements that are to be tested as part of Portability Test.

Before proceeding with preparing a checklist, it is imperative to make sure that all the individual components of the system are thoroughly tested and integrated with one another to form one large system.

All the objectives of Portability Testing should be kept in mind for the checklist to be an effective and efficient one.

Portability Testing has its own merits as well as demerits like any other testing. Let’s take a look at them.

Given below are few classic examples:

Portability Testing is generally preferred when there is a requirement for the software component to be moved from one environment to another environment. This testing helps to uncover the defects that are not identified as part of unit testing and system integration testing.

Hence, portability testing is generally preferred when the benefits outweigh the disadvantages.

Hope you would have clearly understood the concept of Portability Testing through this excellent tutorial!