Alpha Testing is a Pre-release activity and one of the types of Acceptance Testing. Here, testing activity is carried out in a much-controlled manner and it is not accessible by the end-users/market.

A newly developed product or updated product undergoes Alpha testing in the Testing environment (which is formally called Developer’s site). Testing is carried out to simulate real-time behavior to match the usage of the product by the end-users in the market.

This article briefs about meaning, need, strategies and procedure of Alpha Testing in an easily understandable way. 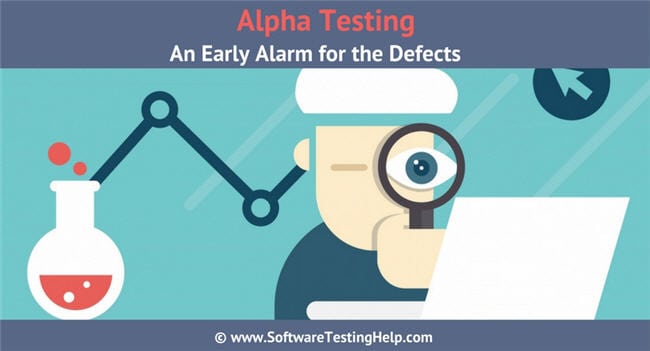 What is Alpha Testing?

Alpha Testing is actually a methodology to assess the quality and stability of a product under test in the testing environment.

This phase mainly focuses on:

Feedback from the team which involved in Alpha Test is gathered to evaluate the Product’s quality and stability, and any suggestions to improve the product are considered.

And the main question that arises in Alpha Testing is “Does the Product Work?”.

This testing is always necessary for the products that are planned to undergo Beta Testing (most of the times, the Alpha test is omitted and directly the phase skips to Beta Testing, which is not mostly recommended).

The reasons behind conducting this test are:

When is Alpha Testing Done?

Again this testing occurs in Phases:

Alpha Test usually takes place in cycles which are commonly known as Test Cycles, each of which will be of about 1 – 2 weeks. The number of cycles depends on the features included for testing and the number of issues uncovered during this test phase.

Stakeholders of Alpha Testing phase will usually be the Engineers (in-house developers), Quality Assurance Team, and the Product Management Team.

Participants in this testing will be testers (usually):

Sometimes, customers or identified end-users may participate in testing the Alpha version of the product.

Either White-box or Black-box testing techniques or the combination of both can be adopted. Also, Acceptance tests can be preferred to be automated as this involves multiple cycles and the tests could be repetitive in each cycle. Acceptance Tests run in this cycle are referred as Alpha Tests.

Like any other testing phase, even this type of testing has the Strategy where goals and plans are well-defined.

The sequence followed from Tester’s point of view:

Benefits of this testing

There are several benefits of this testing. Few of which are given below.

Usage of Alpha Testing at the early stage in Software Development Life Cycle provides a better insight into the product. It always helps to understand the target users’ point of view and experience while using the product.

Performing Alpha Testing formally and strictly helps to meet its objectives successfully and leads to Customer’s happiness. I hope that this article would have given you additional information about Alpha Testing.

1 thought on “What is Alpha Testing? An Early Alarm for Defects”