This Tutorial Covers how to use Gradle to create a Project and Write Tasks in Groovy and run Tasks with Gradle Wrapper Using both the IDE & Build Command:

In this tutorial, we will learn about Groovy and Gradle along with their use to create Gradle build tasks and build projects respectively. Groovy is a multi-faceted language – with concise, familiar, and easy to use the syntax for Java platform and it can be used to write build and automation tasks. 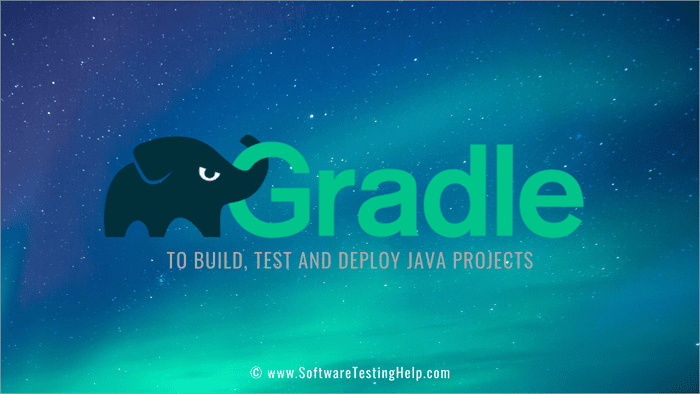 This language glues well with Gradle, which is one of the popular tools used in integrating a developer’s workflow in a CI/CD pipeline.

This tutorial explains Gradle for Java developers. It includes details on how it works; how to use Gradle to build source code written in Java, for deployment on any platform.

It provides plugins for most of the IDE’s and makes it easier to deliver software faster. To follow us along the journey of learning the above-stated concepts, it will be great if you look at the repository of a sample project that we have created on Github.

This section includes the step of installing an IDE – IntelliJ IDEA and Java Development Kit (JDK). The details on the basic concepts in the Groovy language to get ourselves to speed towards writing our first build task are explained with the help of a code snippet.

Install an IDE (Integrated Development Environment) for creating the Java project. We use IntelliJ IDEA (Community Edition) for this tutorial. Please follow the respective links to download and install it on Windows/Mac/Linux.

Download JDK. One needs to sign up for a RedHat account to complete the step. Once it is downloaded, run the setup to install it on your Windows PC. Once it is installed, open the command prompt and run the below-given commands to check whether it is working or not.

The below commands can be used to know where the JDK is installed or not.

Now let us configure the installed JDK with our IDE. Open the Platform settings in IntelliJ IDEA and Add the JDK by following the steps shown below. Please remember that this JDK is applicable to all the projects that you will work on using this IDE.

Step 1: Add the downloaded JDK to SDK under platform settings as shown in the image. 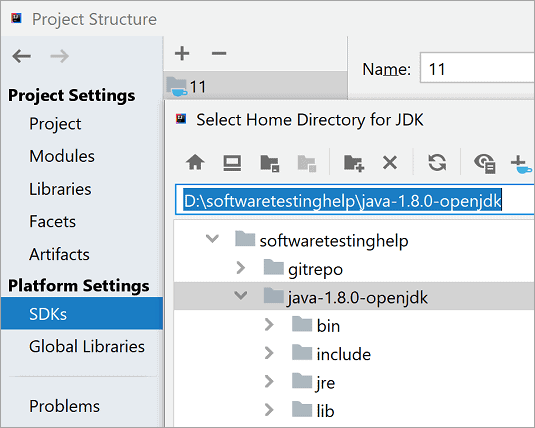 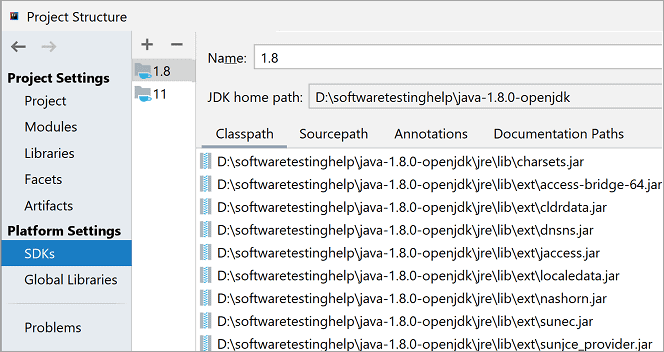 Step 2: Update Project SDK in the project settings as shown in the images 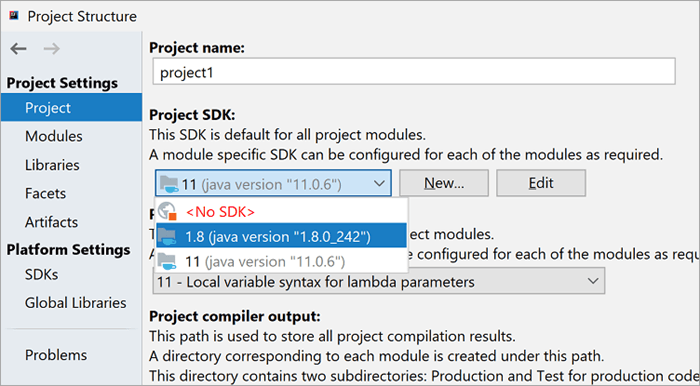 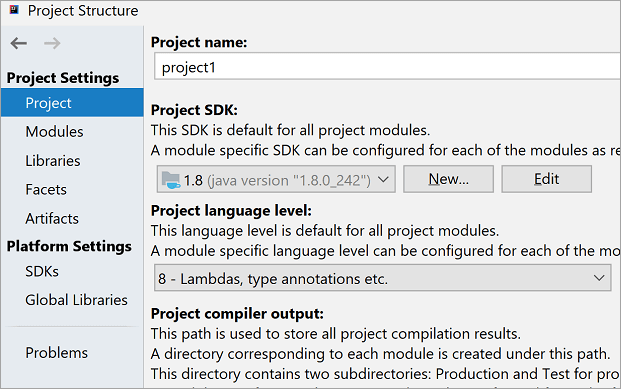 After applying the configured settings, please build the project once using the small green hammer icon in the IDE.

Set Up An Example Project

Steps to clone the project from Github are given below:

Open the IDE by double-clicking the shortcut icon on your desktop. Please close any existing project if already opened. Please remember that Git plugin is by default bundled with IntelliJ IDEA. Thus, please do not install it.

Step 1: On the Welcome Screen of the IDE click on Get from Version Control. 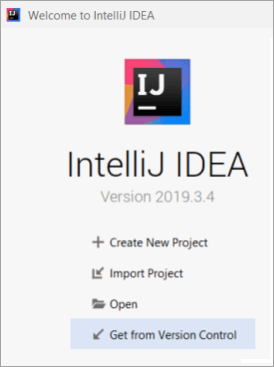 Step 2: Provide the Github repository URL and click on Clone.

Step 3: Click on Yes when the Checkout file prompt is shown. 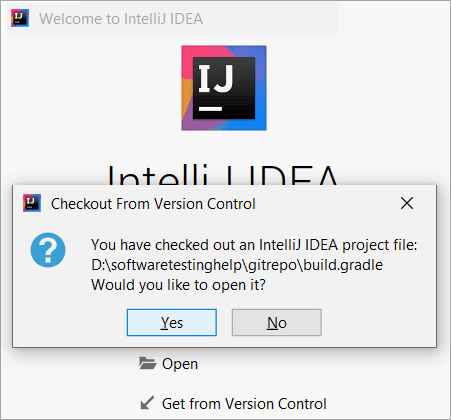 Step 4: Wait for the background process to finish and check the output. 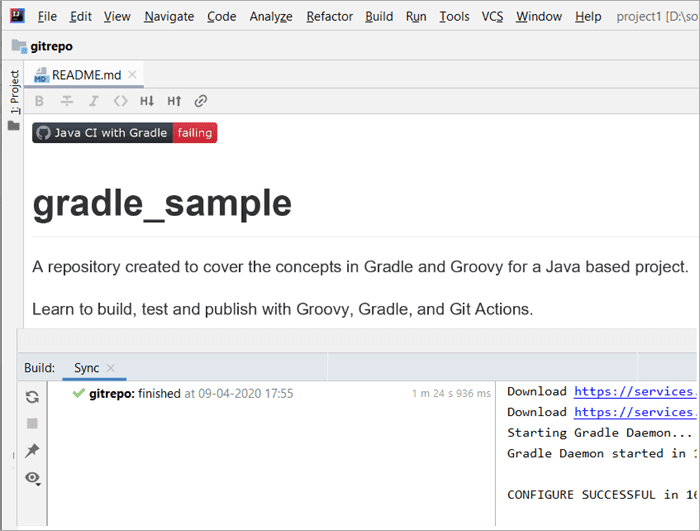 Step 5: Click on the folded Project pane to look at the project structure in the explorer.

In the project, open the Gradle build file called build.gradle using the file explorer of your IDE and write the below-given code at the end of the file.

Now run the first task by clicking Run on the context menu of the play task icon and observe the output of the println inbuilt method of Groovy. We can use “CTRL+SHIFT+F10”  as well. (Please refer to the image below) 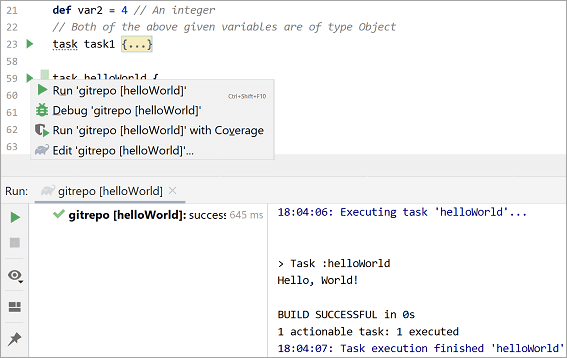 The output should look something similar to the one shown above.

Now that you have learned how to create your first program in Groovy, we can accelerate and learn about the basics of the language. This section will cover concepts such as variable names, syntax, operators, methods/functions/Closures, etc.

We will also cover the concepts that are more relevant from the project perspective such as accessing the properties of a project and importing closures/functions written in another build.gradle file.

Observe the below-given code snippet and comments to learn about various concepts of the language. This code snippet is quite handy for a quick walkthrough and a revision on the concepts of Groovy.

In both the loops, notice that the list has a zero-based index. Further details are mentioned at Groovy.

Now let’s learn about Gradle and see how to run a task.

It is a build automation system. It supports building projects written in multiple languages. In this tutorial, we are using Java. This section explains the method of running Gradle commands from the command line. We are going to use it for building, testing, and deployment of our sample project.

You might already know how important it is to install dependencies in any open-source software project. Gradle can search for dependencies on public repositories such as Maven, Jcenter, and Google.

Mention these repositories in build.gradle file as shown below:

Now mention the compile-time dependencies as shown below.

Check the Gradle version by using the below-given command. 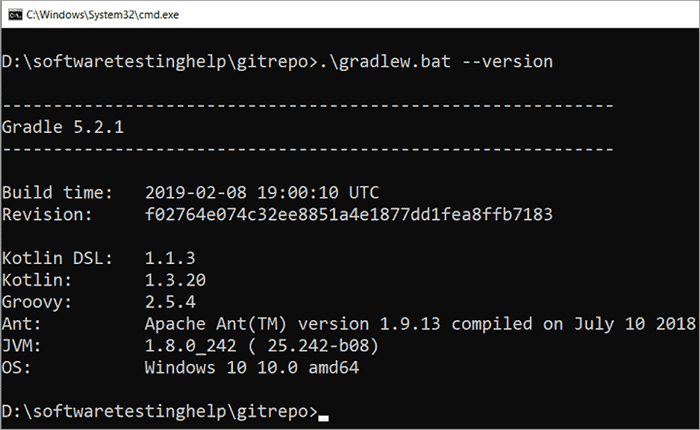 Features And Advantages Of Using Gradle

Enlisted below are some of the features that help in easy standardization and adoption of Gradle as a part of DevOps in an organization.

There are many more features that enable the teams to customize their builds while packaging the software with higher quality. More details on the features are given here.

Now let us move ahead and run a Gradle build task.

Run the command shown below under the project’s root directory to run the build task called task1.

Check the output as shown below. 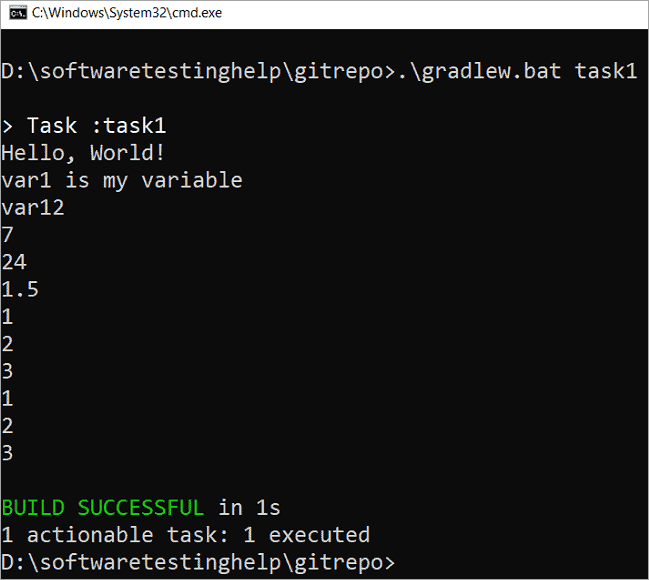 In this section, we will go through the project structure, understand its various components, and build the project.

Structure Of The Sample Project

The sample project under discussion has an src folder with two main directories (folders) viz. Main and test. The main directory has Java source code related to a sample command-line application called HelloWorld.

The test folder has a JUnit test class that has tests to test the above-mentioned methods in our Application. Please check the source code of these tests.

The Version of Gradle is very important and whenever developers want to share their code it is always beneficial to share a wrapper along with the project files. It saves a lot of time as wrapper automatically downloads the declared version of the Gradle.

Documenting the code is considered as one of the most important attributes of a developer. It is a usual practice to share the documentation in html format. Gradle helps in generating javadocs in html format projects. We can generate javadocs using the below command.

Please check the javadoc under build directory in the project and you should see the results similar to the ones shown in the image below. 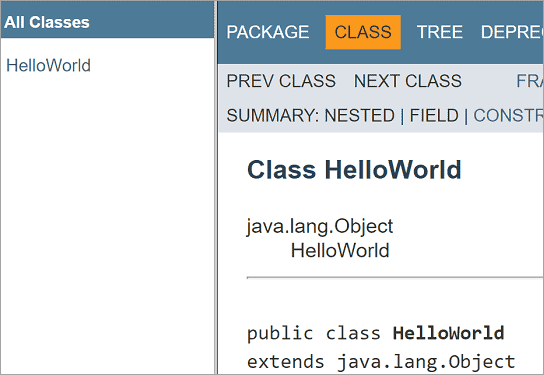 Please follow the javadoc style guide given at this link while writing Java documentation.

Now let’s change the build.gradle file to generate the documentation for test resources as well.

Update the build.gradle file with the snippet shown below

Again run the Gradle javadoc command to generate the documentation for main as well as test sources. 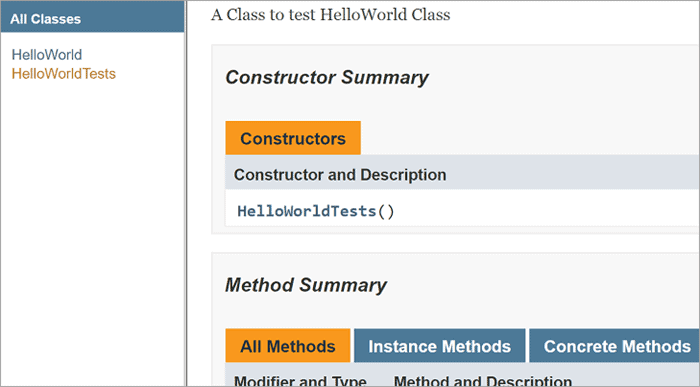 More details on the Gradle build tasks can be seen here.

Command to know more Gradle tasks is given below. 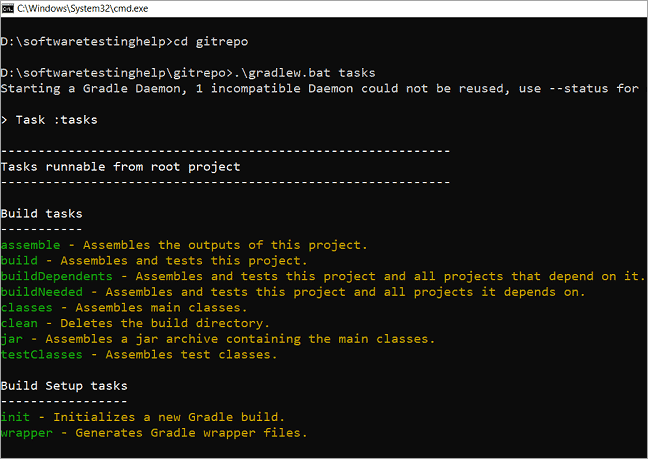 Follow the below-mentioned steps, to build the sample project from the command line:

However, you can also build the project by clicking the small hammer icon in the IDE.

The output of the build command will be as shown below. 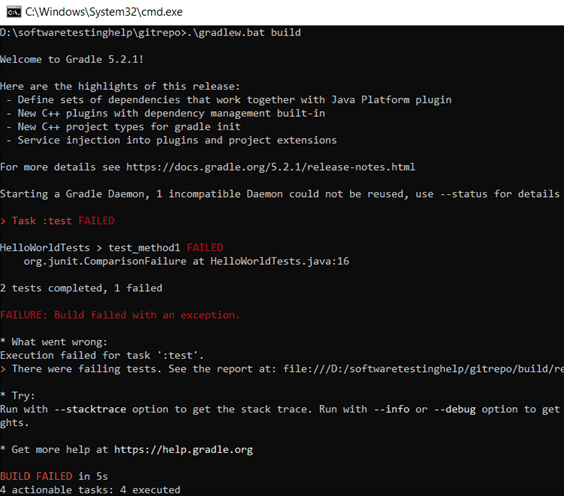 Failures in the build run results are intentional for the purpose of this tutorial and can be neglected.

If you want to see the results of the tests that were run as part of this build, then you can check the reports folder as shown in the image below.

To check the results you can open the index.html file in a browser. 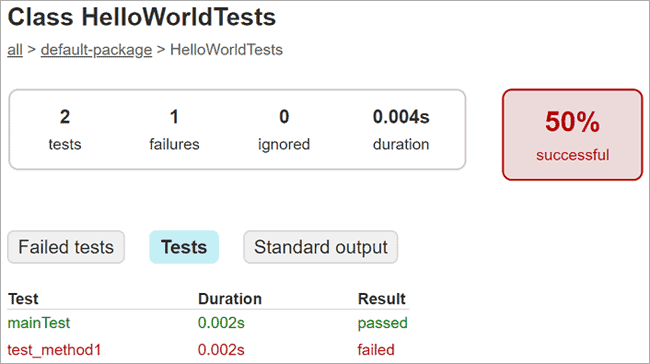 As developers, we have to set up our workflows to build, test, and publish our projects, in order to collaborate with the operations team.

Moreover, setting up an environment by ourselves can be a daunting task and might have repercussions on our productivity. With the advent of a new culture of DevOps, we need to automate our workflows to reduce the challenges, arising out of build failures.

Meanwhile, software projects with developers, who are geographically distributed, need collaboration with the help of SCM software such as Git.

Thanks to Github Actions. Now you can see an additional tab on any Github repository that you create. You can create your development workflows and run them on any Github event such as push, release, pull_request, etc. This is revolutionary in terms of giving the power of CI/CD to the developer-community.

Open the Git Actions configurations at .github/workflows/gradle.yml file in the project. Notice that we are developing our project on Windows and in Git Actions we are testing it on ubuntu_latest. 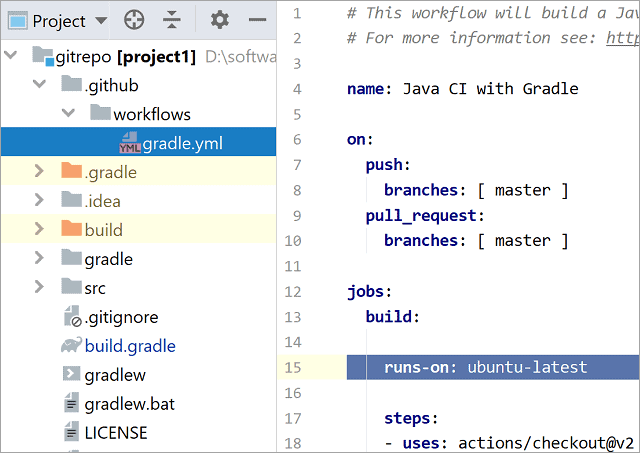 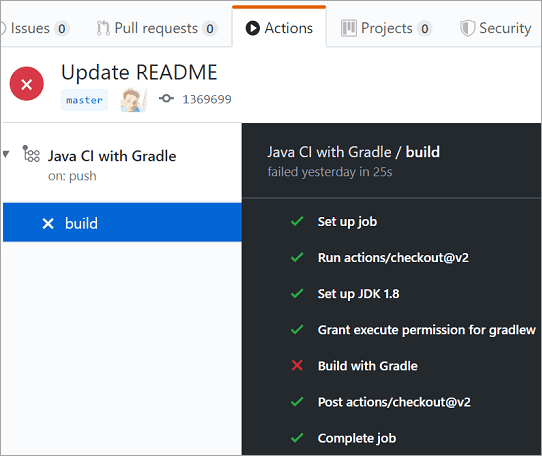 Github Actions also has community-powered workflows that we can leverage on and increase the speed of delivering your project to customers. Based on the status of your build you can decide whether to release the project or not. We have given the example of a pre-release of the repository of the sample project.

Given below are some of the steps for you to try.

Gradle is being used by teams in companies such as LinkedIn, Adobe, Netflix, etc. and it is a great tool to master. Working with Gradle is much easier than working in other build tools such as Maven and Ant.

These days it is all about speed and agility. Learning Gradle and Groovy can help you in adopting DevOps principles more easily.

To summarize, we covered concepts on the creation of a Gradle project, on writing build tasks in Groovy and on running tasks with Gradle wrapper during development using both the IDE and Gradle build command.

We also tested the build on a different target platform such as ubuntu_latest. We can use it with a build status, that can help in making a decision related to a project release.

If you are an automation engineer using Selenium Webdriver, then don’t fail to read our upcoming tutorial on configuring and setting up a Selenium project with Gradle.

Hope this tutorial would have enriched your knowledge on Gradle Concepts!!