The mobile network has empowered the users to do almost all their business, financial, social operations etc., and hence almost all the companies have launched their own mobile applications.

These apps are extremely efficient and they ease our day to day transactions. But there’s always a big concern about the data safety and security. The transactions happen on a 3G or 4G network thereby becoming a feast for the hackers. There is a 100% possibility of the personal data being available to hackers, be it your Facebook credentials or your bank account credentials.

The security of these apps becomes very vital for the business of any company. This, in turn, generates the need for security testing of all mobile applications and hence is considered as an important testing that is carried out by testers for an app. 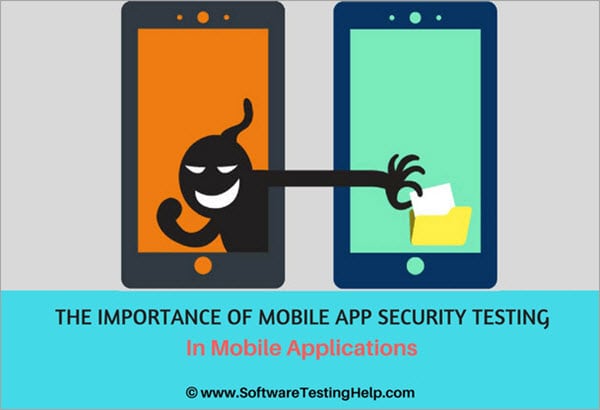 This is extremely important for financial, social and commercial apps. In such cases, the application is neither released nor accepted by the customer if the security testing is not done. 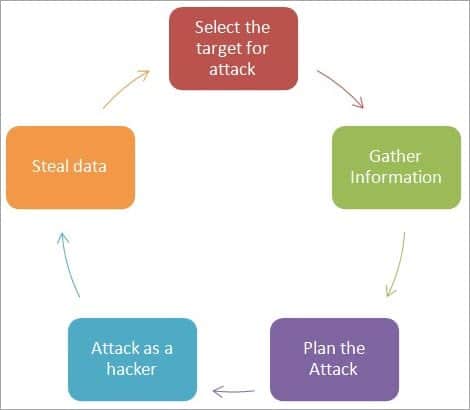 Just like functionality and requirement testing, security testing also needs an in-depth analysis of the app along with a well-defined strategy to carry out the actual testing.

Hence I will be throwing light on the ‘challenges’ and the ‘guidelines’ of security testing in detail in this tutorial.

Under ‘challenges’ we will be covering the following topics:

Under ‘guidelines’ we will be covering the following topics:

Challenges Faced by QAs for Security Testing of a Mobile App

During the initial release of an app, it is very important for a QA to do an in-depth security testing of the app. On a broad level, the knowledge collection of the nature of the app, the OS features and the phone features play a vital role in designing a ‘complete’ testing plan.

There’s a plenty to test and hence it is important to analyze the app and chalk out what all needs to be tested.

Few challenges are mentioned below:

When performing the threat analysis, we need to study the following points most importantly: 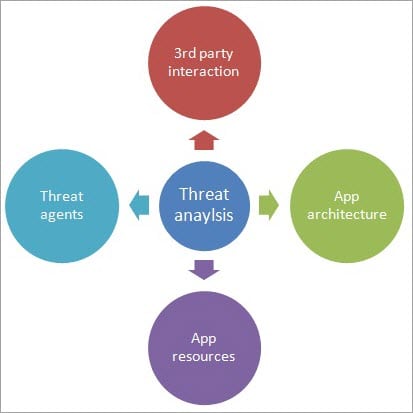 Ideally, under vulnerability analysis, the app is analyzed for security loopholes, the effectiveness of the counter measures and to check how effective the measures are in reality.

Before performing a vulnerability analysis, make sure that the whole team is ready and prepared with a list of the most important security threats, the solution to handle the threat and in case of a published working app, the list of the experience (bugs or issues found in previous releases).

On a broad level, perform an analysis of the network, phone or OS resources that would be used by the app along with the importance of the resources. Also, analyze what are the most important or high-level threats and how to protect against the same.

#3) Top Most Security Threats for Apps

The world has experienced some of the worst and shocking hacks even after having the highest possible security.

There is no specific way to deal with hacks because hacking an app varies from app to app and most importantly the nature of the app. Hence to avoid hacking try getting into the shoes of a hacker to see what you can’t see as a developer or a QA.

(Note: Click on below image for an enlarged view)

Hence people run software which is available in the market to attain full admin access to the phone.

The security threats that rooting or jailbreaking poses is:

#1) The installation of some extra applications on the phone.

#2) The code used to root or jailbreak may have unsafe code in itself, posing a threat of getting hacked.

#3) These rooted phones are never tested by the manufacturers and hence they can behave in unpredictable ways.

#4) Also, some banking apps disable the features for rooted phones.

#5) I remember one incident when we were testing on a Galaxy S phone which was rooted and had Ice-cream Sandwich installed on it (although the last version released for this phone model was Gingerbread) and while testing our app we found that the login authentication code was getting logged in the log file of the app.

This bug never reproduced on any other device but only on the rooted phone. And it took us a week to fix it. 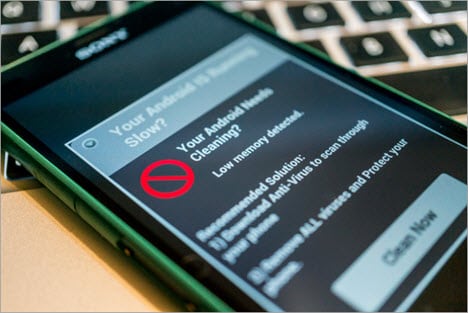 The permissions that are given to an app also pose a security threat.

Following are the highly prone permissions that are used for hacking by attackers: 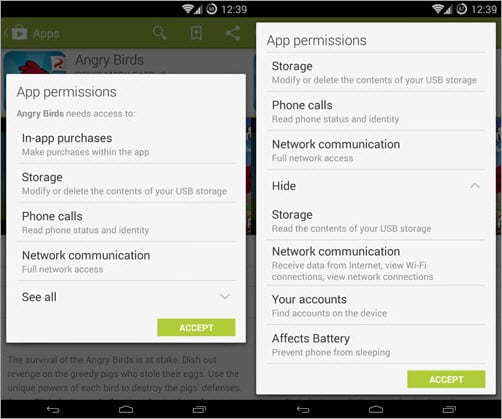 #7) Is Security Threat different for Android and iOS

iOS is less susceptible to security threat when compared to Android. The only reason behind this is the closed system of Apple, it has very strict rules for app distribution on the iTunes store. Thus the risk of malware or malicious apps reaching the iStore is reduced.

On the contrary, Android is an open system with no strict rules or regulations of posting the app on the Google Play store. Unlike Apple, the apps are not verified before being posted.

In simple words, it would take a perfectly designed iOS malware to cause damage as much as 100 Android malware.

Once the above analysis is completed for your app, as a QA you now need to chalk down the strategy for the testing execution.

Given below are few pointers on finalizing the strategy for testing:

#1) Nature of the app: If you are working on an app which deals with money transactions, then you need to concentrate more on the security aspects than the functional aspects of the app. But if your app is like a logistics or educational or social media one, then it may not need an intensive security testing.

If you are creating an app where you are performing money transactions or redirecting to bank websites for money transfer then you need to test each and every functionality of the app. Hence, based on the nature and purpose of your app, you can decide how much security testing is required.

#2) Time required for testing: Depending on the total time allocated for testing you need to decide on how much time can be dedicated to security testing. If you think you need more time than allocated then talk to your BA and manager ASAP.

Based on the time allocated prioritize your testing efforts accordingly.

#3) Efforts needed for testing: Security testing is quite complex when compared to the functionality or UI or other testing types as there are hardly any project guidelines given for it.

As per my experience, the best practice is to have at most 2 QAs perform the testing rather than all. Hence the efforts required for this testing need to be communicated well and agreed upon by the team.

#4) Knowledge transfer: Most of the times, we need to spend extra time on study of the code or web service or tools in order to understand the security aspects (and related testing) of the app. Hence this needs extra time which should be accounted in the project plan.

Based on these pointers you can finalize your strategy for testing.

Guidelines for Security Testing of a Mobile App

The guidelines for Security Testing of a Mobile App includes the below pointers.

Before starting the manual testing on the app, make sure that all your security related test cases are ready, reviewed and have 100% coverage. I would recommend having your test cases reviewed at least by the BA of your project.

Create test cases based on the (above) ‘challenges’ and cover everything right from the phone model to the OS version, whatever and however is impacting the security of your app.

Creating testbed for security testing especially for the mobile app is tricky hence if you have expertise in cloud testing, you can use that as well.

I worked on a logistics app for which we had to do security testing after the app was stabilized. The app was to track the drivers and the deliveries they were performing on a given day. Not just the app side but we also did security testing for the REST web service.

The deliveries done were of expensive items like treadmills, washing machines, TVs etc., and hence there was a great security concern.

Following are some sample tests that we carried out on our app:

Along with functionality, data format and the different methods like GET, POST, PUT etc., security testing is also equally important. This can be done both manually and by automation.

Hence I would suggest to take help from the developers and have them create a dummy web page for web service testing. Once all your web services are ready and stable then avoid manual testing. Updating the web service’s input manually as per every test case is a very time consuming one, hence it is better to use automation tools.

I used soapUI Pro for web service testing, it was a paid tool with few cool features for all REST web service methods. 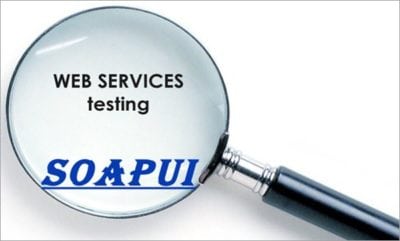 Following are some web service related security tests that I have carried out:

This is usually done on the actual app that is installed on your phone. It is prudent to perform security testing with more than one user session running in parallel.

App side testing is not only done against the app purpose but also the phone model and OS-specific features that would be impacting the security of the information. Based on the challenges mentioned above, you can create matrices for your testing. Also, perform a basic round of testing of all use cases on a rooted or jailbroken phone.

Security enhancements vary with the OS version and hence try to test on all supported OS versions.

Testers find it discouraging to perform security testing on a mobile app as the app is targeted for a plethora of devices and OS. Hence using tools helps a lot in not only saving their precious time but also their efforts can be put to other users while the tests run automatically in the background.

Also be sure that there is bandwidth available to learn and use the tool. The security tools may not necessarily be used for another testing hence use of the tool should be approved by the manager or the product owner.

Following is a list of the most trending security testing tools that are available for mobile apps:

5) Testing for the Web, Native and Hybrid Apps

Security testing varies for the web, native and hybrid app accordingly as the code and the app architecture is completely different for all the 3 types. 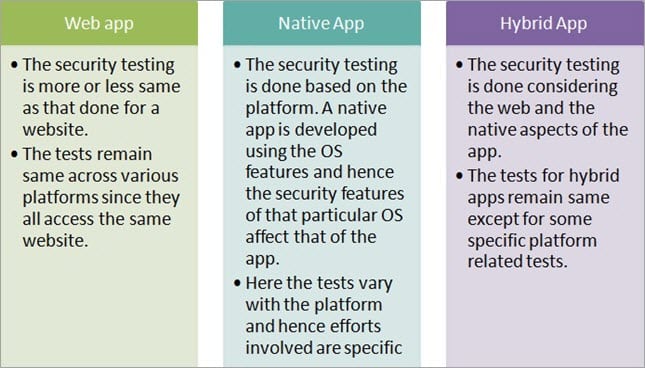 Security testing of mobile apps is a real challenge that requires a lot of knowledge gathering and study. When compared to desktop apps or web apps, it is vast and tricky.

Hence it is very important to think from the point of a hacker and then analyze your app. 60% of the efforts are spent in finding the threat prone functionalities of your app and then testing becomes a little easy.

In our upcoming tutorial, we will discuss more on Automation Tools for Testing Android Applications.