In our previous tutorial on Introduction to Interactive Voice Response IVR Testing, we learned about the Architecture & technology used in IVR basic, IVR call flows, etc.

Here in this tutorial, we will focus on why automation is required for IVR testing and what are the various IVR tools that are used for IVR automation in a detailed manner along with the concerned examples for your easy understanding. 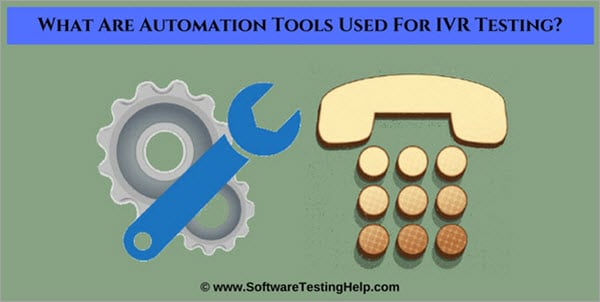 In this modern era of technology, for any technical difficulty, each customer wishes to get the solution by sitting at home or during travel or while rushing to the meeting.

A customer does not wish to visit any branch or office for a solution to the problem. This will be possible with the help of IVR system as it is an automated system which provides a required solution to the end user.

For Example, in case of a mobile operator, if a user has an issue in the monthly billing then with the help of IVR system they can raise a complaint and get the solution without visiting the branch or office. This will result in thousands of call to the call centers for different problems. Hence, it is necessary to test the performance of IVR application to remain in the competition.

In load testing, in order to emulate the behavior of call center, different scripts are generated. It is necessary to test the behavior of the IVR application under heavy load of calls. This ensures if the system is configured in such a way to handle peak load and responses appropriate to the caller.

This emulation is similar to call center environment i.e. while running a call all the features like call pick-up, call hold, call transfer, tone dialing etc are available.

In this tutorial, we will be focusing on two main tools which are used for IVR testing and they are:

Before proceeding with automation in IVR, let’s first understand why automation is required in Interactive Voice Response (IVR):

Testing of IVR system is a monotonous job and this repetitive task may cause a manual error too. In order to test the end to end flow of IVR system, a tester needs to dial the same number and route through different menu options which become more complex as the tester goes deeper into testing.

This, in turn, may be a boring job for the tester, as they have to listen to the prompts played by the IVR and need to provide input based on the prompt. So there are chances for the testers make a mistake during testing.

A tester needs to test each and every option carefully and it is quite a tedious task. As each menu can have multiple sub-menus and each sub-menu have multiple options, a tester has to test all positive, negative and error-prone scenarios thoroughly. This entire process is a time-consuming one and it involves high costs for the organization.

Due to all the above reasons, it is necessary to automate IVR application testing. There are several automation tools available which impersonate the human effort to dial an IVR specific telephone number and can provide DTMF inputs to the IVR system. Nowadays large companies are using an automation tool to test their IVR application.

Cyara is the world’s leading market provider and monitoring tool. Cyara provides an automated way to interact with a channel of customer experience know as IVR. It is used to simulate the IVR application so that end to end testing can be possible hassle free. For many organizations, the Cyara platform automates IVR development and testing of the customer experience.

Cyara platform allows the  organizations to help in their Functional, Load and Regression testing in the following way:

Load Testing: Cyara platform is useful during load testing as the newly developed capabilities are staged for deployment. Cyara platform simulates the strain on the contact center and verifies that systems weakness and does not expose to the customer and thereby the IVR system performance remains competitive.

Regression Testing: These newly developed functionalities usually under-go different changes or small enhancements. The Cyara platform is useful to retest the current and existing functionality. Using Cyara platform, you can test any modification in IVR system to check it does not have a negative impact on the other parts of the system.

An automatic notification will be received in case of any failure which will expedite the fixing process and will not impact on the customer experience or timelines.

In a real-time call center office, thousands of calls are received at the same time in different departments for various issues. Cyara platform generates such calls so that each call has a unique call flow from a unique customer.

Using these calls, the call flow is generated and used throughout during the testing process to mimic real-time customer interaction. These calls can be placed at a regular interval or at an interval defined by the tester. In case of any failure of call, you will get an automatic notification with the detailed information.

Testers will know these issues or problems well even before they actually occur in production so that appropriate action can be taken immediately to avoid any bad customer experience, slippage of schedule or slow IVR system performance.

Steps on how to import, edit and then execute the test case using Cyara tool have been explained below:

1) The below screen shows the Cyara tool and the different options on the LHS: 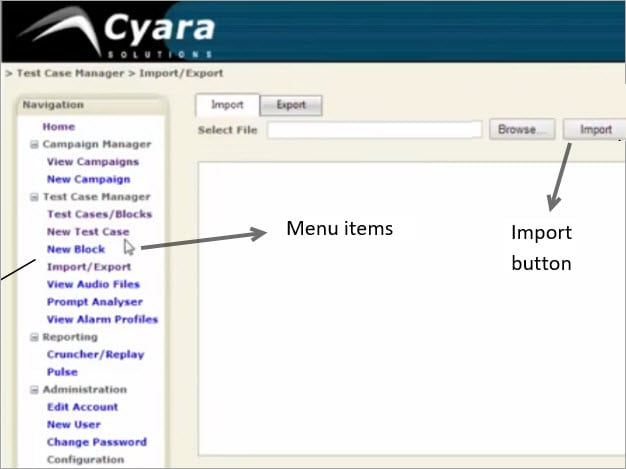 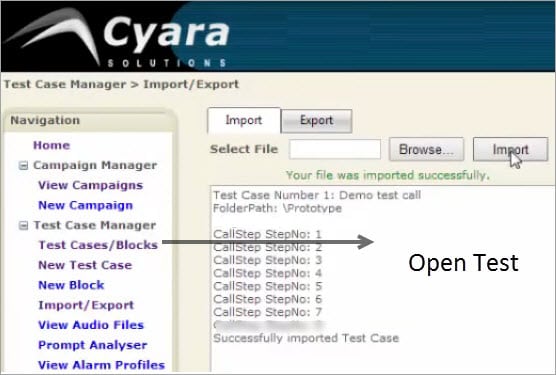 3) Click on the LHS menu item “TestCases/Blocks” and it opens the test case in Cyara which was imported successfully.

Given below is the screenshot:

4) Click on the “edit” button (as shown in the above figure) and the test case will be executed in the EDIT mode. 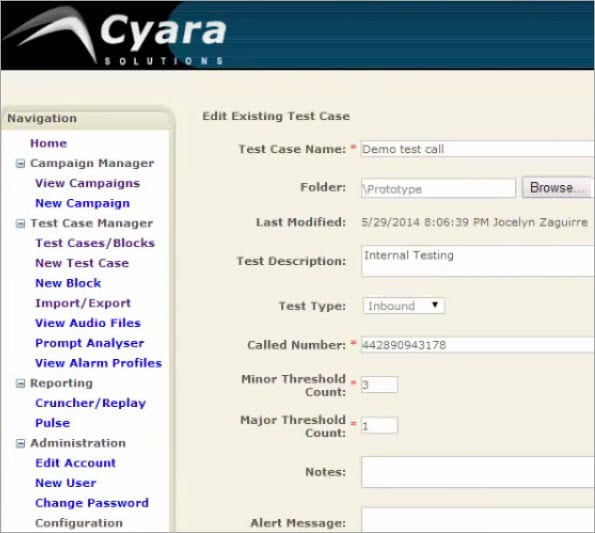 5) Existing associated steps with the test cases are shown below: 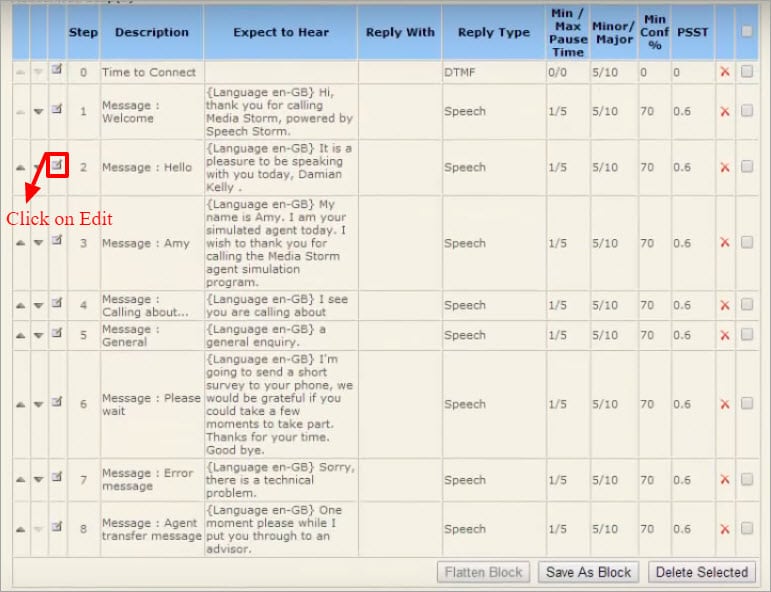 6) Once you click on the edit mode, the corresponding step will be available for editing on the screen immediately. If you want to add the new step in the existing test case using Cyara then scroll down and the below screen will be displayed. 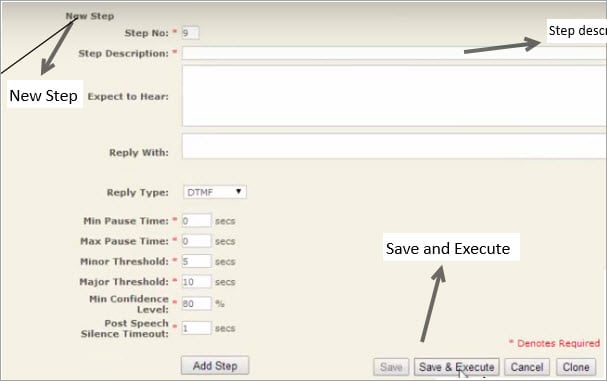 Hammer is an automation testing tool for IVR which was developed by Empirix System. It identifies and corrects the experience related problems before any system goes into production. Hammer tool measures the performance issues, configuration problems, issues related to the IVR prompt or IVR response time.

Using Hammer tool, a tester can emulate live like environment. We can dial IVR line and can verify customer and proceed with a further transaction. DTMF and voice inputs are possible using Hammer and it ensures that appropriate IVR responses are received to the caller. For each call, it measures the response time for IVR database and the response time for the IVR host system.

Check the official link for more details of Hammer tool.

Given below is a basic sample image of Empirix Hammer which will give a basic end to end flow of IVR system using Hammer tool: 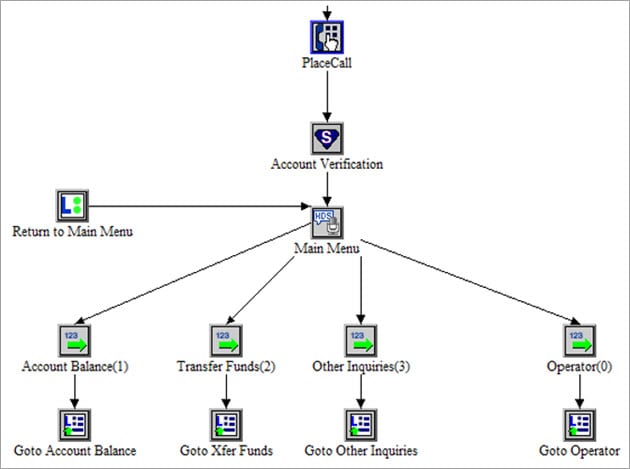 IVR automation is very cost effective as it gives a clear and concise output to the customer. Manual testing of IVR system become boring as the tester has to listen to the same prompts repeatedly and also same repetitive input needs to be given to the IVR system, which in turn may cause failure in the system.

With the help of automation tool, this possibility can be completely removed. Any change can be tested quickly and new call flows can be developed using such tools.

Hope you would have got a clear idea of which IVR tool to opt for!!